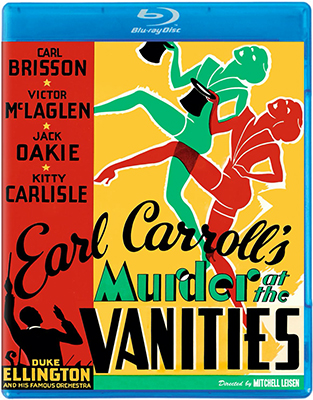 A murder mystery set behind the scenes of a bustling Broadway review forms the basis for this bawdy pre-code curio from 1934. Earl Carroll was an economy class variation on Florenz Ziegfeld, a singular-minded Broadway impresario whose revues were celebrated more for their scandalous trimmings than artistic elan. We open with the curtain about to lift on his latest creation, but the master entrepreneur is nowhere to be found. Minutes prior to showtime, his second in command, Jack Ellery (Jack Oakie), receives a call that, similarly to Fred MacMurray’s final seasons on “My Three Sons,” finds Carroll literally phoning in his performance, this one from a sickbed in Atlantic City. For safety’s sake, the creative force behind Earl Carroll’s Vanities is not vain enough to make an appearance in a film that takes place at one of his theaters and contains in its title the word “murder.”

Scrawled above the stage door we find the club’s mantra writ large: “Through these portals pass the most beautiful girls in the world.” (And Victor McLaglen.) Pan down to reveal a washer woman replica of Marjorie Main exiting with a mop and bucket in tow. Lieutenant Murdoch (McLaglen) of the homicide squad shows up minutes prior to showtime looking to impress a skirt, but the house is packed and his request for two on the aisle is playfully ignored by friendly enemy Ellery. The first third of the picture is committed to establishing alibis and/or motives for the major players. When first we meet Ann Ware (Kitty Carlisle) and her strapping European beau Eric Lander (Carl Brisson), the couple are in a secluded rendezvous rehearsing the prohibition era victory chant, “Cocktails for Two.” (The popular standard, written by Arthur Johnston and Sam Coslow, debuted here.) It’s the happiest night of Ann’s life — she and Lander are set to wed after the show — and absolutely nothing can spoil it, except, perhaps the occasional unexpectedly shattering mirror or unsecured klieg light that comes within inches of beaning her. (It’s around this time the director makes a cameo as the orchestra conductor.) Kitty Carlisle never remarried after the death of her husband playwright Moss Hart in 1961. She spent the remainder of her career as panelist on Goodson & Todman game shows, dressed to the nines as though attending the State Ball at Buckingham Palace. But her real claim to fame was riding Groucho’s coattails with her celebrity-by-association appearance as Alan Jones’ romantic lead opposite the Marx Bros. in A Night at the Opera.

Normally I’d issue a spoiler alert, but Helen Keller blindfolded in another theater could spot the killer. In a startling role reversal, it isn’t the butler whodunit but the maid, a starstruck, never-been-kissed wardrobe mistress named Norma (Dorothy Stickney). The mere mention of Mr. Lander’s name is enough to turn the black dots in the center of Norma’s iris into pulsating heart-shaped orbs. Lander’s ex, Rita (Gertrude Michael), can barely contain her rage when chatterbox Norma lets slip news of the pending nuptials. With Norma on her knees adjusting Rita’s shoe, a fit of jealousy-stoked pre-code fervor overtakes her mistress. Upon ensuring her that she’s “a broken-down clown,” Rita punctuates the insult with a kick to Norma’s chest that sends her reeling and, in doing so, causes the audience to take its eyes off the real culprit, but not for long. Next in line of villainous succession is Helene Smith (Jesse Ralph), the matronly, all-ears seamstress who practically goes full-somnambule as the scantily-clad showgirls dish dirt. Just because Helene is Lander’s mother doesn’t make her incapable of pulling a pair of scissors on Sadie Evans (Gail Patrick), the female dick hired by her son to dig up dirt on Rita. Helene was accused of murdering a guy 30 years ago and Rita has evidence that could clear her name. Sadie is the first to die, her body found in the rafters with Rita’s hat pin piercing her heart. Murdoch has a nasty habit of exposing Sadie’s corpse to any potential suspect within eyeshot starting with Rita and Mrs. Smith.

We interrupt this review with a bit of tech talk. An embryonic example of a zoom-in can be found at precisely 12:38 when we close in on a hand sawing away at a pulley rig. The first true zoom lens, one which held sharp and consistent focus as a twist of the outer ring changed focal length, was patented by Clive C. Allen in 1902. Bell and Howell introduced the Cooke “Varo” 40–120 mm lens for 35mm movie cameras in 1932. The lens didn’t catch on until decades later making it difficult to pinpoint Hollywood’s first recorded telephoto zoom shot. The earliest example I’ve found dates back to Rouben Mamoulian’s Love Me Tonight release in 1932.

The musical numbers are traceable to Busby Berkeley’s chorines minus the anal-retentive overhead camera work. When it comes to staging the revue, director Mitchell Leisen can best be described as the anti-Busby. Berkeley’s vision stretched far beyond Broadway’s limiting proscenium arch, assuming the kind of vast expanse that only a Hollywood soundstage could afford. The biggest theater in the land couldn’t contain but a handful of the leggy beauties needed to pump life into Berkeley’s large scale kaleidoscopic flights of fancy. As mounted by Leisen, the musical numbers here feel very much at home on a stage. The closest Leisen gets to BB are the ornate compacts that open like clamshells to reveal showgirls reflected in giant mirrors. If anything, this points more in the direction of MGM’s stodgy The Great Ziegfeld — give or take the bevy of braless beauties shaking their fans — mixed with equal parts Broadway Melody, Gershwin’s Girl Crazy and The Phantom of the Opera.

You’re more likely to leave the theater humming “Cocktails for Two” or “Where Do They Come From (and Where Do They Go)?,” but the number destined to stick in your mind is Michael’s smokey rendition of “Sweet Marijuana.” What were the scenarists smoking? What cannabis has to do with a cactus patch blossoming with topless chorus girls clutching their breasts is anybody’s guess. Mescaline, maybe, but pot? When interviewed for the documentary Complicated Women, Carlisle confessed to thinking that marijuana was a Mexican musical instrument. The reason the number got past the censors? At the time of the film’s release, marijuana was not deemed an illegal substance.