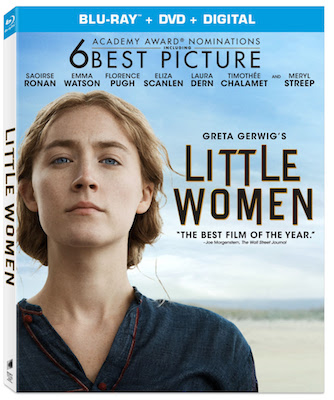 The latest version of Little Women, masterfully directed and adapted by Greta Gerwig, manages to find the modern sensibilities of Luisa May Alcott’s signature work while retaining all the trappings of its mid-19th century period setting.

Gerwig takes Alcott’s semi-autobiographical coming-of-age novel that was originally published in two volumes in 1868 and 1869, and expertly translates the classic tome into the language of cinema, eschewing the linear narrative of the book and previous adaptations in favor of a flashback structure that better contrasts the childhood and adult lives of its characters.

The core of the story remains centered on the lives of the March sisters — Jo (Saoirse Ronan), Meg (Emma Watson), Amy (Florence Pugh) and Beth (Eliza Scanlen) — growing up in Massachusetts around the time of the Civil War.

The film is filled with wonderful performances, anchored by Ronan’s confidence as Jo, and Pugh’s radiance as the bright-eyed Amy (both were nominated for Oscars). The exquisite period set design and (Oscar winning) costumes make for a film loaded with delightful visual touches that would make it worth viewing for those reasons alone.

But shifting the narrative back and forth between the two timelines allows Gerwig to focus on how the characters’ adult lives are practically responses to specific events of their childhoods, in a way that no doubt keeps the material fresh even for those who are fans of the novel or have seen the countless other adaptations of it.

Gerwig’s other spin on the material involves layering more elements from Alcott’s real life even more so than the original novel did. Historically, Jo is most often described as the most direct analog for Alcott in the story, as she’s the one who ends up writing about her sisters. And, as such, she remains the primary character of the film. But, according to Gerwig in the Blu-ray bonus materials, all the characters have some element of Alcott in them. In the very good nine-and-a-half-minute “Greta Gerwig: Women Making Art” featurette included with the Blu-ray, Gerwig relates that examining in her lifelong love of the novel in preparing to make the film, she realized that Jo was the hero of her childhood and Alcott is the hero of her adulthood.

Indeed, one of the best elements of the film is an ending that leaves much open to interpretation while honoring what Alcott once said was her original intent for some of the characters.

Gerwig’s script, while faithful to the original dialogue, plays up the artistic interests of its characters, emphasizing the struggles of the creative process, and how artists often face the choice of sacrificing the integrity of their visions for commercial realities (such as when a publisher declares to Jo that a novel with a female protagonist better see her married off by the end. Or dead.)

In crafting a screenplay that spoke to her as a 21st century female filmmaker, she suggests that this new film version becomes somewhat autobiographical for her as well.

Other featurettes on the Blu-ray include the 13-minute “A New Generation of Little Women,” offering interviews with the cast and several of the filmmakers about the origins of the project, plus the nine-minute “Making a Modern Classic,” about looking at the story with a modern lens. The disc also includes a three-and-a-half-minute “Little Women Behind the Scenes” promotional video, and three minutes of hair and make-up test footage.

The best extra, in addition to the reflections from Gerwig, is undoubtedly “Louisa’s Legacy: Little Women and Orchard House” (labeled as “Orchard House, Home of Louisa May Alcott” in the menu), a 10-minute mini-documentary about Alcott’s real life and family. Hosted by Jan Turnquist, executive director of Louisa May Alcott’s Orchard House (the family home where she wrote Little Women), the video discusses what aspects of the book are based on reality, and the impact of the family’s real-life stories on the film.

The video also details the story of Alcott’s house, an old country home from the mid-1600s that has been rescued from destruction at least three times, most recently in 2002 when the walls were shored up and the foundation completely rebuilt to stop the house from sinking into the ground (the pictures of the house being propped up over a giant hole in the ground is rather striking). The real home ended up serving as the basis of the March house in the film.

Interestingly, while this is the seventh movie adaptation of Little Women, not to mention numerous television and stage productions of it, not as much attention has been heaped on Alcott’s further adventures of the characters. Little Women was the first of what would end up being a March family trilogy, followed by Little Men and Jo’s Boys.

There have been three movie versions of Little Men, two of which were notably made more than 80 years ago, and a handful of television projects. But to date, there hasn’t been a Jo’s Boys movie — only an obscure 1959 BBC miniseries, as well as part of a Japanese anime television adaptation of the trilogy in the 1980s and ’90s.