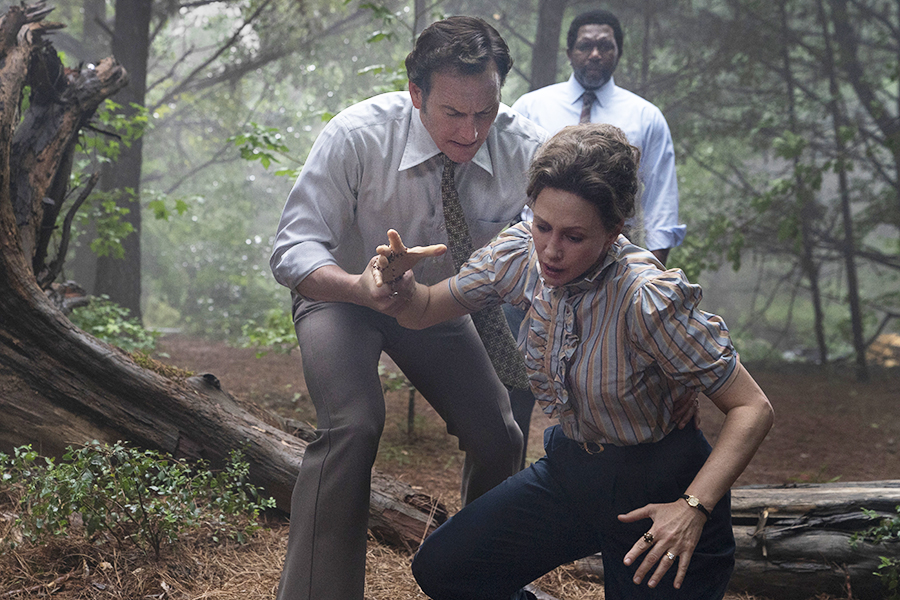 In its second week, Warner’s The Conjuring: The Devil Made Me Do It claimed the top spot outright on the NPD VideoScan First Alert chart, which tracks combined DVD and Blu-ray Disc unit sales, the week ended Sept. 4.

The third “Conjuring” movie had been relegated to the No. 2 spot the previous week as a result of its availability in a three-movie franchise collection, sales for which were tabulated separately.

The beneficiary of that technicality, Lionsgate’s Hitman’s Wife’s Bodyguard, dropped to No. 2 on both the overall disc sales chart and the dedicated Blu-ray Disc sales chart after two weeks in the top spot.

On the Blu-ray Disc chart, Conjuring 3 dropped to No. 3 with 81.9% as many sales as the top Blu-ray seller, with the three-film collection selling 16.4%. The combined tally would have put Conjuring 3 0.1% ahead of the reported No. 2 Blu-ray Disc seller, which was Hitman’s Wife’s Bodyguard, which sold 98.1% as many copies as the top title.

However, it would not have been enough to surpass the No. 1 Blu-ray Disc seller, Warner’s direct-to-video animated actioner Mortal Kombat Legends: Battle of the Realms, which was released only in Blu-ray Disc and 4K Ultra HD Blu-ray combo packs. The newly released sequel to last year’s Mortal Kombat Legends: Scorpion’s Revenge was No. 6 on the overall disc sales chart. The 4K Ultra HD version accounted for 32% of its total sales.

Sony Pictures’ Peter Rabbit 2 maintained the No. 3 spot on the overall disc sales chart, but dropped to No. 6 on the Blu-ray Disc chart.

The week’s top new release on the overall disc sales chart was DreamWorks Animation’s Spirit Untamed, from Universal Pictures. The animated film, a spinoff of 2002’s Spirit: Stallion of the Cimarron, tells the story of a girl bonding with a wild horse and earned $17.6 million at the domestic box office. With just 43% of its sales coming from Blu-ray, it was No. 5 on the Blu-ray Disc chart. A DVD-only two-pack of both “Spirit” movies was No. 38 overall.

The No. 4 Blu-ray seller, and No. 5 overall, was another new release, Warner’s In the Heights, the adaptation of the Lin-Manuel Miranda stage musical. The critically acclaimed film underperformed at the domestic box office with just $29.9 million, though it was available concurrently for streaming on HBO Max. Blu-ray Disc formats accounted for 61% of its total sales, with 19% of the total coming from the 4K disc (meaning 39% of sales were DVD and 42% were regular Blu-ray).

Among other newcomers in the top 20 charts, Sony Pictures’ football drama 12 Mighty Orphans debuted at No. 14 overall and No. 9 on the Blu-ray chart, with a 31% Blu-ray sales share.

The release of Arrow Video’s new collector’s edition of director David Lynch’s 1984 adaptation of Dune pushed that title up to No. 11 on the Blu-ray Disc chart and No. 46 overall. Blu-ray Disc accounted for 96% of its total sales, with the new 4K Ultra HD edition comprising 69% of the total. The 4% of DVDs of the title sold are likely legacy versions previously released by Universal Pictures. A new adaptation of Dune distributed by Warner Bros. and directed by Denis Villeneuve arrives in theaters and HBO Max Oct. 22.

On the Media Play News rental chart for the week ended Sept. 5, Hitman’s Wife’s Bodyguard was No. 1 for the third week, with Peter Rabbit 2 repeating at No. 2.

The Conjuring: The Devil Made Me Do it slipped to No. 3, followed by Paramount’s A Quiet Place Part II at No. 4, and Spirit Untamed at No. 5.