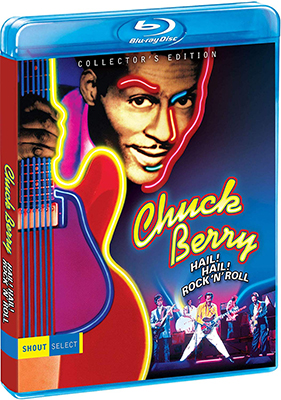 Keith Richards wanted to give Chuck Berry a backup band he deserved for once as part of a splashy St. Louis tribute concert that Taylor Hackford then filmed — and in doing so, gave rock’s most seminal pioneer (IMHO, but a whole lot of folks agree) the movie he deserved as well. My pick for Hackford’s top fictional achievement would be Dolores Claiborne, but 1987’s Hail! Hail! Rock ‘n’ Roll aces even it. At the time, the Berry doc even charmed the selection committee into giving it a deserved slot at the New York Film Festival (I remember the press screening well).

Less a standard fluid concert than key Berry performances by him and others broken up un-jarringly by interviews (of him and others), H-H doesn’t brandish the reputation of The Last Waltz or Stop Making Sense, which should be rated as masterpieces in anyone’s book. But when you throw in the truly blockbuster extras on Shout! Factory’s new Blu-ray carried over from Image Entertainment’s lesser-seen deluxe DVD (at the time, there were two), the historical standing isn’t that subordinate. More on these later, but I’ll bet a lot of fellow Boomers who were present at rock’s creation aren’t even aware they exist. And with Blu-ray, the colors are more vibrant.

No profiler was ever going to penetrate Berry’s psyche all the way. The St. Louis native with a well-earned chip in his shoulder was a complicated dude who appears to have spent his entire life trying to improve himself, his intellect and outside insurance-policy job skills like painting and hairdressing — yet wasn’t bothered at all by flying into a town and employing some pickup band he’d just met at the airport for an on-the-fly concert. The two times here where Berry demands that Hackford stop his camera are during attempted discussions of the subject’s myriad infidelities (amid a marriage that was apparently both lengthy and happy) and Berry’s imprisonment in 1962-63 for violating the Mann Act. Finally, in a delightful bonus interview here with Robbie Robertson, Berry opens up a little about the latter but is still guarded enough to refer to his prison time as “when I went away.”

Like all the British rockers who grew up on Berry — and, thanks to a lifetime of adulation, facilitated his post-pokey career resumption as a rock force at least for a while — Keith Richards was in awe of Berry’s professional contributions to the force that engendered their careers. Though Richards soon came to know, if he didn’t already, that he was dealing with a stubbornly mercurial force who liked to mix it up even with people trying to help him. As Richards puts it in one hilarious aside late in the picture, Berry “gave me more headaches than Mick.” (This is second only to the howler in Richards’ great autobiography where he likens Jagger’s solo album to Mein Kampf — that is, something that everyone buys but no one actually reads.)

Berry’s capacity to sprout gray hairs on others is what we see, both in the documentary itself and in the bonus extras. We see Richards and Berry arguing during rehearsal. We see, in one of the supplements, Berry failing up to show when Hackford has planted an entire camera crew on a street to shoot him. Hackford, again in the extras, relates how arduously he and Richards worked getting Berry to allow Etta James’s participation in the concert because he erroneously pegged her as a minor artist at Chess Records (one, BTW, who later rated an excellent three-disc tribute set by the label). Naturally, Berry came to love her, and their late-film duet on Rock ‘n’ Roll is, for me, the highlight of the movie out of multiple contenders. I’m also still trying to get over James noting that Minnie Ripperton was the person answering the office phones at Chess.

So we’ve got Richards, we’ve got Berry’s longtime (make that all but “forever”) pianist Johnnie Johnson and a guest lineup that includes the likes of Eric Clapton, Julian Lennon, Linda Ronstadt and Robert Cray contributing a bountiful array of the best-known Berry standards (respectively, “Wee Wee Hours”; “Johnny B. Goode”; Ronstadt’s “Back in the U.S.A.” — another huge high point); and “Brown-Eyed Handsome Man.” Plus Berry solos, with punchy backup, of “Little Queenie,” “Carol” (in rehearsal), “Sweet Little Sixteen,” “Too Much Monkey Business,” and the list goes on.

This is basically my childhood passing before my eyes. As a 4- and 5-year-old, I sporadically listened to DJ Alan Freed on radio out of Cleveland (about 70 miles away from me at the time), but my real current-pop education began c. 1953 listening to WJR’s top-40 countdown on Saturday mornings out of Detroit — which means I also heard a lot of Eddie Fisher, The Four Aces and Patti Page. When suddenly, in summer of 1955, the “45” section in my nearby grocery made room for Fats Domino’s “Ain’t That a Shame” (the B-side was “La-La”) and Berry’s “Maybelline,” I instantly knew some kind of sea change was upon us, even if that term wasn’t yet in my vocabulary.

Compounding the doc’s historical, nostalgic and other time machine-like delights is its permanently invaluable (and more so with the years) interviews of rock legends and, to employ Reds parlance, “witnesses” to the early rock era. Some of these clips are in the actual feature while others are in an extended bonus section and with participants not to be believed: Little Richard, Bo Diddley, Jerry Lee Lewis, The Everly Brothers, Willie Dixon, Roy Orbison, Sam Phillips, Ahmet Artegun and Bruce Springsteen, who, as a wee lad, was once a member of one of those makeshift groups that backed up Berry. Jerry Lee is often photographed holding a glass of something that I suspect isn’t Vernor’s Ginger Ale. This may or may not explain why he is so obnoxious here, though more so in the bonus section than in the release print. Oh, well; it’s all part of the legend: Orbison and the Everly’s come off as princes, while Little Richard is a scream articulating to Chuck and Bo why TV dance shows in the ’50s went int screaming “no-no” mode when it came to having black performers actually intermingle with the white kids in the studio.

In addition to the movie just by itself being a Christmas list natural for any serious student of rock (young or old), the extras here make a pretty airtight case for the superiority of Blu-ray over other home transmission systems if you really want a clue of what a scene production is about — and why, speaking as an appreciative Netflix kinda guy myself, streaming will always be for amateurs. 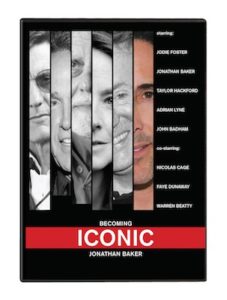