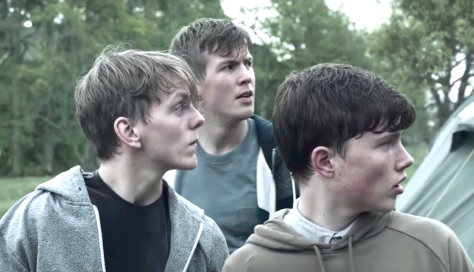 Netflix has released a fall theatrical slate that continues to thumb its nose at the traditional box office window.

The streaming video behemoth is reportedly launching 22 July, a reality drama about the 2011 terrorist attack in Norway that killed 77 people, including mostly school children, on Oct. 10 in about 100 theaters worldwide. The debut coincides with the film’s streaming access globally.

The film, starring Paul Giamatti and Kathryn Hahn, had its world premiere at the Sundance Film Festival earlier this year and will next be seen at the New York Film Festival.

Separately, Netflix is attempting to smooth over its complicated relationship theater with France’s cinematic infrastructure.

Netflix has been at odds with France’s cinema industry regarding the release of Cannes Film Festival selections on streaming concurrent with theatrical. French law mandates minimum four-month box office window – a time frame that can be reduced by one month if a film sells less than 200 tickets (!) in its first month of release.

“We are delighted to announce today three new French series — a witty comedy about friends, family and weed; a psychological horror series; and a modern, coming of age vampire tale in Paris,” Erik Barmack, VP of international originals at Netflix, said in a statement.

Titles include “Family Business,” a half-hour comedy about a young man who recruits his best friends to help save his family’s business, by transforming their butcher shop into France’s first coffee shop.

In “Marianne,” an acerbic young novelist discovers the terrifying characters she writes in her bestselling series of horror novels, might also be living in the real world.

And an untitled series adapted from the book, “Vampires,” by Thierry Jonquet, features a young rebellious teenage girl becoming a vampire as her overly protective mother engages in a race to find a cure.

Documentaries include “Banlieusards,” about Noumouké, 15 years old, the youngest of three brothers from a sensitive suburb of Paris who must choose which of his two brothers’ footsteps he wants to follow.

In “La Grande Classe,” two best friends from a small town decide to return to their hometown for a high school reunion with a secret agenda: take revenge on their former bullies and come to terms with their teenage crush.

To give voice to ordinary heroes – or extraordinary humans — “Solidarite” follows the destinies of five men and women who are symbols of resilience and bearer of hope in humanity.

Initiated through a crowdfunded campaign, “Paris est une Fete” is a real-time French love story filmed over three years on the streets of Paris, without any permits, amidst the crowds in a city scarred by terror attacks and social upheavals.

“Each project involves such talented French storytellers and producers that we are thrilled to be working on what promises to be very exciting times to come,” said Barmack.