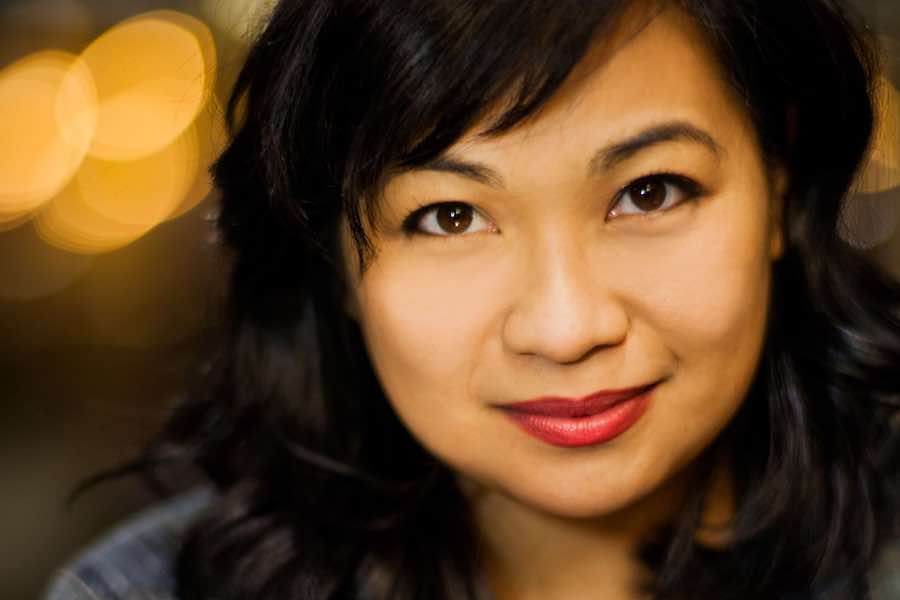 Filmmaker-actress Giovannie Espiritu has worked on both sides of the camera.

Her first short film, Ultra-Feminist, got an Honorable Mention at Outfest: Fusion, and her second film, ALLY 3000, won over 12 awards at film festivals in scriptwriting, social justice and women in film. She is a member of the Alliance of Women Directors and the Producers Guild of America.

As an actress, her television credits include “ER,” “Bones,” “Gilmore Girls,” “Trauma,” “Perfect Harmony” and “Young Sheldon.” She can currently be seen as the lead in the Amazon series “Dyke Central.” She was nominated for Best Supporting Actress at Method Fest for the feature film Fiona’s Script. Other feature film work includes supporting roles in the thriller D-Railed with Lance Henriksen and Middleton Christmas with Eileen Davidson and Michael Pare.

Recently, she was recognized as one of 23 “Most Influential Filipina Women in the World” in the Innovator & Thought Leader category by the Filipina Women’s Network and given a “Special Thanks” credit at the end of Pixar’s Turning Red for being the on-call acting coach for Rosalie Chiang.

Espiritu can now be seen on Fox Entertainment’s free ad-supported streaming service Tubi in the the service’s original film Titanic 666, which started streaming April 15. She plays Nancy, an overzealous fan to Mia, a social media influencer played by Annalynne McCord.

In Titanic 666, 110 years after its namesake’s deadly journey, the Titanic III is fated to repeat one of history’s greatest disasters. A faithful replica of the original, the mammoth cruise ship is safeguarded with the most advanced technology to assure clear passage on its maiden voyage for the famous influencers, historical enthusiasts and other excited travelers on board. But unbeknownst to all, there is a stowaway amongst them with vengeful intentions to channel dark forces still at sea. As the ship halts over the surface of the original gravesite, crew and passengers are terrorized by ghosts.

We asked Espiritu about her experience starring in the Tubi original.

MPN: How did you first get involved in and what attracted you to the project?

Espiritu: I auditioned for Titanic 666, back when it was still called Dead Water. As a working (not name) actor, I generally audition for everything and anything my team sends me. Sometimes you don’t know exactly what project is until you book it.

MPN: You’ve done lots of work for traditional television outlets and studios. What was different/similar about participating in a project that would appear on a free streaming service such as Tubi? Had you watched the service before?

Espiritu: I actually didn’t know about Tubi until working on this. It’s great that there are so many outlets now for filmmakers and storytellers to showcase their work. I feel like, with the advent of streaming networks, more diverse stories and points of view can be told. We need more of that in the world today. I think that acting and storytelling can help the world become a more empathetic place.

MPN: Can you describe your on-set experience? Are there any fun stories?

Espiritu: I loved working on this. First of all, the location in Long Beach was beautiful. The Queen Mary is such a majestic ship and imbued with so much history, I felt like it was like a fairytale in a way … well, a haunted fairy tale, because it is haunted in real life. I had an orb show up in my behind-the-scenes pictures and I ended up getting freaked out, so I asked production if I could stay in my car or hang out with the background talent instead of being alone in my room.

MPN: Can you describe the character you play? What did you identify with most about your character?

Espiritu: With Nancy, I have an affinity for the loner, losers and outcasts, because I definitely feel like one a lot in my life. Her breakdown was: “She has no life or friends and is a super fan of the influencers.” It was easy for me to do because I tend to put people on a pedestal in my real life and I’m an introvert by nature.

MPN: What was your favorite scene?

Espiritu: I loved running around like a crazy person in the ballroom when the ship crashes into the iceberg, but my favorite scene to film was when Mia (Annalynne McCord), Jackson (Derek Yates) and I find Idina (Lydia Hearst) doing her seance because we actually got to go down into the boiler room.

MPN: How would you describe Titanic 666 to viewers? What kind of fans will like it?

Espiritu: If you love campy movies like Sharknado, I think you’ll enjoy it. It is a silly, fun, titillating ride. It knows what kind of movie it wants to be.

MPN: In addition to being a performer, you are also active politically. How does your political activism inform and affect your career choices?

Espiritu: My identity is already political. I used to be an undocumented dreamer born to a teenage mom. I spent time in a Biblical Doomsday cult as a teen. I became a young mom myself and had to learn how to navigate the world as a single parent trying to make ends meet on gig work. Most of my storytelling comes from that worldview where I try to heal generational trauma, and dismantle the patriarchy mainly because I’m trying to figure out and heal myself through art.

MPN: What’s next for you?

Espiritu: I’m traveling to Indonesia this week to do some scouting and research for a feature film that I’ve been commissioned to write. Hopefully, I’ll direct it. I also have a few shorts in development and I’ve been kicking around the idea of doing a personal documentary since my upbringing is so unusual. And I’ll be performing in a benefit production of The Vagina Monologues at the Herbst Theater in San Francisco at the end of May. V, formerly known as Eve Ensler, who wrote the play, will also be there, so I’m super excited. I admire her so much. Her work has sparked movements of education for women globally.