Sometimes it helps to be an industry disruptor, other times brand awareness carries the day.

Both apply to Netflix, Amazon Prime Video and Hulu, which rank as the top three subscription streaming video services when it comes to length of the typical subscription. New data from Parks Research found SVOD pioneer Netflix rates No. 1 with the average subscriber duration lasting about 48 months. That compared with 40 months for Prime Video and 30 months for Hulu.

The Dallas-based research firm found that 61% of OTT subscribers never join a service on impulse, and 50% never subscribe with plans to cancel shortly thereafter. With services like Netflix and Disney+ dropping free trials, subscribers look for SVOD plans for a long-term investment, according to Parks. For SVODs, this means content must be appealing enough to generate and sustain that interest. Indeed, about 30% of subs often join a service to watch a specific program. As a result, the search for desirable content holds the greatest importance, according to Parks. 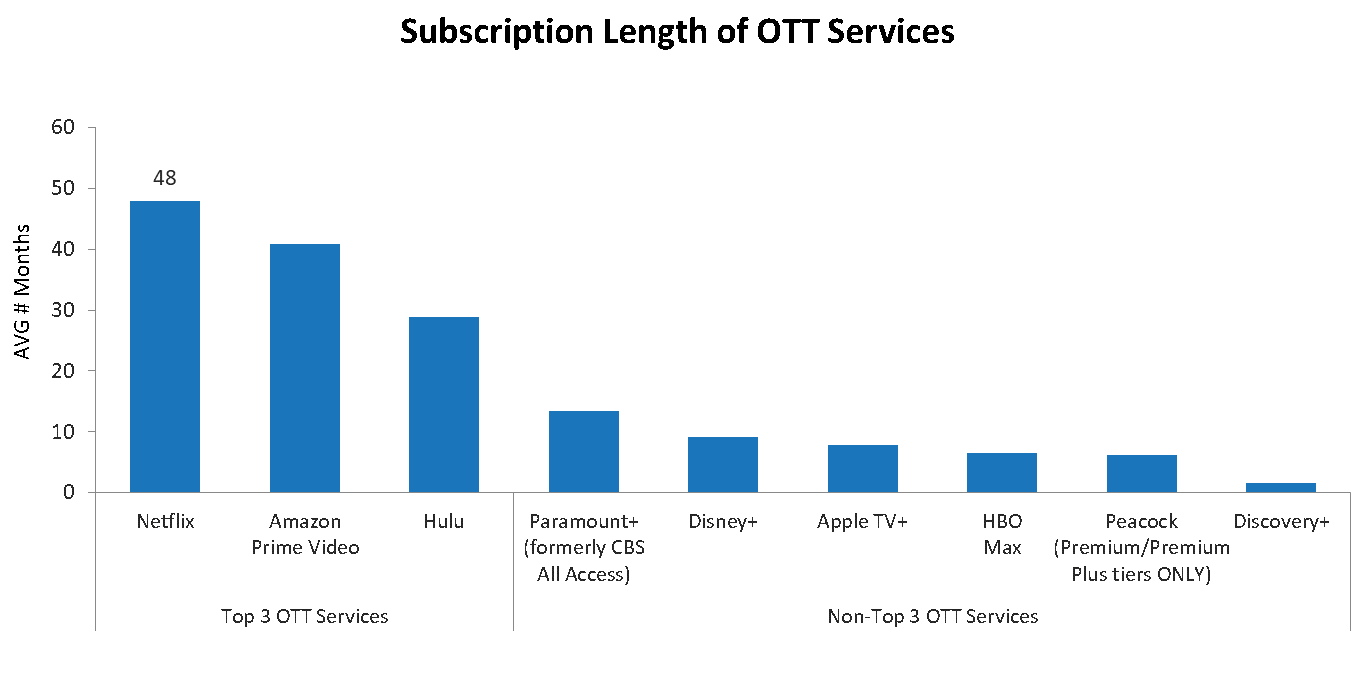 Not only does desirable content and personalities prompt retention, but viewers are unlikely to churn from a service that they have a strong brand affinity for.

So when WarnerMedia launched HBO Max last year, the initial goal was to broaden the lineup of traditional edgy HBO shows with other marquee IP, including DC Entertainment and Max originals. The strategy mindset being that targeting a wide variety of interest groups would unify niche audiences under one streaming service.

Paramount+ has emulated this strategy, featuring its key properties and personalities heavily within the marketing that promises a “mountain of entertainment.” Disney, Pixar, Marvel, Lucasfilm, and National Geographic feature prominently on Disney+ as their streaming home, allowing the upstart SVOD to rapidly gain subscribers globally and become a contender to Netflix & Co.

Parks researcher Liam Gaughan found that upstart SVOD services being bundled together with competing and non-competing services have been successful at generating subscribers. In addition to the “Disney Bundle,” offering new subs access to Disney+, ESPN+ and Hulu for $13.99 monthly with ads ($19.99 without), Gaughan cited a previous bundling deal offering Apple TV+, CBS All-Access, and Showtime for $9.99. He said that content from Showtime and All Access enabled Apple users to try alternative programming and helped extend subscriptions.

“This was also a strategic move from ViacomCBS, who was able to introduce All-Access content to Apple users prior to the launch of the rebranded Paramount+,” Gaughan wrote in a blog post.