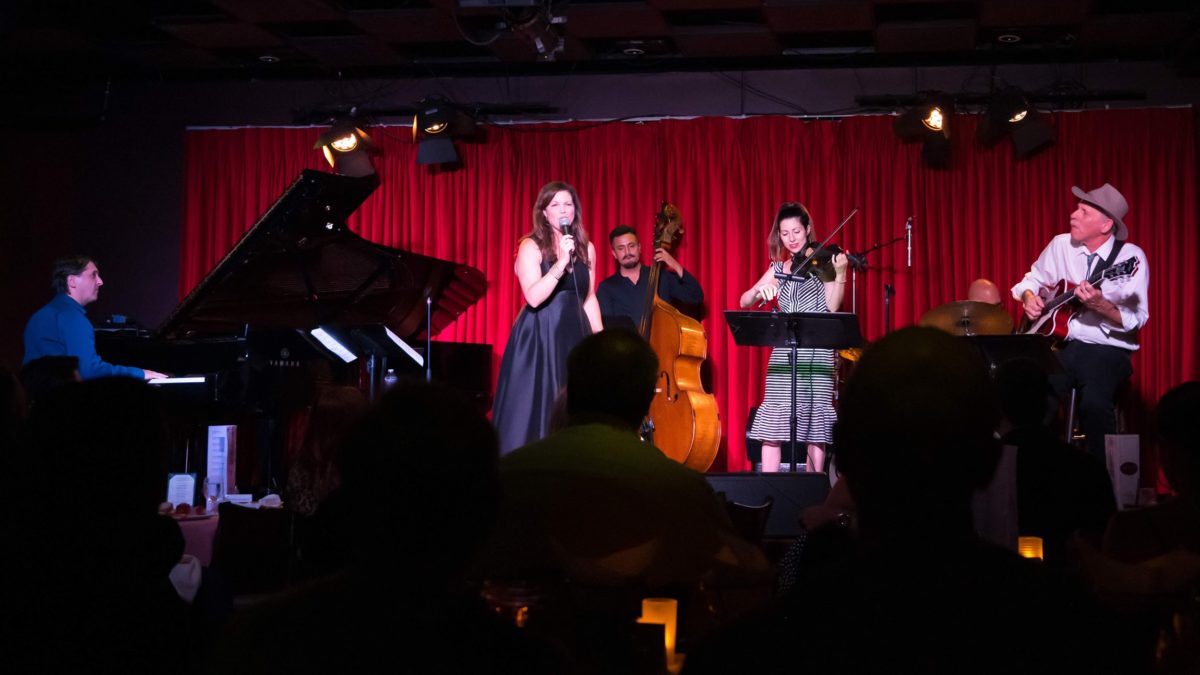 Staci Griesbach is walking the line between country and jazz.

Over the past two months, the publicist-turned-vocalist has headlined shows at top jazz clubs in Los Angeles and Nashville, released an album of Patsy Cline classics, performed at the Country Music Hall of Fame and saw Rolling Stone magazine call her first single “gorgeous.”

A year ago at this time, Griesbach returned from a birthday trip to Greece only to find herself downsized out of a job, after nearly 15 years as a publicity executive at Sony Pictures Home Entertainment.

And instead of immediately trying to land another job, Griesbach decided to put her corporate career on hold for a while and pursue a long-held dream of becoming a professional singer.

A long shot? Not for Griesbach, the Wisconsin farm girl who made her way to Hollywood and rose to VP of Publicity for the home entertainment division of one of the five major studios.

On Aug. 23, Griesbach released her first album, My Patsy Cline Songbook. Financed partially by a Kickstarter campaign and nearly a year in the making, the album finds Griesbach reimagining a hit parade of songs made famous by the pioneering female country singer in in a style similar to jazz standards from the Great American Songbook.

Rolling Stone included one of her tracks on its “10 Best Country and Americana Songs to Hear Now,” right above a new tune from veteran country chart-topper Miranda Lambert. The publication hailed her “gorgeous jazz interpretation of Patsy Cline’s ‘Walkin’ After Midnight’.”

She appeared in the Country Music Hall of Fame’s “Musician’s Spotlight” celebration of Cline’s birthday, performing with legendary composer, arranger and session pianist Bill Pursell, who played with Cline on her recording sessions in Nashville, as well as Roger Spencer, of the acclaimed Nashville Jazz Workshop.

And her album has gotten the thumb’s up from none other than Cline’s daughter, Julie Fudge, who in the CD’s liner notes says, “It is amazing to hear Staci interpreting Mom’s music for the jazz fan, as well as the traditional Patsy fan.  These arrangements are new and fresh and so engaging.  I truly think Mom would have listened to this collection.”

“My hope with this debut album is to potentially introduce audiences of country music to jazz, and vice versa, showcasing that there is arguably more than one Great American Songbook to explore with a cross-pollination of jazz and country music,” Griesbach said.

Griesbach’s My Patsy Cline Songbook includes fresh interpretations of Patsy Cline classics such “Walkin’ After Midnight,” arranged by Jeremy Siskind and featuring Bob Sheppard on saxophone; “Leavin’ On Your Mind,arranged by Tamir Hendelman; and “I Fall to Pieces,” featuring Portuguese lyrics and a bossa nova groove to Cline’s first No. 1 hit from 1961.

Produced by Griesbach herself, the songs on her debut album were written by some of Nashville’s most celebrated songwriters, including Hank Cochran, Harlan Howard, Bill Monroe, and Willie Nelson.  Tierney Sutton, an eight-time Grammy-nominated jazz vocalist, produced Griesbach’s vocals during the recording process.

Out this week: a music video of “Walkin’ After Midnight,” directed by Delaney Moghanian and Trevor Marcotte, who also handled cinematography and editing.

“These songs are timeless and prove that a good melody and a good lyric can cross genres, generations, and connect no matter the style of interpretation,” said Griesbach.  “I wanted to find ‘standards’ that were already in my bones, where I could interpret them authentically, and for that, I turned to the music I had been listening to throughout my childhood.”

That childhood was spent on a working farm in rural Northeast Wisconsin.  “My childhood days were spent feeding and caring for the cattle, baling hay, or picking stones in the fields before planting,” Griesbach recalled.

“The Patsy Cline songs were something I grew up to,” she said. “My parents had the ‘Patsy’s Greatest Hits’ cassette tape, and along Ernest Tubb, George Jones and others, these were the tapes we’d listen to while we were driving around doing chores or on a long road trip.”

At the University of Wisconsin-Madison, Griesbach was a member of the Wisconsin Singers, a touring troupe that performs Broadway and pop standards and entertains more than 50,000 fans each year.

“After graduating college, I had a major decision to make,” Griesbach said. “Would I choose a job at a major, reputable PR firm or accept an offer to perform on a cruise ship and travel around the world?”

With practical matters like paying off my college loans hanging over her, Griesbach said, she made the practical decision and jumped into PR. She interned with the Wisconsin Milk Board and Fleishman-Hillard in Kansas City. The big agency moved her to Sacramento, and two years later she moved to Los Angeles to be closer to the entertainment scene. In 2005, Griesbach was hired at Sony Pictures Home Entertainment, where over a 14-year run she rose from Manager to Vice President, managing global campaigns and promoting the studio’s film and television content around the world.

In 2017, she recalls, “I sang and produced 100 songs for a centennial tribute to Ella Fitzgerald — complete with a sell-out show at an L.A. club benefiting the Ella Fitzgerald Foundation.”

After her position at Sony was eliminated, Griesbach said, she decided to make music her full-time pursuit. Through Weir, she said, she was introduced to Tamir Hendelman, “and we went to work on arranging another six songs from November to January, 2019.

“It’s such an interesting time in music right now,” she said. “We’re seeing genres blending and the lines that used to be so structured are now blurring quite a bit in terms of how we define musical genres.”

The recording was finished in the spring, with several other prominent session players coming on board, including Nashville’s Stuart Duncan on fiddle. The album was mastered at The Bakery Mastering – located, ironically, on the Sony Pictures lot.

“For nearly 20 years, I let myself believe that I couldn’t go after my dreams,” Griesbach said. “I took the ‘safe’ route, sitting at a corporate desk. But eventually I realized our job in life is to be vulnerable.  And for me, what that means is letting my heart shine and do what makes me sing – literally!”

Griesbach is by no means ruling out a return to the corporate world, given the realities of the music business, but first, she’s giving it all she’s got.

“I’m going after this with everything, but I’m realistic about the challenges and practicalities of being a brand-new artist who is just starting out and building a fan base,” Griesbach said.  “Maybe there’s a place where my passion for singing and performing meets the skills I’ve honed over the past 20 years of corporate life.  Maybe it’s not all one or the other.  Maybe I can find a way to do what I love and get paid doing it.  That’s what I’m really trying to figure out.”