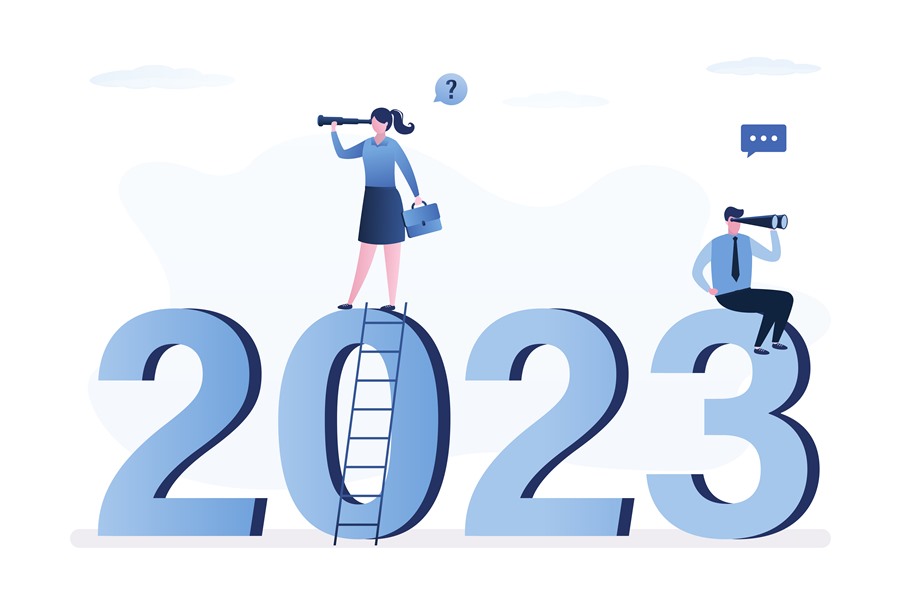 NEWS ANALYSIS — The dawning of a new year brings to the home entertainment sector, both streaming and transactional, a host of challenges and questions — and a few opportunities.

Challenges include a nation that once again is on the threshold of a recession, prompting a rash of recent layoffs and cutbacks at most of the big studios as well as streamers. Compounding the cloudy economic outlook is the fact that Hollywood is in the midst of serious self-examination, at the center of which is the question of streaming’s sustainability as a business model, given the escalating cost of content and limited returns under cheap all-you-can-watch subscription plans.

Questions include: How will recent moves into even lower-priced advertising-supported subscription plans play out for Netflix and Disney+?  What will the merger of HBO Max and Discovery+ look like, particularly given the late-2022 bloodletting of content from Max? Will there be more consolidation among the big streaming services? And what of the shrinking transactional market, in which consumers rent or buy specific movies, TV shows and other content either digitally or on DVD or Blu-ray Disc?

And yet there are still opportunities. In conversations with industry leaders, the word we hear most is synergies, since except for Netflix the leading streamers are all part of big media companies that also include theatrical and traditional, transactional home entertainment businesses.

The theatrical business, which has traditionally been the launching pad for movies, has been torn apart by streamers buying and even producing their own content — and studios owned by media companies giving their streaming sisters preferential treatment.

Gower Street Analytics projects the 2023 worldwide box office will improve to a projected $29 billion in ticket sales from an estimated 2022 total of $25.8 billion, but that’s still a good 30% below pre-pandemic 2019 box office revenue of $42.3 billion. Part of the reason is fewer movies being released to theaters, which then also hurts transactional home entertainment, which used to be the critical “second window” studios looked for to prop up theatrical underperformers while boosting the overall bottom line.

And yet Bob Buchi, president of worldwide home media for Paramount Pictures, is optimistic for the transactional side of the business heading into 2023, citing a rash of high-profile theatrical releases slated for next year and maintaining quality is more important than quantity.

“In 2023 the theatrical slate across the industry promises to be even more robust and consistent than it was in 2022, and we at Paramount are especially enthusiastic about the sales and drafting opportunities we’ll have with the return of key franchises like ‘Mission: Impossible,’ ‘Transformers,’ ‘Scream,’ ‘Teenage Mutant Ninja Turtles’ and ‘Paw Patrol,’” Buchi says.

“Home entertainment remains very important to collectors and cinephiles who appreciate the best-possible quality audio and video presentation and the compelling bonus features, while general audiences appreciate the broad selection and flexibility to access their favorite films whenever they want.”

“The market will likely remain very fragmented with different release strategies across the studios,” he says. “But Universal is very optimistic, given our strategy, and is excited about the opportunity in 2023 to drive further growth across the category with our exceptionally diverse slate, including Fast X, The Super Mario Bros. Movie and Oppenheimer.”

Adam Frank, SVP of global digital sales and distribution at Lionsgate, also takes pride in his studio’s slate of theatrical releases, the success of which he expects to trickle down to traditional home entertainment.

“We have a robust slate in 2023 that includes John Wick: Chapter 4; The Hunger Games: The Ballad of Songbirds and Snakes; Expendables 4; Judy Blume’s timeless Are You There God? It’s Me Margaret; The Blackening; a new installment in the billion-dollar ‘Saw’ franchise; and a new Dirty Dancing sequel starring and produced by Jennifer Grey, among many others,” he says. “With this lineup, we expect to see continued acceleration in the transactional space.”

Transactional and subscription video-on-demand (SVOD) should not be seen as mutually exclusive, particularly if smart windowing leads to synergies between the two entertainment consumption models, says Jason Spivak, EVP of distribution for North America television and home entertainment at Sony Pictures Entertainment.

Indeed, Sony, which has no proprietary standalone streaming service, in 2021 signed separate distribution deals with Netflix and Disney+ worth a reported combined $3 billion for exclusive Pay 1 TV (streaming) access to its theatrical releases through 2026. Those movies used to go to Starz, HBO, Epix, FX and Showtime. Netflix paid big for the first rights, with Disney+ getting access after Netflix’s 12- to 18-month window.

Sony’s Spivak says transactional and streaming can happily co-exist and service consumers in different ways at different moments. Transactional affords consumers the benefits of movie collection building while streaming appeals to consumers when they may be more casual in their movie consumption interests.

“As such, we do not look at it as an either-or type of choice for our audiences,” he says.

On the TV series side, Spivak says, “We have seen streaming become a primary platform for audiences to enjoy our new and classic shows, offering convenience for consumers to discover and binge.

“With that said, for certain shows transactional remains [the best] way to access and collect the latest seasons and episodes, as evidenced by the performance of ‘Better Call Saul,’ which is our best-performing season ever in terms of digital sellthrough in the first six months of release.”

Paramount’s Bob Buchi agrees. “The industry will continue to experiment market by market with windowing, pricing and release strategies,” he says. “At Paramount, we are working more collaboratively than ever with our colleagues in theatrical and at Paramount+ to leverage our joint consumer messaging and maximize our marketing spend in the most effective way possible.”

In 2022, he says, “We launched Orphan: First Kill simultaneously in a limited theatrical run, on PVOD/PEST, and on Paramount+, allowing consumers to decide their viewing preference. We found that the combined messaging and collective effort caused all boats to rise and the film was successful across all platforms.

“That strategy is contrasted with Top Gun: Maverick, which obviously had one of the most unprecedented theatrical runs in recent history. After generating nearly $1.5 billion at the global box office, the film became a massive success across home entertainment platforms and the No. 1 best-selling digital release of all time, all based on a more traditional windowing pattern.

“Every film requires careful consideration to determine the best release strategy to serve the consumer and maximize revenue across all platforms.”

Partnering with retailers also is key, Buchi says. “I admire how our leading retailers continue to strive for innovation, new growth opportunities, efficiencies, and paradigm shifts, all of which can lead to exciting developments we’ll see tested in 2023 and beyond,” he says. “We plan to explore a reimagining of headless commerce (a separation of the front end and back end of an e-commerce application) for both physical and digital retailers, the evolution of NFT-bundling with premium products and experience for the super fan, and podcast product extensions for our beloved franchises.”

“There will continue to be multiple modes of entertainment consumption in 2023,” says Cameron Douglas, VP of home entertainment for Vudu and Fandango. “However, we expect that consumers will be more value-conscious. Do we still need this subscription service, or should I upgrade/downgrade/eliminate? Can we tolerate a few ads in this casual viewing experience? Should we buy this, or should we just rent it? Should we splurge on a family night out at the movie theater or wait and watch the film at home in the premium window? Tools like Rotten Tomatoes will become even more valuable, not only to validate fans’ entertainment choices, but to help people find value in what to watch next.”

Garson Foos, CEO of Shout! Factory, a leading independent film distributor, says 2023 “looks to continue Shout’s growth in the transactional space with theatrical new releases, major new anime features and name-brand catalog coming to market. We’re extremely happy that the transactional business has remained so strong. We continue to make numerous deals for physical and TVOD rights — physical with studios and indies, and TVOD with indies. The 4K format is creating a lot of opportunity as we continue to find new ways to engage passionate fans. As there are more strong titles available to stream, it puts pressure on the transactional business. But there’s always the customer that will pay to have the best version of something, and to stream it without commercials, or own it digitally.”

The subscription streaming side of the business, which according to the latest estimates from DEG: The Digital Entertainment Group now accounts for nearly 85% of consumer home entertainment, is expected to see continued turbulence in 2023, thanks to such obstacles as high content prices, fierce competition among services, a maturing market and, until just recently, a reliance solely on consumer subscriptions for revenue.

“SVOD will continue its challenges as consumers cancel subscriptions or move to lower-cost ad-supported tiers, which may exacerbate the hemorrhaging of cash,” says Bill Rouhana, CEO of Chicken Soup for the Soul Entertainment. “You’ll see a consolidation of the industry as smaller SVOD players fade, and even larger players begin looking to be sold or merged.”

Veteran ad-supported streaming services such as Chicken Soup, Rouhana maintains, are in the right place at the right time.

“AVOD is soaring because consumers are growing tired of paying for so many SVODs,” he says. “Given the state of the economy and uncertain times, they are cutting back. To supplement their streaming diet, they’re seeking free options, and AVOD services are benefiting from this. I think you’ll see even greater growth in 2023.”

As for his own company, Rouhana says Chicken Soup for the Soul Entertainment “will continue to scale across AVOD, FAST and our Screen Media original content studio. It will be a big year for AVOD and FAST as consumers continue to discover the amazing content available for free — especially as the economy continues in a recession.

“I also see more companies getting into AVOD — which further reinforces our strategy and what we already know. As Netflix and Disney ramp up their ad-supported tiers, they will begin charging higher CPMs which will benefit us. That will also help our ad rep business as we help smaller AVODs sell their ad inventory — something they can’t do on their own at the same level of success.”

“For Xumo, we will continue to scale and deliver premium experiences across our FAST platform, Xumo Play, and the roll out of new Xumo devices,” he says. “The industry as a whole will continue to innovate around engagement, programming and more personalized experiences.

“I believe entertainment is supposed to be easy.  With the amount of amazing choices across SVOD services, the fatigue is not in streaming, it’s in choosing and cost. AVOD and FAST continues to soar because it takes the economic risk out of just watching something, without having to think about where and what you are choosing to watch.”

Amy Jo Smith, president and CEO of trade association DEG: The Digital Entertainment Group, says that in the coming year, “it will be more apparent than ever how much consumers value choice and a seamless user experience. Viewers will continue to seek a wider breadth of content, including sports and live events, delivered through major and specialty services, and they will look for cost-efficient, customized, and easily navigable bundles of entertainment options, including experiences that are transactional, subscription, ad-supported and possibly even theatrical, social and immersive.”

“Short lived will be the days where consumer entertainment is primarily developed and distributed by a community of monolithic giants centered in Hollywood run and operated by people who look like me,” adds Mark Fisher, president and CEO of OTT.X, the streaming trade association. “We will continue to move forward toward a more egalitarian, global and diverse ecosystem.”