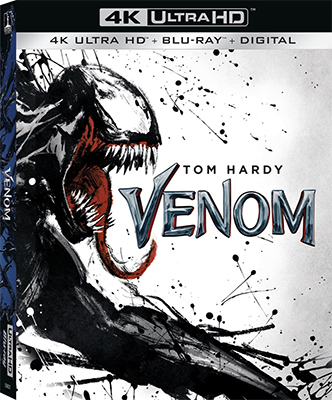 Tom Hardy brings the fan-favorite antihero Venom to life in this entertaining throwback to the wild sensibilities of the comic book movies of the late 1990s and early 2000s. The Blu-ray is loaded with bonus materials that should satisfy fans of both the character’s history and his film adaptation.

The character of Venom’s journey to the big screen shares a lot of parallels with Deadpool, in that both were introduced as a villain in another character’s poorly received movie before getting a second chance after years of development hell to get a movie of their own.

Venom was originally introduced in the 1980s as an alien entity that served as an antagonist for Spider-Man before his increasing popularity led writers to shift him into the role of an anti-hero (often dubbed the “lethal protector”). He’s essentially a living black goo known as a symbiote, which merges with a human host to create a hulking beast with super abilities and a voracious appetite.

The character’s big-screen debut came in 2007 via a much-maligned appearance in the awful Spider-Man 3, when he was shoehorned into the story allegedly at the behest of studio executives looking to make a spinoff. (Likewise, Deadpool first appeared in 2009’s X-Men Origins: Wolverine, in which all of his fan-favorite traits were removed — a blunder subsequently lampooned in the mega-successful “Deadpool” solo movies that were only made after the popularity of leaked test footage pressured a reluctant Fox into greenlighting the project.)

Then Sony made a deal with Marvel Studios to include Spider-Man in the Marvel Cinematic Universe, and when that proved successful Sony felt confident in moving forward with Spider-Man-related side projects, including Venom and the animated Into the Spider-Verse.

But, with the live-action Spider-Man on loan to Marvel’s creative team, Sony had to develop Venom without using Spider-Man in his origin story, as the two characters are intricately connected in the comic books. Originally, the symbiote bonded with Peter Parker before moving on to a better-suited host, Peter’s journalistic rival Eddie Brock, to finally become Venom. This paved the way for the expansion of the symbiote concept and the introduction of characters such as Carnage and Riot who could serve as villains for Venom.

So, in the Venom movie, the symbiotes are discovered on a comet and brought to Earth by a space mission funded by megalomaniacal rich guy Carlton Drake (Riz Ahmed). But the ship crashes and some of the symbiotes get loose before Drake’s cronies can round up the rest for experimentation.

Drake realizes they need human hosts to survive on Earth, so he kidnaps homeless people to test out his theories. This arouses the suspicions of Web reporter Eddie Brock (Tom Hardy), whose attempts to investigate Drake’s lab cause him to come into contact with the Venom symbiote, which takes over his body.

The symbiote is able to communicate telepathically with its host, and we learn that symbiotes need to have a good match with their hosts for the pairing to work, and apparently Eddie is well matched for Venom.

Of course, with Venom/Eddie on the loose, Drake sends out a private army to kill him, leading to several action sequences around the streets of San Francisco. Drake wants to send another rocket to the comet to bring back more symbiotes, a plan that Eddie/Venom vows to stop, even if it means fighting other symbiotes who support Drake’s mission. (This being a comic book movie, a finale featuring the main character battling the evil version of himself is almost a foregone conclusion.)

The best aspect of the movie is the interaction Hardy has with, well, himself — the interplay between Brock and the Venom voice in his head that wants him to find food and that he has to convince to stop eating people.

Part action, part horror, part buddy comedy, the film shifts tone at will in its efforts to stay faithful to the character while maintaining the commercial appeal of a ‘PG-13’ movie. It feels a lot like a throwback to a 1990s or early 2000s comic book movie that would try anything to entertain its audience. The visual effects are appropriately over the top, awash in CGI flair as gooey symbiotes launch tendrils and ooze across the room in attacking whomever is nearby.

The Blu-ray comes with a “Venom Mode” that offers pop-up trivia about the character and production while the movie plays. The information is low-key and unobtrusive, but often relates facts that might not be as interesting as answering questions that might pop into a viewer’s head during a given scene.

Three deleted scenes offer some more insights about the Venom character — one features Eddie talking to himself in a cab, another shows Venom’s hilarious response to an annoying car alarm, and the third is an extended version of a post-credits scene that teases a potential villain for the sequel.

Also included are about an hour of behind-the-scenes featurettes, highlighted by the 20-minute “From Symbiote to Screen,” a good primer on the history of the Venom character. The three-minute “Symbiote Secrets” unveils some of the hidden references in the film.

In addition, there’s a gallery of visual-effects progressions from storyboard to finished film.

The disc also offers a bonus scene from the recently released Spider-Man: Into the Universe, both tacked on to the end of the movie and included separately. This is in addition to the Spider-Verse trailer that plays when the disc loads.

Finally, the disc includes two music videos: one for Eminem’s Venom title track, and another for an Into the Spider-Verse song, “Sunflower” by Post Malone and Swae Lee.