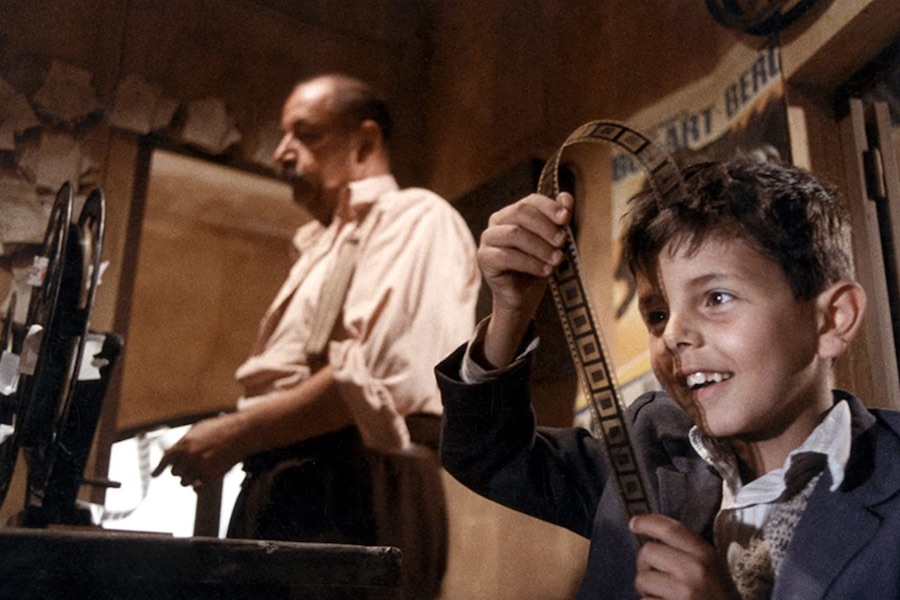 Cinema Paradiso, Tremors, Versus and the Shohei Imamura three-film collection Survivor Ballads are available this month on disc from MVD and Arrow Films. 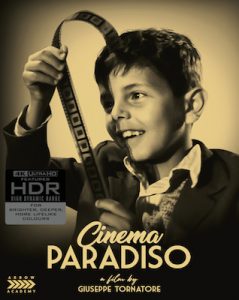 A winner of awards across the world including the Best Foreign Language Film Oscar, five BAFTA Awards, the Grand Prize of the Jury at the Cannes Film Festival and many more, Cinema Paradiso (1988) — available on 4K Ultra HD Blu-ray, Blu-ray and DVD — is Giuseppe Tornatore’s loving homage to the cinema. It tells the story of Salvatore, a successful film director, returning home for the funeral of Alfredo, his old friend who was the projectionist at the local cinema throughout his childhood. Soon memories of his first love affair with the beautiful Elena and all the highs and lows that shaped his life come flooding back, as Salvatore reconnects with the community he left 30 years earlier. The original award-winning theatrical version of Tornatore’s classic is presented here for the first time on 4K Ultra-HD Blu-ray with DolbyVision. This edition also includes the expanded director’s cut on Blu-ray, which delves deeper into Salvatore’s backstory. Special features include audio commentary with Tornatore and Italian cinema expert critic Millicent Marcus; “A Dream of Sicily,” a 52-minute documentary profile of Tornatore with interviews with the director and extracts from his early home movies and interviews with director Francesco Rosi and painter Peppino Ducato, set to music by Ennio Morricone; “A Bear and a Mouse in Paradise,” a 27-minute documentary on the making of Cinema Paradiso and the characters of Toto and Alfredo, featuring interviews with the actors who play them, Philippe Noiret and Salvatore Cascio, as well as Tornatore; “The Kissing Sequence,” in which Tornatore discusses the origins of the kissing scenes with clips identifying each scene; and the original director’s cut theatrical trailer and 25th anniversary re-release trailer. 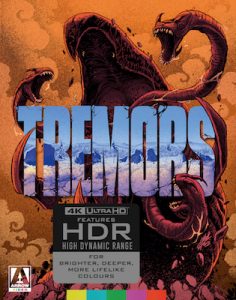 A 1950s-style humorous creature feature, Tremors (1990), available on 4K Ultra HD Blu-ray and Blu-ray, is a cult classic that has spawned a successful franchise that continues to this day. In the film, good-ol’-boy handymen Val (Kevin Bacon) and Earl (Fred Ward) are sick of their dead-end jobs in one-horse desert town Perfection, Nev. (population: 14). Just as they’re about to escape Perfection forever, however, things start to get really weird: half-eaten corpses litter the road out of town; the phone lines stop working; and a plucky young scientist shows evidence of unusually strong seismic activity in the area. Something is coming for the citizens of Perfection and it’s underground. The release features a new 4K restoration from the original negative by Arrow Films, approved by director Ron Underwood and director of photography Alexander Gruszynski. Included in the release are a 60-page book featuring new writing by Kim Newman and Jonathan Melville and selected archive materials; a large fold-out double-sided poster featuring original and newly commissioned artwork by Matt Frank; a small fold-out double-sided poster featuring new Graboid X-ray art by Frank; six double-sided, postcard-sized lobby card reproductions; and limited edition packaging with a reversible sleeve featuring original and newly commissioned artwork by Frank. Special features include new audio commentary by director Ron Underwood and writers/producers Brent Maddock and S.S. Wilson; new audio commentary by Jonathan Melville, author of Seeking Perfection: The Unofficial Guide to Tremors; “Making Perfection,” a new documentary by Universal Studios interviewing key cast and crew from the franchise (including Bacon, Gross, Ariana Richards and Underwood, among many others) and revisiting the original locations; “The Truth About Tremors,” a newly filmed interview with co-producer Nancy Roberts on the film’s rocky road to the screen; “Bad Vibrations,” a newly filmed interview with director of photography Alexander Gruszynski; “Aftershocks and Other Rumblings,” newly filmed on-set stories from associate producer Ellen Collett; “Digging in the Dirt,” a new featurette interviewing the crews behind the film’s extensive visual effects; “Music for Graboids,” a new featurette on the film’s music with composers Ernest Troost and Robert Folk; “Pardon My French!,” a newly assembled compilation of overdubs from the edited-for television version; and numerous archive and other extras. 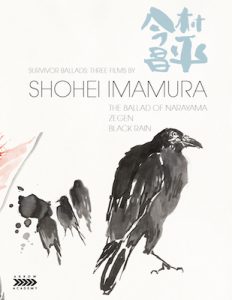 Survivor Ballads is an exclusive Blu-ray box set from Arrow Academy that presents restored versions of three late career classics from legendary filmmaker Shohei Imamura, a leading figure of the Japanese New Wave era of the 1960s. Based on an ancient folktale, The Ballad of Narayama (1983) was the first of two works from the director to win the prestigious Cannes Palme d’Or. Imamura’s magnum opus depicts the members of an extended farming family eking out their existence in the mountains north of Japan against the backdrop of the changing seasons before village lore decrees they make the sacrifice of abandoning their aged mother on the top of a nearby mountain when she reaches her 70th year. Making its HD debut, Zegen (1987) takes a satirical look at Japan’s prewar colonial expansion through the unscrupulous eyes of its flesh-peddler antihero as he establishes a prostitution enterprise across Southeast Asia. Finally, the harrowing Black Rain (1989) details the precarious existence of a household of atomic bomb survivors as, five years after being caught in the blast of Hiroshima, they struggle to find a husband for their 25-year-old niece. The three works epitomize the director’s almost documentary style of filmmaking, exposing the vulgar yet vibrant and instinctive underbelly of Japanese society through a sympathetic focus on peasants, prostitutes, criminal lowlife and other marginalized figures to explore the schism between the country’s timeless premodern traditions and the modern face it projects to the world. Special features include new audio commentaries on all three films by Japanese cinema expert Jasper Sharp; new, in-depth appreciations of all three films by Japanese cinema expert Tony Rayns; an alternate color ending to Black Rain, shot by Imamura but removed from the film shortly before its release; archival interviews on Black Rain with actress Yoshiko Tanaka and assistant director Takashi Miike; multiple trailers and image galleries; original Japanese press kits for The Ballad of Narayama and Black Rain (BD-ROM content); a limited edition, 60-page booklet containing new writing by Tom Mes; and limited edition packaging featuring original and newly commissioned artwork by Tony Stella. 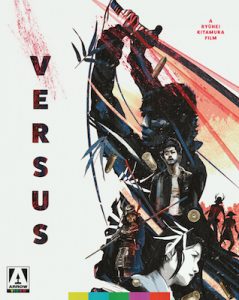 Versus (2000), available on Blu-ray, is chock-full of fight scenes, gangster shootouts, sword-slashing violence and gory zombie horror. In the film, a mysterious face-off in a wooded clearing between two escaped convicts and a carload of sharply dressed yakuza holding a beautiful woman captive ends in hails of bullets and showers of blood. The location for this violent encounter is the mythic Forest of Resurrection, the site of the 444th portal of the 666 hidden gates that link this earthly domain to the netherworld. As one of the surviving prisoners escapes with the girl into the darkness of the forest, disgruntled gangsters soon become the least of their worries as an earlier battle between a lone warrior against hordes of zombie samurai is carried over from a millennium ago into the present day. The film launched the careers of director Ryûhei Kitamura (Godzilla Final Wars, Midnight Meat Train) and action star and fight choreographer Tak Sakaguchi (Battlefield Baseball, Yakuza Weapon). Arrow Video is presenting the title in both its original 2000 and expanded 2004 Ultimate Versus iterations, in a new, director-approved restoration. Numerous extras include a reversible sleeve featuring original and newly commissioned artwork by Chris Malbon; audio commentary by Kitamura and producer Keishiro Shin; and audio commentary by Kitamura and the cast and crew.