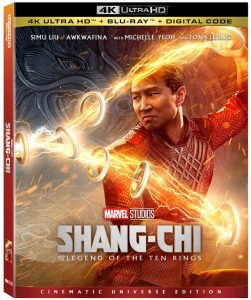 Disney/Marvel’s superhero actioner Shang-Chi and the Legend of the Ten Rings is projected to win its fourth consecutive North American weekend box office Sept. 26 with $13.3 million, bringing its domestic tally to $196.5 million — tops among all movies in 2021.

The latter tally is not sitting well with Black Widow star Scarlett Johansson, who filed a breach of contract lawsuit against Disney, alleging the movie’s Premier Access release strategy deprived her of contractual compensation from the theatrical release.

The Disney/Marvel Cinematic Universe release Shang-Chi and the Legend of the Ten Rings has surpassed Marvel Studios’ Black Widow as the top-grossing domestic movie with three months left in the 2021 box office.

Both titles, along with other major Hollywood releases, have not yet been released in China, the world’s No. 2 box office market. While no official reason has been given, reports suggest that with the 100th anniversary of the ruling Communist Party occurring this summer, the Chinese government is reluctant to showcase Western movies.

Despite Shang-Chi featuring a largely Asian cast, including Liu, the actor emigrated to Canada with his parents at the age of five — a move, media reports suggest, was largely due to his parents’ opposition to communism.

Regardless, the success of the two movies heralds back to Disney’s triumphant pre-pandemic 2019 box office, when it tallied more than $11 billion in global ticket sales — largely on the back of Marvel superhero movies, and the Chinese box office.

The Disney/Marvel Cinematic Universe release Shang-Chi and the Legend of the Ten Rings looks set to win at its fourth consecutive domestic weekend box office appearance — a probable achievement not seen by a Marvel title since Black Panther in 2018.

The final U.S. box office weekend of September — reportedly projected to generate less than $40 million — concludes a quiet month ahead of the Oct. 1 release of Sony Pictures’ first major theatrical bow in the pandemic, Venom: Let There Be Carnage, the sequel to 2018’s Venom, which generated more than $850 million at the global box. Let There Be Carnage again stars Tom Hardy as superhero Venom and his alter ego, Eddie Brock. In the film, Brock tries to reignite his career as a journalist by interviewing a vicious serial killer, Cletus Kasady, played by Woody Harrelson, who becomes the host of Carnage, the alien spawn of Venom.

Actor Ben Platt reprises his Broadway role as a high school senior with social anxiety disorder who gets caught up in a fellow classmate’s suicide. Cast headliners include Julianne Moore and Amy Adams. The movie is projected to generate less than $10 million in ticket sales (Sept. 24-26) compared with Shang-Chi’s $13.8 million. The film stirred up controversy in the weeks leading up to its release for, among other things, having a 27-year-old Ben Platt portray a high schooler.

All, except Copshop, are available digitally, with Cry Macho and Malignant streaming free to HBO Max subscribers.

The Disney/Marvel Cinematic Universe release Shang-Chi and the Legend of the Ten Rings again led all movies at the domestic box office, generating an estimated $21.7 million in ticket sales through Sept. 19. The tally is expected to push the movie past Disney/Marvel’s Black Widow ($183.2 million) as the top-grossing domestic movie in the pandemic era.

While Shang-Chi performed as expected, the title received a setback of sorts when the Chinese government did not include it in its list of approved theatrical releases — as it did for MGM’s latest James Bond actioner No Time to Die (Oct. 29) and Warner Bros. Pictures’ Dune (Oct. 22). As usual, politics is playing a role as both the lead star and director of Shang-Chi are Chinese ex-patriots.

The other new release, Open Road’s Copshop, starring Gerard Butler, generated $2.2 million across more than 3,000 screens to finish outside the Top 5.

Disney/Marvel Cinematic Universe release Shang-Chi and the Legend of the Ten Rings is expected to maintain its grip on the domestic/global box office following a record Labor Day debut.

Notably, Shang-Chi has no China release date, a significant loss considering Marvel movies typically generate 10% to 20% of their global box office in the world’s most-populous country.

New releases include Warner Bros. Pictures Malignant, which is expected to generate $6.5 million across 3,800 screens. The movie will also stream concurrently on HBO Max. Sony Pictures’ Show Me the Father ($2.3 million at 1,073 screens) and Focus Features’ The Card Counter ($1.1 million across 580 screens) also arrive in theaters.

The fiscal largess from Disney’s $90 million Shang-Chi and the Legend of the Ten Rings opening weekend box office continues to spread throughout the Hollywood food chain.

Shang-Chi opened to a reported $90 million for its domestic opening weekend Sept. 3-6. This is approximately triple the previous Labor Day opening weekend record of $30.6 million set by Rob Zombie’s Halloween in 2007.

“For two overarching reasons, this Labor Day weekend in the United States has been an important milestone for AMC as we steadily work to generate a recovery for our business,” CEO Adam Aron said in a statement. “This is the very first weekend that our attendance numbers were ahead of those of the same weekend pre-pandemic, since we closed our theaters in March of 2020.”

Disney’s Shang-Chi and the Legend of the Ten Rings topped expectations, generating an estimated $90 million across 4,300 North American screens over the four-day Labor Weekend ended Sept. 6. The first Asian-American led Marvel Cinematic Universe superhero release added another $56.2 million internationally, to bring its global total around $136 million. Shang-Chi has not yet been released in China or Southeast Asia.

The movie’s $75.5 million three-day total through Sept. 5 ranked as the second-highest in the pandemic era behind Disney/Marvel’s Black Widow, which generated $80 million in its opening weekend through July 11. Shang-Chi also edged Universal Pictures’ F9: The Fast Saga, which realized more than $70 million in its June 27 domestic opening weekend box office.

Meanwhile, Disney’s Jungle Cruise topped the $100 million box office threshold after selling another $5.2 million in tickets, despite also being available concurrently as a Disney+ add-on. Disney-owned 20th Century Studios’ Free Guy, starring Ryan Reynolds, is also approaching the century mark in domestic ticket sales, adding an estimated $11.2 million. It is not yet available on Disney+.