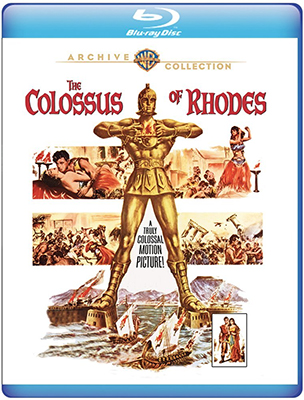 OK, so you’re Lea Massari, and it’s obvious to see that you’d look mighty nice in a tunic, toga or $2.98 “street dress” I recently saw advertised in an ancient newspaper ad for Murphy’s Department Store. But you’ve just worked with Michelangelo Antonioni himself in L’Avventura, which is worth a lot of prestige currency. And now someone wants you to take the female lead in a Totalscope sword-and-sandals epic called The Colossus of Rhodes — script by the chief scenarist of the Steve Reeves “Hercules” pics (along with five cohorts) and opposite John Derek — except that there’s been a falling-out, and the new star is an in-the-area Rory Calhoun.

So what’s the story on Rory, Massari might have asked — given her likely lack of familiarity with Westerns like Red Sundown, or Utah Blaine or The Saga of Hemp Brown. Nor had she likely heard Calhoun’s MGM Records single (same label as Hank Williams and Sheb Wooley) of the theme tune for 1957’s Flight to Hong — which a friend of mine used to own (I once held it in my hands, as if it were a cache of gold dust). This same friend, I might add, saw Calhoun in Delmer Daves’s The Red House in 1947 and was so intrigued that he was later inspired to give his firstborn “Rory” as a middle name.

But I digress. All oddball casting amusements aside, this amusing 1961 sprawler’s other claim to fame is its status as the first directing credit of Sergio Leone (he had already served as a replacement director on the earlier Last Days of Pompeii)  — though from an autuerist angle, there isn’t a whole lot of future trademark stuff to be gleaned, other than lots of detail in the 2.35:1 image, decent actor blocking and no reticence to let the running time hit 128 minutes. In other words, there’s not much of that crazy Leone framing where something is happening on both the upper left and bottom right of the frame simultaneously, which in the early days of broadcast or VHS made pan-and-scanners seek medical help (preferably a doctor who specialized in bleeding patients).

The plot? — oh, yeah, the plot. We’re in Rhodes, 280 BC, as Jack Webb might have said in an opening voiceover. Greek war hero Calhoun (call me Darios) is visiting his uncle during a dedication of a humungous Apollo statue — the movie’s most impressive feature and in the ballpark of memorability with that towering Talos in Ray Harryhausen’s Jason and the Argonauts, which would hit theaters a couple years later. The structure has nooks within, scads of steps so that the hearty can reach the top (though even some of the male specimens here might get winded negotiating them) and such little extras as a device that shoots hot lead on enemy soldiers who are trying to scale it. Some of these doused assailants in the later battle scenes react as if they’ve just been hit with asteroids.

Such fortification is needed for the king (Serse) because he’s taking it from everybody, and like all those doughy despots from the sword-sandals genre (think of both Charles Laughton and Peter Ustinov playing Nero), he suggests the kid in Bad Santa after he grew up. A key subordinate would like to take over the crown, and as if this weren’t enough, the island’s slaves are none too happy that this Apollo was built with the expendable labor of cheap talent, much as the slaves also put forth for the constructing that giant Pyramid in Howard Hawks’ Land of the Pharoahs (a much maligned blockbuster that, like Martin Scorsese, I like a whole big bunch). In Vegas, the Sands announcer always introduced Dean Martin as appearing “direct from the bar,” but the entire male supporting cast here must have been “direct from the weight room.” These guys look as if Jane Powell and Debbie Reynolds are going to show up any minute from Athena to feel their muscles (and that at least some of them likely won’t care one way or another).

If you wait long enough through the runny Eastman Color with which Warner Archive has wrestled, lots of buildings and structures made with painted styrofoam (or whatever they used) take a tumble during what I assume to be God’s Wrath. To get there — and, again, the movie is never less than a ticklish time-killer — there’s more time than usual watching Rory/Dalios trying to get under the pristine white garb of Lea (as Diala), though it isn’t always easy to read her mind. It’s good to see that Rory’s rascal-ish nature as an actor (can his intentions be entirely trusted?) was pliable enough to serve even a day at the gym like this one. Thanks to a bonus commentary by (Leone biographer) Christopher Frayling that hits just the right balance between film/historical scholarship and droll humor, we learn that Calhoun’s rather odd way of standing here was an attempt to cover up the tattoos he’d gotten back in his pre-Hollywood days when he served serious some time for some wayward-youthy hot-car follies. This obfuscation was no small deal because the deluxe gatefold Decca LP of the soundtrack to Spartacus had contained a serious art study of Kirk Douglas’s vaccination scar.

The friend who loved The Red House Calhoun in The Red House was taken by that very good melodrama’s nominal punk character who was still easy to like on screen. I myself became a fan after catching a late 1954 first-run screening of an easily above-average Universal Western, Four Guns to the Border, directed by an actor (Richard Carlson) who just months before had been moonlighting on screen battling the Creature from the Black Lagoon (who’ll rate a Blu-ray boxed set late next month, BTW). With its Region 2 DVD release to remind me, I still remember Rory and Colleen Miller out in Border’s lantern-lit barn getting sweaty during a rainstorm against a backdrop of hay — doing what folks do until they’re interrupted by her irate father (Walter Brennan), who’s not there to sing “Hello, Young Lovers” or to see if this is where he’d earlier dropped his store-bought teeth.

Calhoun’s following fell off after the preponderance of TV Westerns killed the market for at least the more modest of their big-screen counterparts, and after his CBS series (“The Texan”) ended its run — though apparently at the actor’s own request — he must have figured it was time to don the Greek Look. The actor’s greatest public moment of the ’60s was unquestionably his divorce from actress Lita Baron, who sued him on the grounds of adultery with 79 different women (a figure he said was low-balled). In addition to solidifying my fandom forever, this then topical episode captured the imagination of staffers at the hometown CBS affiliate where I worked during high school and college. One 60-ish guy on the floor crew who’d seen it all was also full of admiration. “If I were old Rory,” he noted to me as part of his mentoring role, I’d walk up to the bench and say, “Judge — I’m guilty as hell.”