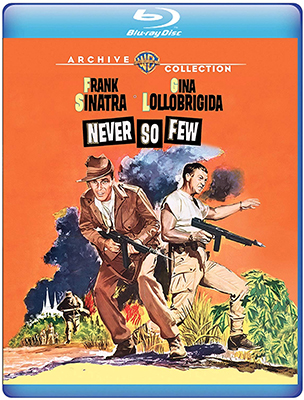 The odds of my writing about two Gina Lollobrigida movies in the same week are about the same as seeing Frank Sinatra in a goatee on screen (or, matter of fact, anywhere else), but here we are. For whatever reason in Never So Few, a chin-full of Francis follicles shows up early on in this glossy adaptation of a 1957 novel by Tom C. Chamales — but are soon dispensed with once we get to this yarn’s two dominant threads. And these would be: a) fighting the Japanese in 1943 Burma as part of an under-equipped OSS detail; and b) Captain Sinatra’s attempt to pry the more or less “kept” Lollobrigida away from a high-rolling merchant (Paul Henried) who, in one of the not infrequent scenes where the narrative takes a respite from the jungle, throws glitzy bashes for which the MGM set-dresser did a really bang-up job.

Sometimes a bad movie can be passable fun to watch in the home arena when there are historical (or otherwise non-aesthetic) reasons to do so, especially when the print is as immaculate as the one in this Blu-ray from Warner Archive. For the right person in the right mood, this one might be among those, though there’s really only one “must” reason to give this misfire with compensations a cursory whirl, and that’s seeing the emergence of Steve McQueen (then on the heels of TV’s “Wanted Dead or Alive” but not much else) into what now seems like inevitable stardom. McQueen plays the corporal/driver for Sinatra and his British counterpart-in-charge (Richard Johnson), and it’s a kick seeing the youngster, who was then about 28, interacting with his senior in movie rebel-dom, who looks admiringly amused. The two have a lot more chemistry than the future Chairman had with the King on Sinatra’s Welcome Home Elvis TV special from about a year later, and you can almost hear Frank saying, “Henry Silva and I were really digging you in that Blob thing, which is why I OKed you for this caper.”

Sinatra had that kind of clout, and, in fact, the corporal role was originally intended for Sammy Davis Jr. — who got bounced from the project when he went on a radio interview show and hinted that his superstar benefactor sometimes treated people harshly. In addition to keeping this picture from then qualifying as a footnote in the Rat Pack oeuvre (Peter Lawford is cast here as a military doctor), you have to believe that Davis’s firing necessitated a little script-doctoring, given a scene early on where McQueen beats up a couple of fairly burly guys. In fact, given Davis’s real-life ocular situation, you have to figure the army wouldn’t want him peeling rubber on Burmese dirt roads in a government Jeep. The payoff was that Few’s nominal director was John Sturges (probably forced by Frank to phone it in), who then cast McQueen in The Magnificent Seven and (speaking of peeling rubber) The Great Escape.

Getting back to what’s on screen (which isn’t as interesting) and speaking again of chemistry, Sinatra had more of the latter with the Nevada Gaming Control Board in 1963 than with Lollobrigida here, though you’d think that Old Home Country considerations just by themselves might have generated some sizzle. When you combine my comments here with the ones on Trapeze, I likely come off as a disser of “Lollo” (as I seem to recall she was termed), though I suspect the actress’s pre-Hollywood career in Italy was a lot more potent. For one thing, Kat Ellinger says so on the Trapeze commentary, and she thoroughly knows the material. For another, I fairly recently saw the actress’s substantial career-makers Bread, Love and Dreams and sequel Frisky for the first time, and both are delightful. (I’m pretty sure Bread was the first foreign-language film I wanted to see as an 8-year-old during my weekly devourings of the Sunday Cleveland Plain Dealer movie page). Lolo just didn’t register well in domestic productions, and December 1959 was a bad month for her all around when she also co-headlined one of the era’s most snake-bit undertakings, Solomon and Sheba, which gave the originally cast Tyrone Power a fatal on-set heart attack and further ended King Vidor’s five-decade directorial career. I did like Lollobrigida’s 1961 Come September, though substantially because Bobby Darin sang “Multiplication,” which we about-to-be ninth graders thought was a dirty song.

Few is more fun when Sinatra’s captain tosses out the book and stays sassy: talking back to nurses, combatting institutional racism against the campaign’s Kachin colleagues and risking an almost certain court martial for defying orders to combat Chinese renegades who’ve been killing American soldiers. The last confirms a couple things we already knew — that Brian Donlevy was great at playing grizzled old army generals and that when Whit Bissell was a child, the pediatrician must have said to his parents: “This lad was put on this earth to grow up and play army psychiatrists.” A most handsome picture, Few was shot by Sinatra favorite William H. Daniels, who before that had been an Anthony Mann favorite and a Greta Garbo favorite and before that had photographed Greed. In an alternate universe, one can imagine Sinatra on location in Death Valley for the famed climax of the Stroheim picture, with Daniels saying, “Don’t worry Frank; we’ll fly in Dean with the liquor cart for your trailer-with-a-pool — plus some Vegas showgirls who want to get a really deep tan.” Either it was this kind of excess or simply the impressive Burma-Thailand-Ceylon location shooting, but Few’s swollen budget prevented it from covering its costs, even though a lot of people did end up paying to see it. Sinatra was Ruler of the World at the time, and Come Dance with Me had been a monster hit earlier in the year on LP.