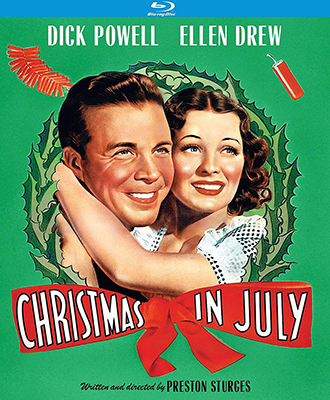 As the funniest, and likely only screen treatment of a familiar premise to exhibit a little depth on the side as well, Preston Sturges’ 1940 Christmas in July is widely regarded as that revered comic comet’s most underrated writing-directing achievement — a point reiterated here on a Blu-ray commentary by sharp and thoughtful film historian Samm Deighton (her speaking voice is easy on the ear as well).

This farce with a heart could hardly be otherwise given its short running time (67 minutes) and a Sturges cast that doesn’t include the likes of Henry Fonda or Barbara Stanwyck or Joel McCrea or Claudette Colbert. Its lead is Dick Powell, who, make no mistake, is way up there in my personal pantheon of all-time favorite actors — but only after Murder, My Sweet turned him into a recipient of crushing Mike Mazurki strangleholds to launch him as one of the most bedrock film noir figures ever. In July’s case, Powell was here amid his Paramount tenure during that strange period bookended by his days as a fading Warner Bros. tenor and a reinvented specialist of shadowy intrigue at several studios (with an occasional comedy thrown in). His fairly obscure Paramount output (including a couple Technicolor musicals) is so ill-revived that it’s tough to make ultimate judgments, but there’s no question July was his standout achievement there unless you want to count his vocal introduction (with Mary Martin and the Golden Gate Quartette) of the Harold Arlen-Johnny Mercer Hit the Road to Dreamland in Star Spangled Rhythm.

Based on an unproduced (until 1988) play by Sturges himself that already had gathered dust for years, the movie casts Powell as a New York tenement dweller someone who’s both realistic and a dreamer at the same time. That is, he’s hard-nosed enough to think he can’t afford to marry his girlfriend (Ellen Drew) until his fortunes improve — and yet somehow remains convinced he’s going to win the radio jingle contest held by a coffee company that’s a rival to the one that employs him (nice touch there). The plot turns — actually, it’s more like a huge semi that jackknifes on a mountain road — when three pranksters in his office (one of them played by future Republic Pictures mainstay Rod Cameron) send Powell a fake telegram informing him to come on down and get a check for 25 grand, which is about half-a-million in today’s currency.

That this ruse gets is far as it does is a partial product of all the in-house mayhem at the contest-sponsoring Maxford Coffee Company, which is populated by all those Sturges stock company cranks and crackpots with their magnificent comic faces: Raymond Walburn, William Demarest, Franklin Pangborn, Al Bridge, Jimmy Conlin and so on. Walburn is the boss, forever complaining that the executive subordinates he can never locate never tell him what’s going on in the company, though let it be said his bulb is dim when it’s not flickering. As Walburn hands the money over to Powell without knowing any better, his “team” is in 12 Angry Men-style deliberations to determine the real winner, with Demarest the immovable holdout in what would be an otherwise unanimous decision.

Once Powell starts negotiating the check he holds but hasn’t yet deposited into material goods, any plot recitation approaches spoiler territory. Suffice it to say that instead of blowing the stash on trips to Vegas or cartons of champagne, he instead purchases very specific gifts for practically the entire block — while simultaneously seeming to glean as much satisfaction from his improved job prospects at work as the contest win that, alas, isn’t. The raucous scene where his generous handouts occur is the picture’s visual standout — and this from a writer who could additionally direct for the eye as well as showcase actors (a triple threat, in other words). There’s a bit where Powell gifts a handicapped child, probably with polio, with a doll; the moment is warm and not maudlinly calculated because Sturges knew exactly when to turn off the spigot. It’s a quality that served him so well in Hail the Conquering Hero, which will always be my favorite Sturges film (of course, it doesn’t hurt it be the son of a World War II Marine).

Deighton’s commentary is much less interested in conveying biographies of cast and crew here than in examining the ways in which July and the other Sturges classics fit into the most complicated worldview of a filmmaker who had a go-get-em capitalist for a father and a mother who was such an artistic free spirit that her best friend was Isadora Duncan. His upbringing whiplashed Sturges into a complicated admiring/ridiculing view of capitalism and (having lived internationally as a child) an unambiguously ridiculing view of American politicians. The Maxford executives may be business execs, but (thanks in no small part to the supporting cast), they don’t exactly surprise of us by coming off as the equivalents of the ward heelers in Sturges’ immediately preceding directional career-maker The Great McGinty.

Simply by default, July probably is the least of the Paramount Sturges brief run, not counting that puzzling dramatic misfire The Great Moment, which muddied the waters for him at Paramount and significantly led to his departure — a whopper of a mistake for both parties. But it’s still the real deal and instantly identifiable as a Sturges picture and a somewhat better one than I remembered. The transfer isn’t any 4K job, but the result even looks better than I expected from a comedy that’s not minor but was low-budget. The following year, though, would bring both The Lady Eve and Sullivan’s Travels, which was and is about as big-time as movies got in the early 1940s.