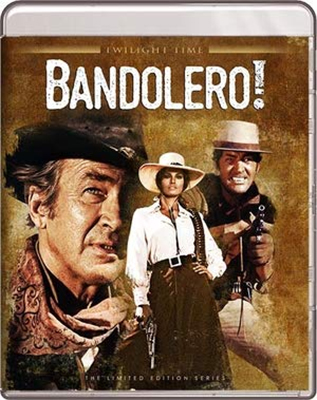 Say, what did mom and dad look like? This is the unavoidable stumper posed by 1968’s Bandolero! when we’re handed the proposition of James Stewart and Dean Martin cast as brothers — this, apparently, after someone either shook or stirred the gene pool with a mighty big swizzle stick. Of course, these were the days when John Wayne and Michael Anderson Jr. (respectively 56 and 22 at time) had played bros as well just three years earlier in The Sons of Katie Elder, proving that these two siblings’ own folks did not want for protracted action on the range. But to argue the other side, did you want to see Stewart or Wayne in a ’60s Western or Alex Cord? And besides, if you went by Wayne and Stewart’s advanced ages alone when they made The Man Who Shot Liberty Valance before seeing it, you’d never know it was a great movie.

Bandolero! isn’t anywhere close to great, but it is on the higher side of drive-in boilerplate adequate, and nothing could have kept me away from a Stewart-Martin pairing in 1968. And in what’ll likely be a surprise for many to hear (as it was to me), Larry McMurty himself must have liked this film a lot because he borrowed some of the character names and situations when he wrote Lonesome Dove. At a time when 20th Century-Fox was fast depleting a lot of its Sound of Music haul on a lot of big-budget projects that tanked, here were Jimmy and Dino offering (for them) unusual characterizations against the usual backdrop of the era’s Western character-actor pretty faces: Dub Taylor, Denver Pyle, Don “Red” Barry, Rudy Diaz and the like. And for a legitimate pretty face, there was also Raquel Welch, at a time when her One Million Years B.C. poster adorned more college dorm walls than post-party-time Thunderbird upchuck. That couldn’t have hurt the grosses — and in fact, Bandolero! proved to be solid small-town fare, though I seriously wonder if it did as well as the engagingly enthusiastic commentary by Tony Latino, Lee Pfeiffer and Paul Scrabo (film buff extraordinaires when it comes to  All Things Rat Pack) says on this new and extremely good-looking Blu-ray’s bonus feature.

The major surprise here is that Martin plays his role as an habitual outlaw responsible for the bank robbery deaths of townsfolk deaths totally straight, and this was at a time when his Thursday night NBC variety hour highlighted him as the consummate tuxedoed jester. In fact, it was fairly unusual for him to play a villain of any kind, though this film was sandwiched between two late-career Westerns in which he did as well: Rough Night in Jericho (so reprehensible in this one that he gives Jean Simmons a tough time) and Showdown. A lesser surprise here but still a bit out of left field is a Stewart performance that’s alternately twinkle-eyed and dead serious, which somewhat reflects the picture’s uncertain tone, There are some funny early touches involving Stewart disguising himself as a hangman — before a grim final quarter where the body count piles up.

Tossed into this an unlikely Welch, cast as former prostitute who’s just been widowed by the richest fogey around and sitting on a lot money (which, interestingly, isn’t pursued as a plot point). After the post-bankjob Martin and his grungy gang escape the gallows with a major assist from Older Brother, Welch by fluke joins the getaway, where it’s inevitably rough on the Texas-to-Mexico desert trail. Even so, and after days of this, her hair looks great, face looks great and the great William Clothier’s ornery camera momentarily reveals that she’s wearing pantyhose in an attempted rape scene. No wonder Dino is smitten, as is a sheriff played by George Kennedy. Good luck on the latter yearning, though it shouldn’t be forgotten that Kennedy later did get to make out on screen with Bibi Andersson in The Concorde … Airport ’79. Kennedy and Andersson: It kind of reminds me of the time Sandra Bernhard was on Letterman and noted how much she wanted to see 1986’s Delta Force because  “Chuck Norris and Hanna Schygulla don’t work together that often.” (Geez, George Kennedy was in that one, too, as was Joey Bishop; I’d better pull the old DVD out of my jeans closet.)

Martin and Welch had some history. The bonus commentary trio mention the YouTube-available clip from the 1979 Oscarcast (honoring ’78 releases) when a slurring Dino got so gamey with his statuesque co-presenter that she got embarrassed and tried to move on. But there’d also been the classic “Hollywood Palace” show of 1964 — the same one where Martin dissed the Rolling Stones on their first U.S. TV appearance and introduced “Everybody Loves Somebody,” whose 45 had been in out in stores for such a short time that he said they “haven’t even punched the  holes in it yet.” At show’s end, a pre-stardom Welch came out (introduced as simply “Raquel”) with Donald O’Connor, and Martin spent the entire interlude looking down her dress. This was not exactly “Omnibus.”

Cinematographer Clothier was a constant enhancer of films with and by John Ford, John Wayne, Stewart and Bandolero! director Andrew V. McLaglen, and I was glad to hear Messrs. Latino, Pfeiffer and Scrabo note that even the intentionally drab Liberty Valance is actually superbly shot in terms of shadows and lighting (as when Wayne emerges from the alley in the climax). And if the movie by itself isn’t enough to offer a hint why Jerry Goldsmith was one of the real go-to composers of the day, someone in that trio rattles off Goldsmith’s stellar credits from this same general period, and you wonder how the guy even had time to shave in the morning.

Both the robbers and Kennedy’s unenthusiastic posse become predictable targets of the title’s gringo-hating Mexican Marauders, which likely would make Bandolero! a favorite in the White House viewing room were Trump not the first president since, like, Polk not to watch movies in the WH (whatever you want to say, Nixon was movie-crazy, and not just for Patton). Also doing their part to up the corpse quotient is the crew of lowlifes who make up Martin’s gang (to brother Stewart’s chagrin). These include Sean McClory, who looks as if he never left that Irish pub in Ford’s The Quiet Man, a cantankerous old slug played by Will Geer and the latter’s cretinous son, who should have been put down not long after his birth.

The movie isn’t distinguished, but in some ways it’s a mild curio, and this Twilight Time release can serve as a demonstration Blu-ray of how a Panavison DeLuxe Color Western of the late ’60s would have looked on its best pre-release mint-print day (say, in Fox’s old New York critics’ screening room that was on or around Tenth Avenue, the one where I saw Rex Reed make a dismissive gesture on the way out of Russ Meyer’s Beyond the Valley of the Dolls). I appreciate that the commentators here love their red-meat cinema — the same trio is great on Twilight Time’s release of the Sinatra-in-Miami toughie Tony Rome — but let’s just say that every movie and every person would love to be as lauded with same vigor these enthusiasts throw Bandolero!’s way. This is all well and good, but even before we get to foreign releases or co-productions released earlier in other countries, 1968 was the source of 2001: A Space Odyssey, Petulia, Rosemary’s Baby, Madigan, Oliver!, Funny Girl, Faces, Bullitt, Night of the Living Dead, Pretty Poison and Monterey Pop. It’s hardly the biggest deal in the world, but let’s allow our historical dimensions to take a deep breath.