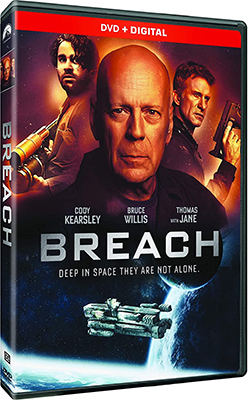 Set hundreds of years in the future, Breach focuses on giant spacecraft tasked with ferrying hundreds of thousands of people to a colony world to escape Earth, which is being ravaged by plague. Most of the colonists and crew go into suspended animation, leaving a handful of engineers and custodians to keep the ship operating for the duration of the voyage.

Willis gives a one-note performance as the gruff head janitor, who has to deal with a stowaway (Cody Kearsley) who was rejected for the trip despite his pregnant girlfriend being the daughter of the admiral in charge of the ship.

Meanwhile, an alien parasite begins to kill the few crew members who are still awake, and takes over their bodies to form an army of the undead that tries to sabotage the ship and destroy the human colony. It’s up to Willis to rally the survivors to take back the ship and save the day.

While the film makes a game attempt to present some gritty sci-fi on an obviously tight budget, there’s not much here any self-respecting sci-fi fan won’t have seen before Viewers will probably have more fun trying to spot all the plot points borrowed from better movies. Some of the more obvious ones include Alien, Venom, Sunshine, Armageddon, Interstellar and Passengers. Just set up a drinking game and call it a party.

The DVD comes with a digital copy but no bonus materials.