After a surge in overall media consumption, including TV viewing, during the height of the pandemic in 2020, consumers will continue record consumption — except via the TV.

New data from eMarketer found that the average daily time spent with media increased to a record 13 hours and 21 minutes in 2020 — up 58 minutes from 2019. That daily average is expected to decline by 9 minutes to 13 hours and 12 minutes in 2021. 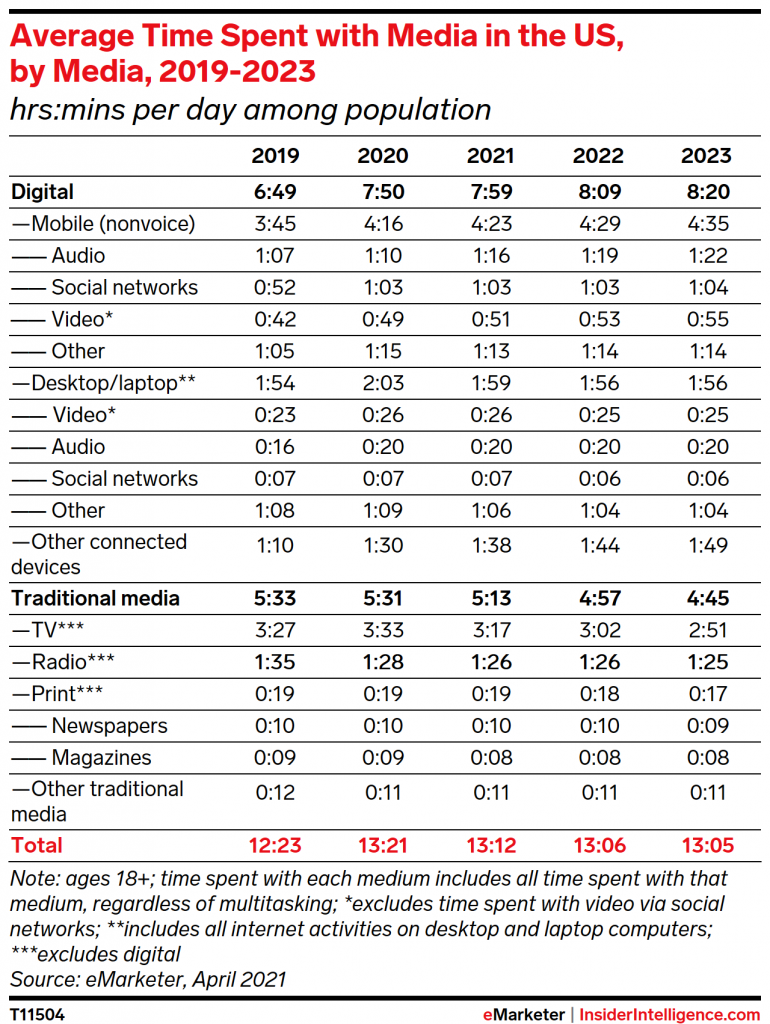 The report found that among U.S. adults, the daily average media consumption across digital devices will increase by 9 minutes a day in 2021 — even after adding more than an hour in 2020.

The surge in digital media means that the average time spent with traditional media will continue to decline. The data shows legacy media consumption will drop 5.7% this year, which eMarketer attributes to people spending less time watching traditional TV.

Indeed, the report found the average U.S. adult will spend 18 less minutes consuming traditional media this year — 16 minutes of which will come from declines in TV viewing time. U.S. adults will also spend slightly less time than last year listening to radio and consuming print media this year as well.

“Ultimately, 2020 was an anomalous year for TV,” wrote Audrey Shomer, author of the report. “The medium picked up minutes for the first time since 2012, as people spent more time watching TV news about the pandemic, U.S. elections and social unrest.

“This year, however, TV will reverse its 2020 growth and fall below 2019 levels. We expect that time spent watching TV will continue to contract: The average U.S. adult will spend another 15 minutes less with the medium in 2022, and 11 minutes less in 2023.”