On this week’s episode of the Media Play News Podcast, hosts Charles Parkman and Charlie Showley introduce a new segment to the show: looking ahead to the coming month’s most anticipated streaming shows and movies, according to data collected by Whip Media. With 20 items on the list, there’s plenty for the hosts to chew on, and they share their opinions on what is worth looking forward to and what can be skipped. There’s plenty of Avatar 2 discussion as its premiere approaches and, to no one’s surprise, it’s the No. 1 most anticipated movie of December.

Charlie sums up his thoughts with “The Peripheral” and “1899” now that he’s finished both series. In summation, the former is a promising new sci-fi show with the potential to become great, but the latter doesn’t live up to its premise and, in the host’s opinion, fails to be consistent with its storytelling. Charles talks about a fun YouTube channel, “Watcher,” which has a recurring series “Puppet History,” consisting of exactly what the title implies: historical events reenacted by puppets.

Looking backward in time, Charlie and Charles dissect a list of top shows from 2022 according to The Economist, along with shows they themselves liked most. Stay tuned to the end to hear what is worth revisiting from this past year!

On this week’s episode of the Media Play News podcast, hosts Charles Parkman and Charlie Showley run through a lightning round of reviews for shows they’ve been watching. First up is The Guardians of the Galaxy Holiday Special, which John Latchem reviewed for MPN. Charles shares his thoughts about it, as well as a quick recap of the Marvel Phase 4 set of movies and shows, as this special concludes that series. He also gives his predictions for what to expect in Guardians of the Galaxy Vol. 3, James Gunn’s final Marvel-directed movie before committing fully to leading the DC franchise at Warner Bros.

Afterward, Charlie updates listeners on his progress through the Amazon Prime series “The Peripheral” as well as the new cerebral Netflix drama “1899.” The former has proven to be a solid new sci-fi series, but, as for the latter, according to Charlie, it’s off to a rocky start.

At the box office, Black Panther: Wakanda Forever unsurprisingly still took the No. 1 spot over the long Thanksgiving weekend. Glass Onion: A Knives Out Mystery debuted on a limited number of screens but didn’t make a big splash. The hosts, who are both huge fans of the original, expect it to do extremely well on Netflix when it makes its streaming debut in late December. But looming on the box office horizon is the juggernaut Avatar: The Way of Water. It’s no question as to whether it will dominate ticket sales when it finally drops; the question is, exactly how much.

Lastly, the hosts cover an article announcing that Amazon has ordered a miniseries to cover the recent collapse of the FTX cryptocurrency exchange, to be produced by the Russo brothers. Charlie follows that particular tech sector closely and gives some context for the collapse, and the trend of studios to produce miniseries about similarly spectacular implosions of tech companies like Uber, WeWork and Theranos.

On this week’s episode of the Media Play News podcast, hosts Charles Parkman and Charlie Showley dive into reviews of The Munsters and the 4K re-release of In Bruges. The Munsters is interesting because of a notoriously poorly edited trailer promoting the release of the movie, which negatively colored Charlie’s opinion of the movie. All Charles has heard is “it’s fine,” which falls in line with John Latchem’s thoughts in his review. As for the review of In Bruges by Scott Marks, Charlie has seen it and gives it his endorsement.

During the episode intro, the hosts cover a video essay titled the bizarre world of fan edits and restorations, which details the explosion of independent film edits that were kicked off with a cut of The Phantom Menace, spread far and wide by the earlier days of the internet. These cuts are compiled and available at FanEdit.org.

Lastly, Glass Onion: A Knives Out Mystery will get a week-long theatrical release across all three major theater chains in November. Both Charles and Charlie loved the first movie and are looking forward to the sequel. However, at the box office, the post-summer slog continues with horror movie Smile netting the most revenue from ticket sales, but still only in the low $20 million range.

On this week’s episode of the Media Play News podcast, hosts Charles Parkman and Charlie Showley dive into the remastered 1950s classic Bright Victory, followed by the newest MCU movie Thor: Love and Thunder. Unsurprisingly, the hosts have more to say about Thor than a 70-year-old war movie, although Scott Marks’ review of Bright Victory does present some stark differences in cultural norms and script writing relative to modern movies. As for Thor, in spite of John Latchem highlighting the elements that make it a bright, fun movie, Charlie isn’t sold on it because he’s sick of the overbearing lightheartedness of many recent Marvel movies.

At the box office, in spite of (or, perhaps, partly because of) its pre-release controversy, Don’t Worry Darling took the No. 1 spot this past weekend. More interestingly, a theatrical re-release of Spider-Man: No Way Home (with a few minutes of deleted scenes spliced back in) appeared in the top 5, and even more astonishingly, Avatar made its return to theaters ahead of its anticipated sequel’s release in December. Both hosts puzzle over the paradox of Avatar having such a tremendous cultural impact when it was initially released in 2009 and soon after vanished from mainstream consciousness.

On the streaming front, Netflix has announced 120 (!) new and continuing movies and shows. Charles and Charlie are looking forward to a few of the offerings, but with that many announcements, there’s bound to be something for everyone.

On this week’s episode of the Media Play News podcast, hosts Charles Parkman and Charlie Showley cover John Latchem’s review for Disney’s “Toy Story” tie-in movie Lightyear, which rather than being a standalone movie that happens to feature the titular action figure is ostensibly a movie that takes place within the universe of Toy Story itself. Charlie argues that Disney jumped through a lot of logical hoops to set that premise up.

The hosts then cover Latchem’s review of Prey, streaming on Hulu, and its stripped-down plot reminds them of the original Predator. The biggest drawback to the first movie was immediately spoiling that there was an alien, and the hosts hope that Prey plays its first act as a straight 18th century period movie until the predator makes its appearance.

It was National Cinema day over Labor Day weekend, and both Charles and Charlie have stories about rude moviegoers out at the theaters. Finally, the long-awaited, most expensive TV show in history, “Lord of the Rings: The Rings of Power” has debuted on Amazon Prime with the streaming service’s largest-ever viewership count for a series.

On this week’s episode of the Media Play News podcast, hosts Charles Parkman and Charlie Showley cover the special releases of some classic “Star Trek” flicks, all starring the original cast of the first “Star Trek” TV series. For the first time, every theatrical “Star Trek” release has been remastered in 4K and brought to physical discs with unique special features, designs, and bonuses included in the box sets, all detailed by reviewer John Latchem. The hosts’ preferences may lean closer to “Star Wars” than “Star Trek,” but they still share some fun anecdotes about the series.
Afterward, Charles and Charlie cover the close of an extremely weak August box office, which had significantly lower ticket sales than August 2019. Charlie complains there’s almost nothing he’s interested in seeing in spite of Jordan Peele’s Nope still available in theaters, and “House of the Dragon” being renewed for a second season after its pilot pulled 20 million viewers since its debut.

On this week’s episode of the Media Play News Podcast, hosts Charles Parkman and Charlie Showley cover reviews of the star-studded The Lost City and the DC Animated superhero movie Green Lantern: Beware My Power, both written by John Latchem.

DC may not be having too much luck with live-action movies when compared to the MCU, but it’s been slowly building an animated connected universe, the most recent of which is Green Lantern. Parkman caught an early showing of Green Lantern at Comic-Con and has some thoughts.

Meanwhile, Netflix is trying to spin up its own extended universe around its recent release The Gray Man. Will it succeed? Will it fail? The general buzz surrounding it has been overwhelmingly positive and the similar Netflix action thrillers Showley has seen lead him to think it’s worth checking out. 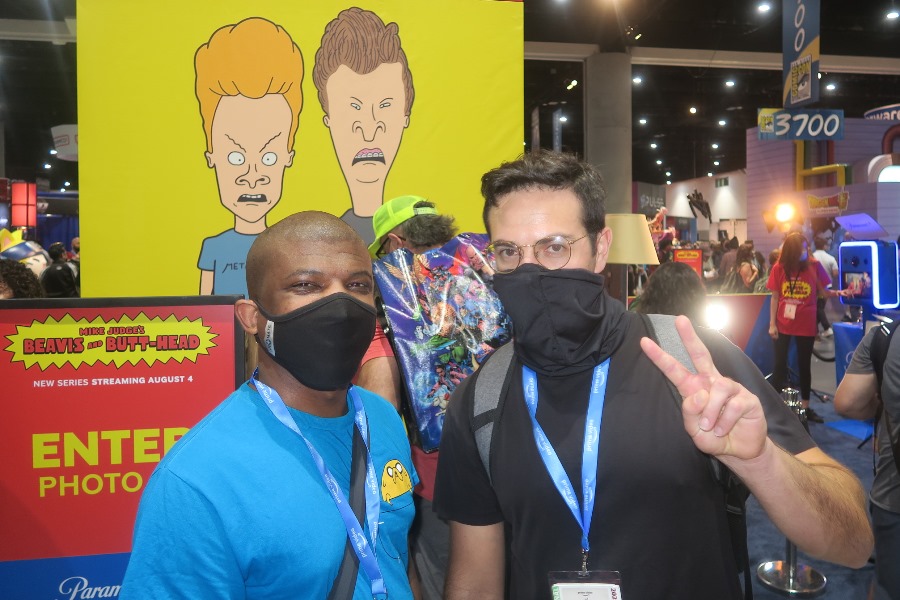 In this special episode of the Media Play News podcast, hosts Charles Parkman and Charlie Showley talk about their experience at the 2022 San Diego Comic-Con. The main floor was bustling, the lines stretched for miles, and the surrounding downtown area was transformed by studios’ promotional booths for upcoming movies and shows — although the crowds at the Gaslamp Quarter appeared much lighter than in the past.
Friday had the duo exploring the show floor and catching an early screening of the next season of “Archer.” Saturday and Sunday, Charles returned to the convention to see multiple live podcast recordings of pop culture reactions, behind-the-scenes Q&As of classic superhero cartoons, and cultural analyses of Justice League characters.
Yeah, we know Comic-Con’s a visual thing — but sometimes a word is worth a thousand pictures (and even if that’s not even remotely true, give our podcast a listen!).

On this week’s episode of the Media Play News Podcast, hosts Charles Parkman and Charlie Showley cover John Latchem’s reviews for “Star Wars: Obi-Wan Kenobi” and season 6 of “Billions.” The hosts agree that this latest foray into a “Star Wars” series had promise, but still isn’t the smash hit that Disney+ is looking for. Regardless, it’s nice to see the prequel movie leads Ewan McGregor and Hayden Christensen return to their early 2000s roles.
Meanwhile, Minions: The Rise of Gru smashed box office expectations to have the biggest ever July 4 weekend opening, but even stranger was the Gen Z trend of dressing up in formalwear to see it. Finally, Apple TV+ has announced its slate of panels for San Diego’s upcoming Comic-Con later this month, including announcements for “Severance,” “Mythic Quest,” “Foundation” and more, all of which have been renewed.