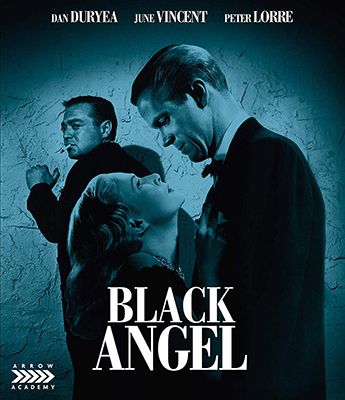 Was there something in the cinematic vapors during the late and immediately post-World War II years when it came to big-screen chippies getting murdered in their apartments, leaving their innocent husbands or lovers to be pursued by the cops? Universal’s Black Angel, adapted from a Cornell Woolrich story, has its own way with this premise, though in certain particulars it recalls Alan Ladd’s plight in the Raymond Chandler-scripted The Blue Dahlia, which Paramount had released just four months earlier. Not only is there an obvious kinship between their respective titles, but the murder victim in Dahlia is played by Doris Dowling — real-life sister of actress Constance, who has the counterpart role in Angel.

Beyond this, there had been Phantom Lady from a couple years earlier, in which Alan Curtis’s lesser half gets strangled with one of his own ties, and the parties who can supply a legitimate alibi aren’t cooperating. In this case, there’s more of a creative direct line with Angel because Lady, too, was taken from a Woolrich work and released by the same studio. If you’re still following this, you’re a) a better than man than I am, Gunga Din; and b) maybe getting a sense that Hollywood was going to this narrative trough to arguable excess around this time.

The big takeaway from Angel, at least speaking personally, is just how much of a visual stylist director Roy William Neill apparently was (this was his final film before passing away later in 1946 under circumstances somewhat murky, albeit with no foul play involved or alleged). I haven’t seen much Neill beyond his Sherlock Holmes pictures — and those, with one exception, not lately — so it is was a revelation to let the often elaborate nature of Angel’s camera set-ups sink in during the movie’s many nightclub scenes (Paul Ivano was the cinematographer). I had seen the picture a couple times before but never looking as great as it does on this new Arrow Blu-ray — nor with A-Team bonus commentator Alan Rode on the voiceover, basically applying a prod that kept saying, “Mike, just look at that.”

Still. This is one of those pictures easy to admire for its sometimes surprising craftsmanship, and I’m impressed by how many admirers it has, even if Woolrich wasn’t among them. But just to keep our feet on the ground here, the film isn’t all that much on emotional resonance when you stop to think that 1946 (one of those movie years that cleans the plow of 1939, imo) was also the year of The Best Years of Our Lives, It’s a Wonderful Life, Notorious, My Darling Clementine, Beauty and the Beast, The Big Sleep, Great Expectations, Panique and, for that matter, Road to Utopia. Still, it keeps you going like bowls of salsa and chips, while offering the almost novel experience (at least for the 1940s) of seeing Dan Duryea in a sympathetic role, albeit as one seriously messed-up dude here. Musician Duryea’s not the one who stands accused of bumping off Dowling (Constance, that is, who was the knockout of the two real-life sisters), but he was once married to her, and her rejection has driven him to such drink that he has to have someone keep an eye on him in the more or less flophouse apartment where he lives.

The guy the cops are after is Dowling’s lover, who is married, trapped in someone’s blackmail scheme, and (oh, yeah, right) soon to be executed after a trial that’s gotten out of the way mighty quickly in screen terms (I think this happens as well in Phantom Lady, if I recall right). The role here goes to John Phillips, who, like Alan Curtis in Lady, is so nondescript that the film takes something of a hit. This is more debatable, but I’m also not too crazy about June Vincent, cast as Phillips’ rather remarkably devoted wife who teams up with Duryea to clear her husband (let it not be said that the unhealthy subtext here fails to provide a viewing alternative to the same movie year’s Courage of Lassie). Though adequate — original plans were to have a young Ava Gardner in the role as an MGM loan-out — Vincent reinforces the perception that Universal had a real problem cultivating conventional female leads with the charisma to catch on. Which is to say that, Deanna Durbin and Maria Montez were specialized personalities, to be sure; Marlene Dietrich was only there for about a five-year run that, yes, did include Destry Rides Again and The Spoilers, but she both made and strengthened her legacy elsewhere; and Ella Raines (a personal favorite), while amassing several credits there, found two of her career roles (in Hail the Conquering Hero and Tall in the Saddle) at other studios.

Fortunately, Duryea still doesn’t have to carry the charisma load all by himself. Peter Lorre has a key role as a shifty nightclub owner with surface charm, and watching him is like watching a friendly baseball batter get tossed a lollipop by a pitcher who wants to date the batter’s sister, so directly is the part even as written (by Roy Chanslor) in Lorre’s wheelhouse. Broderick Crawford plays the cop who seems to show up like the Cavalry at every perilous moment, and he, too, fits right in — though as Rode notes, this was before the actor commenced his gruff period when his All the Kings Men Oscar was followed quickly by Born Yesterday. This means he’s a more subdued Brod than he came to be — and certainly more so than on TV’s “Highway Patrol” (also referenced here on Rode’s voiceover) in which Crawford’s Dan Mathews character was likely the kind of guy who likely wouldn’t even have been able to order a BLT without bellowing for extra mayo. The great Wallace Ford, too, is a welcome presence — or as welcome as one can be when you’re part of the seedy male hit parade that resides in Duryea’s dump of an apartment.

Angel floats somewhere in that amorphous region where it can be categorized of both an ‘A’ or ‘B’-movie, depending upon who’s talking. Universal didn’t ever have big bucks to spend, but it sprung for $600,000, which would have been a lot of haircuts for the Wolf Man, to keep in the studio vernacular. As suggested earlier, the atmosphere goodies of the nightclub sequences can hold their own with any screen rival’s of the period, and this was a rich period for nightclub sequences (Raoul Walsh’s wonderful The Man I Love, starring a woman I loved, Ida Lupino, came out the same year). Rode all but says as much on his commentary, though the movie still bothers me by the way the trial is glossed over and how one has to believe that eventual plot revelations as things progress would almost certainly have come out earlier via any halfway competent lawyer. On the other hand, this is how you keep a movie running a taut 80 minutes until a finale that’s not your everyday tidy-up.

As always, Rode comes heavily prepped from having studied studio production files, and he was also great friends with Duryea’s late son Richard. The latter point contributes to tidbits, which, among many others, inform us that the actor taught himself to play five numbers to make more convincing his performance as a piano player (the two key women here are vocalists) — and that in real life, the actor was a real homebody who enjoyed getting out of his Fritz Lang lapels and gardening in dumpy duds. (I’ve heard that one before, but it’s a tough image to avoid sharing.) There’s also an on-camera interview with British film historian Neil Sinyard, another favorite of mine and one who’s something that film folk almost never are: jovial. He and Rode both relate a great aside I’d never heard previously, which is that Crawford was such a practical joker (he also loved the sauce, but we won’t go there) that he ate Frank Sinatra’s toupee on the set of Not As a Stranger. Dooby Dooby puke, which is apparently close to what happened, for a Frank fate arguably more humiliating than even the then imminent Johnny Concho.