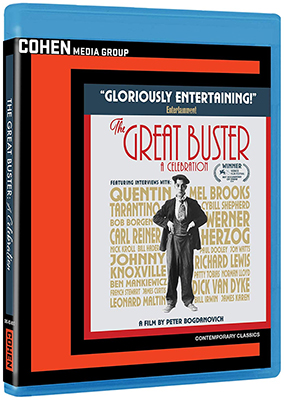 Though he spent act 2 of his life being discarded for years in the manner that Americans, in particular, so often subordinate and even toss away genius, Buster Keaton did live to see the early stages of acclaim that he deserved just before his death — though this was nothing compared to the huzzahs that followed. His inventively risk-heavy comedy and not always recognized skill as a director have both been the subjects of many books and documentaries over the years, including the wonderful Buster Keaton: A Hard Act to Follow doc that Kevin Brownlow and David Gill produced for Thames TV in 1987. Now, here’s The Great Buster from non-slouch Peter Bogdanovich, a project made on commission and for good reason.

Charles S. Cohen of Cohen Media Group, which brings out consistently handsome Blu-rays of keenly curated fictional movies and documentaries, acquired the library of the independent Keaton features that constitute the latter’s best-known works and decided to do something more than just show them. As a result, the bounty has gotten new 4K treatment, and if the excerpted clips here are any indication of what’s coming when Cohen releases the features, someone should be cueing up Alfred Newman’s famed sis-boom-ba-ish Conquistador theme from Captain From Castile. Practically as we speak, I just got the Cohen press notice marking May’s release of a twofer made up of The General and Steamboat Bill, Jr., a double bill that’s about as good as life until the day that Amy Adams calls me up to do shooters or to play baseball trivia the way she did in Trouble With the Curve.

Cohen hired Bogdanovich, who was an apt choice for this tie-in tribute, though the filmmaker/journalist/historian does sound a bit fatigued reading what is otherwise a concise narration (well, he’s been through a lot over the years). Continuing a subject-matter zig-zag that has already produced previous PB docs on both John Ford and Tom Petty, this hour/40 Keaton overview hits most of the key points with some major surprises when it comes to unearthed twilight TV footage — unexpectedly but shrewdly stockpiling a lot of the central features’ most evocative clips until the final third or quarter to send everyone out with a laugh.

Many of the “amazers” are here, including the waterfall rescue of Natalie Talmadge (Keaton’s real-life wife) in Our Hospitality); the acrobatic flips, falls out of windows other invitations to contusions (one of which resulted in a broken neck that escaped notice for years); and, of course, the front of the house falling on Keaton in Sherlock. According to the narration, the star had just been hit with a couple instances of bad news in his personal life before taking on the stationary stunt — so in addition to its built-in danger in the first place, Keaton’s mind probably wasn’t fully on a bit that could have easily have killed him.

Keaton had a generous spirit. He never knocked his father for all but dribbling him like a basketball during toss-arounds in the family vaudeville act that trained him, nor (as an adult) did he particularly hold a grudge for the cretinous suits at MGM who basically ruined his career after Keaton ignored the advice of Chaplin and others to relinquish his indie status to labor for the Metro machine. Leonard Maltin, who’s one of many interviewed here, makes a point that hadn’t occurred to me: that Keaton, Laurel & Hardy and Abbott & Costello all did their worst work at MGM, one of the lesser publicized legacies of a studio that hadn’t a clue of what to do with them. It all brings to mind Jerry Lewis’s old line that accused someone (Hal Wallis?) of having “a sense of humor like Goebbels” — and though Red Skelton had some success at the studio, maybe it’s no coincidence that it was Keaton himself who supervised the gags on a couple Skelton vehicles, including one of the best (A Southern Yankee, which was a kind of riff on Keaton’s The General).

As previously alluded to, Keaton did a lot of TV commercials late in his career, and someone here has done a yeoman job assembling these, many of which are quite funny — as is Keaton’s bit in Richard Lester’s fractured film of A Funny Thing Happened on the Way to the Forum (excerpted as well). There’s even a clip or clips from Keaton’s foray into Roger Corman bikini-ville for AIP in the ’60s shortly before Keaton’s death, serving to remind us that there was indeed a time in the industry when Keaton could share a frame with Frankie Avalon. Such were the changing routines in an era when one could see The Maltese Bippy and I Am Curious (Yellow) theatrically as new releases on the same movie night (which I did, though admittedly, the second was at an Ohio vice squad screening).

A lot of comedians from differing generations show up to pay homage, and many are quite good. Dick Van Dyke had and has street cred because he delivered Keaton’s eulogy at the time, while Mel Brooks claims BK as a major influence when it came to shattering the fourth wall on screen. Bill Hader has already established himself as legitimate film enthusiast who knows what’s what and what’s not, and I have to say that Johnny Knoxville (whose oeuvre does not rank with my favorites) earns major bonus points for the warm awe he projects in his appreciation for the Keaton derring-do that undeniably links with Knoxville’s own work, if not exactly with the same artistic payoff.

The bonus extra is a half-hour public Bogdanovich appearance/Q&A — introduced by Cohen and moderated by Richard Pena, who has to work mightily to keep Bogdanovich awake during exhaustion from the preceding hours’ promotion of Orson Welles’s The Other Side of the Wind, which was being prepped at the time. On top of this, there’s a jarring sound problem that obscures the questions from the audience (Gay Talese is somewhere out there), making the experience less than ideal, though what Bogdanovich has to say is interesting. The main event, though, falls squarely into the what’s-not-to-like category.