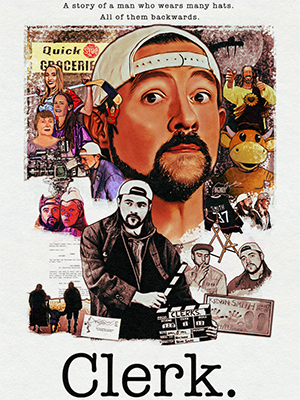 Kevin Smith’s love of movies led him to make the 1994 indie comedy Clerks. Little did he know how much his self-funded labor of love would not only propel him down a path toward becoming a pop-culture icon, but bringing a degree of fame to those in his orbit as well.

The documentary Clerk. Is an exploration of that journey.

The film traces Smith’s life story from his childhood in New Jersey, to attending a film school in Canada on a whim. Inspired by Richard Linklater’s Slackers, Smith realized he didn’t need the backing of a major Hollywood studio to make a movie. And put himself in it, creating the character of Silent Bob, paired with his pal Jason Mewes as Jay.

The success of Clerks did bring Hollywood calling, landing Smith a gig to write and direct the film that would become 1995 Mallrats. And while that film was both a critical and commercial failure, it gave Smith the fodder to return to the indie fold with 1997’s Chasing Amy.

Using interviews with friends, family, fellow filmmakers and Smith himself, Clerk. chronicles the trajectory of Smith’s career to the present, from creating a shared universe of characters to tackling bizarre concepts such as Tusk, and how a heart attack led him to return to the world of Jay and Silent Bob.

Clerk. is a fascinating look at an unlikely Hollywood career. Smith’s fans in particular will eat it up, as it plays like a mega bonus feature for his entire filmography.