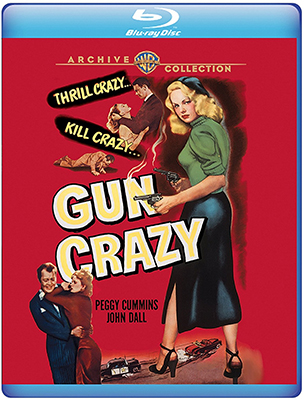 Paul Schrader, who should know, wrote an essay decades ago listing 10 or so titles that defined film noir, and the ‘B’-with-better-than-‘B’ talent initially known as Deadly Is the Female ended up making the cut. Yet even on the modest grindhouse level, the ultimately retitled Gun Crazy didn’t perpetuate the turning of many box office turnstiles, which is kind of surprising given how punchy and innovative so much of it is.

It doesn’t take much clairvoyance to speculate that this is a movie likely admired by author James Ellroy — who, most appropriately, leads off an hour-plus “what is noir?” doc that’s included on this pristine Blu-ray edition and carried over from a great previously released Warner Entertainment DVD box set devoted to the genre. L.A. Confidential’s source author has his own definition of noir, which is a little more brass-tacks basic than Schrader’s. It has to do with those women who give you the best sex of your life and then end up {insert the predictable Ellroy verb} in the other way as well. Think of the fatalistic Detour syndrome, even if it’s kind of tough to imagine Ann Savage’s character in that dime store classic offering much in a filmy negligee. Spiked heels, maybe.

As one of two married Midwest stickup practitioners whose prolific work habits eventually clog up the region’s APB transmissions, Brit blonde Peggy Cummins plays Crazy’s deadly female half, though she seems more mentally unbalanced than all-out evil. Or at least she does until later in the game, when her self-proclaimed perpetual “nervousness” when pulling off jobs unleashes a previously submerged violent streak — to say nothing of her willingness to use a child as a shield against pursuing authorities while on the lam with her husband. As “DVD Savant” Glenn Erickson notes on the commentary, their official vow-taking was obviously mandated by film censors of the day because living in sin was worse than bumping off victims during armed robberies.

Cummins’ better half (and he is) is played as a child by Russ Tamblyn when he was still billed as Rusty and then by John Dall. The latter is best known these days as the half of the murdering duo in Hitchcock’s Rope who isn’t Farley Granger — though you can also see also see him being smarmy-and-a-half as Laurence Olivier’s guest in the pricey seats (the kind the Steinbrenner family would have at Yankees games) to watch Kirk Douglas battle Woody Strode to the death in the Spartacus arena. Despite this screen history, Dall is a rather sweet guy here: irresistibly drawn to guns but exclusively for their tactile features and not out of any any desire to harm people. Thus, when he meets Cummins as part of her target-shooting job in a carnival, he likely figures that her own attraction to “heat” must be purely recreational as well.

As miscalculations go — though make no mistake, these two really love each other, which may be all he more twisted — this lapse of judgment has to rank with convincing yourself that you’ll be set for life after one last job, despite the fact that you splurge for furs and hit the nightclubs every time you pull a big score. A lot of Gun Crazy’s reputation rests on the superb point-of-view feel to a couple robbery scenes in particular: its influences on Bonnie and Clyde that were even noted in the late ’60s by in-the-knows. I was surprised to learn on Erickson’s commentary that director Joseph H. Lewis had a 30-day shooting schedule — not the kind of time, to be sure, that gave David Lean his countless hours to “wait for the light” but maybe enough for a resourceful ‘B’ director like Lewis to give far more shots than not a novel angle.

Like the breakthrough Dillinger, which to this day gets a surprising number of comely women to “go” for the real life Lawrence (Rap Sheet) Tierney, Gun Crazy was produced by the King Brothers — who were so penny-pinching that I even heard the late humorist Art Buchwald (who was once a friendly  acquaintance) make an out-of-the-blue wisecrack about them. But the Kings weren’t above hiring Blacklisted writers at a fraction of their cost, which is how the non-existent Robert Rich (“fronting” for Dalton Trumbo) later got a writing Oscar for The Brave One, which ended up becoming a preliminary step in breaking HUAC’s hold on the industry.

In Crazy’s case, it’s Millard Kaufman fronting for Trumbo (sharing credit with MacKinlay Kantor, who wrote the source short story) to further class up a melodrama that already had Victor Young score and Russell Harlan behind the camera. I’m always amazed how a lot of the great cinematographers often hopscotched between big productions and small ones (Harlan, a Howard Hawks favorite, had shot Red River just two years earlier). And also that he later pulled off Oscar nominations for black-and-white and color work in the same year, 1962: To Kill a Mockingbird and Hatari!

The Blu-ray is quite a showcase for Harlan’s abilities on a tight budget, and I’m not just talking about camera movements. We don’t often see a ‘B’-movie — or, if you like here, “shaky ‘A’” — getting major-scale high-def treatment, and there are shots here of rain puddles during a nightclub chase scene and of a listening brook that almost made me blink with their clarity and element of surprise. It really makes me wonder what the new 4K version of Detour can possibly look like — a joint effort of worldwide archives way beyond the imagination of the ’40s Hollywood establishment for a movie that probably hasn’t looked all that good since the time I was spitting up on my crib bumpers.

Like a lot of talented working directors who didn’t have their projects handed to them on a platter, Lewis had a spotty career. A lot of people love My Name Is Julia Ross from 1945 and some of his other postwar Columbia’s, though my No. 1 choice has to be 1955’s The Big Combo, complete with its gay henchmen and what Jonathan Demme once volunteered as having the “first cunnilingus scene in American movies” when I expressed my love of the film after spotting a VHS copy in his office. (I suspect this is technically true, unless there are some ancient Stroheim outtakes floating around the MGM archives).

Despite a marked disparity between its best scenes (many) and clunky or merely functional ones (just a few), Gun Crazy would be a clear No. 2 on my Lewis list — one of the achievements that does indeed define film noir, as well as a presumed show-up on just about anyone’s standout movies from 1950 (and it was a very fine year). Great job, Warner.