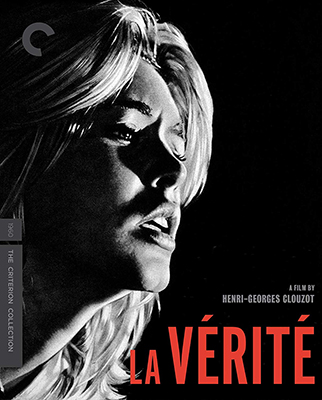 Understandably marketed as The Truth when, for obvious reasons, this Columbia Pictures pickup of a 1960 film got wider U.S. distribution in 1961 than most imports, Henri-Georges Clouzot’s La Verite is the movie that proved Brigitte Bardot had real acting chops and then some — a revelation that apparently had been at least hinted at in 1958’s Love Is My Profession. That Jean Gabin co-starrer is one I’ve yet to see, so I can offer no first-hand ammo, but La Verite’s reception at the time (it was eventually a foreign-language Oscar nominee) is news that even at the time got to my home state Ohio, where both BB’s tease-ish comedies and now this emotion-charged courtroom drama played theaters on the other side of town that were impossible for a young adolescent to reach without wheels. Sometimes we get to these treasures slowly.

A structurally lumpy yet intriguing 128-minute portrayal of murder-trial brutality spun off of tragic events we see played out in extensive flashbacks, La Verite also turned out to be the penultimate film completed by writer-director Clouzot, whose relatively tiny feature output over three-plus decades included Le Corbeau, The Wages of Fear and Les Diaboliques. Those combined credits alone deserve to get anybody into any exclusive “club” of important filmmakers, even if Francois Truffaut, for one, was pretty vocal about not caring for Clouzot’s style. Oh, well, time passes on, even for auteurists like me, and I’m too old for old arguments these days; pass the Maalox.

As London-based film scholar Ginette Vincendeau emphasizes in her Criterion liner notes, on-set tyrant Clouzot had four female screenwriters collaborating on the script (including his actress-wife Vera, who died at 46 about a month after La Verite opened in France). This has to help explain why the picture has a such a strong feminist bent, though Clouzot notes in one of Criteron’s bonus inclusions of archival interviews that his main purpose here was to note how difficult it is to discover “the truth” when passing judgment on another person. That point is in no ways blunted here, but I was also struck by — like, maybe every 30 seconds or less during the trial scenes — the overwhelming misogyny of nearly everyone involved, save Bardot’s defense attorneys.

She’s on trial for murdering her lover (a breakthrough performance in an emotionally demanding role by Sami Frey), who had previously been engaged to Bardot’s sister (Marie-Jose Nat). A French virgin (speaking of exclusive clubs, if we go solely by PR), the latter does everything by the book, is a dutiful daughter much favored by the two siblings’ parents and for a while, even provides shelter and food for her carefree sister, who can’t even get out of bed to shop for groceries. In other words, Bardot does herself no favors when it comes to any kind of societal support system. She’s sullen, flaunts her great looks to take advantage of men and is not a person one can count on … well, forget in a pinch, but in any situation. Some of this may be chalked up to immaturity; Bardot was 25 or maybe even 26 when she made La Verite, but I wonder if the character as written may have a little younger.

Aspiring symphony conductor Frey is treated sympathetically for much of the movie (he takes a lot of emotionally spent bullets before Bardot follows up by attempting to gas herself on the scene), but his own behavior doesn’t always bear scrutiny. Ambitious and dogged by rehearsals, he should likely stick with his more supportive fianceé (a musician herself) who can take it. Instead, it’s tough not to avoid the thought that he might be using Bardot sexually — and that there’s scant chance that he’s projecting a future where she sit in the balcony as an adoringly dutiful mate as he conducts a Bach concerto. On the other hand, Bardot does have a habit of knocking on his door at 3 a.m. to force him maybe halfway out of pajamaed sleep stupor — only to discover that the knocker is a woman who looks like … Brigitte Bardot. In keeping with the movie’s subtext of examining French jurisprudence, you be the judge.

Again, Clouzot indicated that his intention wasn’t to take on The System here, but even given that it is prosecutors’ roles to make the accused or unfriendly witnesses look as wretched a possible, these men (and they are men — and primarily older ones as well) really pour it in when it comes to the Bardot character’s sexual history. Of course, from all the morally offended clucking from women witnessing all this from the gallery, it appears as if, French or not, this public reaction may be simply reflecting the attitudes of the country’s society as a whole in ’59 and ’60.

In this vein, remember that Bardot’s own love life and the so-called scandals it engendered enabled a lot of fringe show biz journalists to pay their bar tabs at the time — so if we can momentarily substitute the film industry for justice, it all reminds me of Paul Schrader’s recent and very true remark that current movies will get better when audiences do. Atop all this, the film also reinforces the international truism that prosecutors and defenders are frequently friends when they’re out of court and amassing their own bar tabs. At the very end, the predominant opposing attorneys (played by familiar faces and outstanding actors Paul Meurisse and Charles Vanel) note that “next week” they’ll be on opposing sides in another case.

Both actors worked super-memorably with Clouzot before: Vanel as the suicide-mission colleague who gets flattened by Yves Montand’s water-submerged moving truck in Wages — and Meurise as the study in sheer nastiness from Les Diaboliques, which additionally gave Vera Clouzot her one great claim to screen fame in a very limited acting career. Apparently, her husband worked her to the bone when she had a serious real-life heart condition that eventually killed her, and there’s a famous story (reiterated a couple time in the bonus section) where the director slapped Bardot on set to get the right response  — apparently, this was part of his standard directorial repertoire — only to have her slap him back and stomp on his foot. Which apparently improved their relationship.

Still (akin to fellow tyrant Otto Preminger’s alternative self), Clouzot projects a civilized demeanor and pipe-smoking urbanity in two of the three Criterion bonuses, with the third of these going to Bardot in an extraordinary 1982 documentary excerpt where she relives what she had to go through in terms of press scrutiny when her son was born and her second marriage was busting up. The much longer of the two Clouzot profiles is a 2017 doc that covers a lot of early material — including the filmmaker’s temporary postwar banning from industry employment due to having worked for Nazi or Nazi-controlled authorities in making apolitical films during the war. Then he went out and made Le Corbeau, whose heavy criticism of anonymous accusations pleased the Occupational forces not one bit. Apparently, Clouzot liked to do things his own way, including taking on a project as insane as Wages was in the first place.

Addressed some, but not a lot, is Clouzot’s attempt to film L’Enfer (later realized by Claude Chabrol well after Clouzot’s death), which was curtailed after going disastrously over budget amidst a Clouzot heart attack, leaving a lot of tantalizing color footage with intended lead Romy Schneider. Thus, this release, above and beyond its being in 4K for a sterling presentation, makes a bittersweet companion piece to 2009’s Henri-Georges Clouzot’s Inferno — which Arrow Academy released on Blu-ray exactly a year ago and which includes extensive footage from the boxes of shot footage that were eventually unearthed.