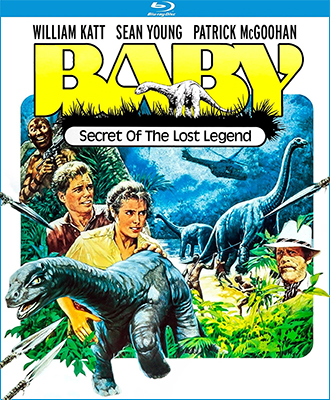 This 1985 adventure from the Disney studio plays a bit like Romancing the Stone if the central object everyone seeks was a dinosaur.

Sean Young and William Katt play a married couple on a research expedition in Africa, where they stumble upon evidence of a family of brontosauruses living in the jungle. It soon becomes a race against time to find the rare creatures, in order to protect them from other members of the expedition who want to exploit them for fame and glory.

Katt was coming off several seasons of the cult-classic superhero TV show “The Greatest American Hero,” and one of the main reasons he took the role in Baby, he admits in a new bonus interview included on the Blu-ray, was because he liked the idea of shooting in Africa. Sean Young, on the other hand, was on the rise after Blade Runner but still relatively early in her career; No Way Out was still two years in her future.

The film also boasts Patrick McGoohan as the lead scientist of the expedition who becomes a one-dimensional villain in his quest to find the dinosaurs and take all the credit for discovering them. And his sniveling sidekick is played by Julian Fellowes. Yes, that Julian Fellowes, years before he would be better known as the Oscar-winning writer of Gosford Park and creator of “Downton Abbey.”

The visual style of the film places it firmly at a crossroads between goofy creature features of the 1950s and 1960s, and the advanced visual effects techniques to come in the 1990s.

In his own retrospective interview on the Blu-ray, director Bill Norton points out that this was one of the last major live-action movies centered on dinosaurs that used practical effects, before Jurassic Park would come along (eight years later) and show everyone how to do it with computer graphics.

In the mid-1980s, however, CGI was still a nascent visual effects technology, best used for depicting holograms, video games and other things not meant to be perceived as “real” (not that The Last Starfighter didn’t try to do it just a year earlier). Young Sherlock Holmes, often cited as one of the early breakthroughs in depicting CGI creatures, wouldn’t hit theaters until nine months after Baby.

So, here the dinosaurs are essentially giant puppets. As a result, Norton laments, even as advanced as the craftsmanship of the 1980s had become, the old-school techniques weren’t quite up to snuff in generating the realism of the dinosaurs he was looking for, and one of his biggest challenges was figuring out how to shoot the film in such a way so as not to highlight the fakeness of it all.

What ends up on screen is just charming enough to accept for the story, but high-definition isn’t doing it any favors when the shots linger just long enough for viewers to focus on Baby’s obviously rubber skin and eerily unnatural eyes. The look of the dinosaurs is not unlike an animatronic one might expect to find at a Disney theme park had the movie been successful enough to inspire a ride based on it. (While Disney’s Animal Kingdom park in Florida does have a dinosaur-themed land, its attractions are based on other sources.)

The film’s title and the cutesy design of the baby dinosaur puppet suggest a family friendliness that is belied a bit by an unexpected level of sexual innuendo and violence. As Katt suggests in his retrospective, the film had a harder edge to it that the film’s marketing may not have properly translated to older audiences, while at the same time turning off parents looking for some appropriate entertainment for their kids.

With all this going on, Baby: Secret of the Lost Legend is certainly a minor curio for anyone interested in 1980s film history, but it’s of particular nostalgic interest to me since I remember seeing it in theaters when I was about 10 (and probably hadn’t seen it again until this Blu-ray, save for any TV airings shortly afterward). I don’t recall why I would have wanted to see it back then, aside from the fact that I liked dinosaurs as a kid (and still have an affinity for them). I also watched “The Greatest American Hero” fairly regularly, and maybe seeing that show’s hero on the big screen was a selling point. However, like most things remembered from childhood, the particulars of the plot didn’t stick with me as much as a general sense of what the movie was, which to me has always been “the one where Sean Young finds a baby dinosaur in the jungle.”

So, yeah, this was my first exposure to Sean Young, and don’t think that scenes of her clad in her underwear lying in bed in a humid African hut, or trying to get it on with her husband in the middle of the jungle while the curious young reptile keeps interrupting, don’t leave an impression on a young boy.

Of course, looking back it’s easy to laugh at how out-of-place any attempts by the characters to get frisky were given the situation, as it provides just the unlikely plot point needed to propel the film into its third act — the inevitable need to rescue the cute creature from the bad guys who want to exploit it. (In this case, when Baby is shooed away by the lovebirds who up to this point in the film have been doing everything they can to keep an eye on it. But, hey — nature calls, right?)