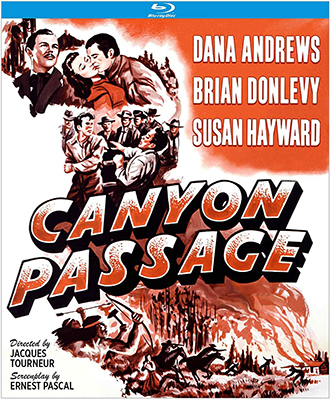 So it’s sometime in the mid-late 1960s, and one of the local TV stations was giving my adolescent self his first chance to see Canyon Passage, a Walter Wanger-Jacques Tourneur Western that sounds as if it has a lot going for it even beyond its status as a generously budgeted undertaking by Universal Pictures in 1946 — shortly before the merger that transformed the studio into Universal-International for close to 17 years. I notice that an unexpected curiosity in Passage’s fairly pressure-packed cast is brilliant songwriter, surprisingly engaging singer and sometimes actor Hoagy Carmichael, which inspires the broadcast’s host to ask during one of the commercial breaks (yes, kids, this is how they did it until the dawn of the 1980s), if anyone knows which Carmichael movie was the one where he sang the Oscar-nominated “Ole Buttermilk Sky,” which was among his best compositions.

That’s the setup. Later, my host came back sheepishly to admit that just as it said in the opening credits, Carmichael sang it in this one — though in a way, he could be forgiven. Here’s a song that ended up going No. 2 Billboard for Hoagy himself and No. 1 for Kay Kyser (a super-catchy rendition with future talk show host Mike Douglas as vocalist). Even so, the movie throws it away just before the end credits roll. I’m going through all this because it’s indicative of an impressively budgeted production that always seems to be a little “off,” though you can make a case that some may regard its idiosyncrasies as a plus. Plus, in addition, as noted, it has a lot of ‘A’-list components.

Set in pre-Civil War Oregon amid a settlement that’s pretty isolated even by Northwest standards of the day, Passage was, I think, only the second Technicolor Western Universal made following the previous year’s Frontier Gal. That one was no more ambitious than the usual Rod Cameron picture, but Passage had no lack of casting cred (note the actors listed up top here); Edward Cronjager (Heaven Can Wait, The Gang’s All Here and Desert Fury) behind the Technicolor camera; Ernest (Stagecoach) Haycox providing the original literary source; and director Tourneur taking his first stab at color in any genre between his black-and-white masterpieces of Cat People and Out of the Past. Of course, the visual component meant nothing on early ’60s TV showings because mass purchasing of color sets was a couple years off, and stations weren’t yet even running color prints. Thus, this Kino Lorber release makes for a fairly stunning visual experience, though you can’t tell at first because the opening shot is set of muddy streets during a monsoon.

Dana Andrews is the lead, from during that remarkable three-year run in which he also starred in Laura, State Fair, Otto Preminger’s Fallen Angel, A Walk in the Sun (if you like), The Best Years of Our Lives, Boomerang! and Preminger’s Daisy Kenyon. More interested in conquering the new frontier financially than getting serious about romance despite his definitely enjoying the company of women, he’s part of a situation that we don’t usually see in Westerns, at least as a major subplot: the inability of its protagonist to decide which comely lass in the territory (there’s more than one) he might want to wed, despite not exactly being awash in passion. The same is true of the women as well, which can sometimes threaten to induce viewer whiplash.

Andrews’ ostensible sweetheart is played by Patricia Roc, a major screen star in Britain seen here in her only Hollywood film, though she did reunite with Tourneur back home a few years later for the sleeper Circle of Danger, opposite Ray Milland. Though she and Andrews seem to have an “agreement” of some sort, he also has a repressed attraction to buddy Brian Donlevy’s semi-betrothed (Susan Hayward), who is much more obvious about a yen that’s more obviously reciprocated, though she mostly maintains decorum. Adding further complications are: a) a younger man in town who’s really crazy about Roc; and b) the fact that Donlevy is a very flawed and self-destructive character, albeit one of some sympathy. This is the kind of role underrated Donlevy knew how to play, though he could also do through villainy (Oscar-nominated for Beau Geste); comedy (The Great McGinty); military brass (Command Decision and playing Gen. Leslie Groves in The Beginning or the End) — all top an array of Westerns and sci-fi, some of it memorable. To say nothing of The Big Combo (now, there’s a movie).

This is a mining boom town, and Donlevy is kind of a banker of the miners’ gold holdings, shelling out crystal dust (same as money) to customers whenever they need it for day-to-day expenses or reveling. But because he’s in heavy gambling debt to the town’s professional gambler, Donlevy has started filching a little here in there from the bags left in his care, and you know that’s not going to have a happy ending. Meanwhile, we have Ward Bond playing the town’s utter slug — one so lacking in a single virtue that I sensed that Blu-ray commentator Toby Roan (who knows Westerns as well as anyone) couldn’t get over it. Yet Bond was such a great actor despite having the most odious politics in Hollywood that the character seems real and not a cartoon stereotype.

He and Andrews have longtime bad history, and the entire town (not just the local goons) keeping egging them on to settle things with a fist-fighting so they can place bets for pure entertainment — not unlike the way the Irish villagers do during the John Wayne-Victor McLaglen climax to John Ford’s The Quiet Man. The only one above all this is Carmichael’s town songbird on a mule; has there been a bigger market for them, he could have cornered the market on all Ichabod Crane parts. When the two adversaries finally do mix it up big-time, the result is one of the most brutal brawls I’ve ever seen in a vintage movie; Roan says that that both actors needed stitches at its conclusion, and I can believe it. The other major issue is attacking Indians (more often than, egged on by worthless whites), and Bond naturally has to be a major catalyst here as well.

According to Roan, Wanger and Tourneur had diametrically opposed ideas on the movie’s tone: producer Wanger wanted more emphasis on punched-up characters, while Tourneur (who won out) preferred distancing the story to make it more about the land and the era. Roan thinks Tourneur was right, but I don’t agree because that approach makes the picture just chilly enough to make it highly watchable but without that ultimate oomph that enables it to break from the historical pack.

Not too many years later, Andrews’ heroic battle with alcohol started hurting the quality and certainly budgets of his pictures— intermittently at first and then permanently, though some cult movies remained here and there including his Tourneur reunion on Night of the Demon. By the time the actor reunited with Hayward on 1949 for My Foolish Heart, he still commanded top billing, but she’s the one who got an Oscar nomination (her second since Passage). Life comes at you fast in terms of Hollywood careers, something that’s never changed and still true today. For a while, at least, Andrews came pretty close to being a superstar.