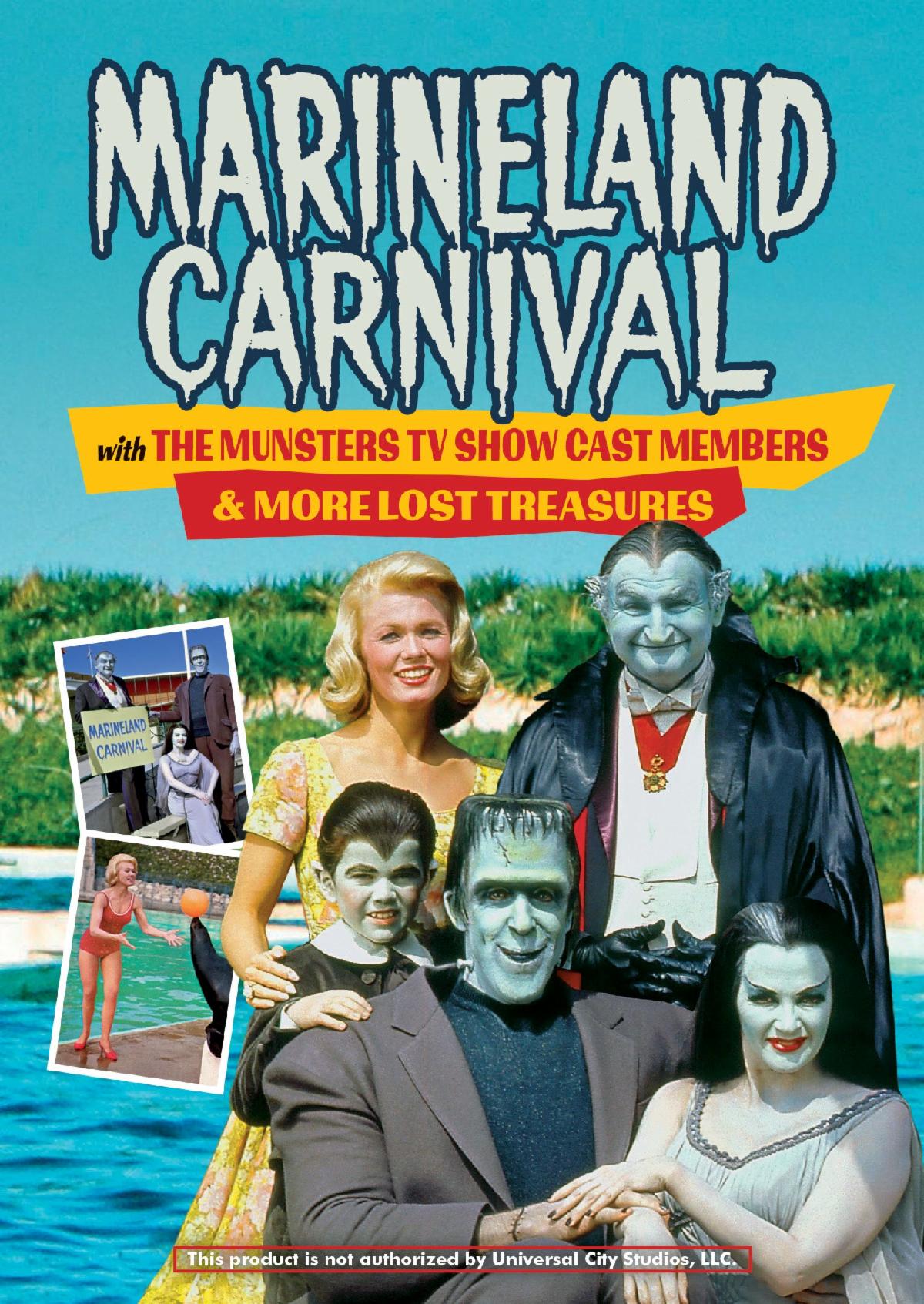 Growing up Jewish didn’t leave much in the way of Easter memories, but it’s impossible to forget where I was on April 18, 1965. It was on that sacrosanct Sunday that The Magnificent Amersons of Munsterdom made its one-shot television debut. The CBS special was long thought lost, and it would be decades before Marineland Carnival: The Munsters Visit Marineland (with special guests the New Christy Minstrels) was resurrected. Located at the tip of the Palos Verdes Peninsula in Los Angeles County, Marineland opened its doors in 1954. About 33 years later, SeaWorld purchased the popular aquatic attraction and moved the tanks and their contents south. Whatever connection the producers drew between a theme park, green-skinned monsters, and a Rinso white band of minstrels is anybody’s guess. From a historical perspective, the 60-minute spectacular is best viewed as a Paleozoic infomercial.

The show’s one-joke premise couldn’t be simpler: Herman (Fred Gwynne), Lily (Yvonne DeCarlo), Eddie (Butch Patrick), and the alternate Marilyn (Pat Priest) drove from Mockingbird Heights to Marineland of the Pacific to buy Eddie an exotic pet fish. Grandpa had it on good authority that Marienland was a fish store with giant tanks stocked with aquatic pets. The 376-year-old Jewish Dracula hated cute fish. Given his druthers, Grandpa would rather have taken Eddie on a bloody Taiji dolphin drive hunt similar to the one seen in the Oscar-winning documentary The Cove.

Despite fears that plug ugly niece Marilyn will terrify the sharks, she accompanied Eddie poolside to watch the New Christy Minstrels folk things up while Uncle Herman, Aunt Lily and Grandpa scoured the grounds for pets. Why does so much of the show take place in the parking lot? Marineland was delighted to host the Carnival so long as it didn’t get in the way of business. The doors remained open to the public during the taping. The steady barrage of carnival sideshow acts are about as welcome as a romantic subplot in a Marx Bros. movie. A daredevil in Grandpa’s clothing is assigned the task of scaling a flexible pole to which he’s to hook the official flag of Marineland. For what seems to be an eternity, the Grandpa double swayed back-and-forth, a feat that no doubt thrilled an audience of spectators, but lost luster when translated to the small screen.

Any resemblance to the weekly sitcom was purely coincidental. The only thing the family appeared to have packed for the trip were their makeup artists. Joe Connely and Bob Mosher, the creative forces behind both “The Munsters” and “Leave it To Beaver,” were nowhere to be found. “The Bell Telephone Hour” scribes Charles Andrews and Bill Gammie shared writing duties. (One assumes the seal, walrus and dolphin acts wrote themselves.) Director Bob Lehman came from a background in musical spectaculars (Harry Owens and His Royal Hawaiians) as well as game shows (“Truth or Consequences”), neither of which prepared him for America’s First Family of Fright. The show climaxes with Herman (Gwynne, not a double) thrilling the crowd by dangling a fish for the giant killer whale to leap from the pool and swipe from his stitched green mit.

They had me at “This product is not authorized by Universal City Studios, LLC,” but that was before realizing that the special features outclassed the feature presentation. Two fragments from “The Danny Kaye Show” usher in the supplementary features. A black-and-white snippet date-stamped Feb. 3, 1966, opens with Herman’s walk-on followed by a brief interview that ends with the promise of a sketch. Alas, the costume piece featuring Herman in the role of a human being didn’t make the final cut. Perhaps the folks at MPI wanted to limit the special features to Gywnne’s performances in green-face. According to IMDb, there was a show on Feb. 2, 1966, but there’s no mention of Gwynne’s name.

The following segment dated April 13, 1966, alone is worth the purchase. Forget about the quality of the skit — Kaye and Gwynne are joined by Edie Adams for a spoof on “The Huntley-Brinkley Report” titled “The Munster-Dracula Report.” This is one of only four times that I can recall seeing a Munster in full color. A pilot episode starring Gwynne as Herman and Joan Marshall as Mrs. Munster was filmed in 1964, followed by a 16-minute color demo reel that Universal presented CBS with. (Both are included on “The Munsters” season one DVD.) Neither Universal nor CBS would cough up the extra $10,000 per episode needed for color, so the show was subsequently filmed in black-and-white. The two-inch quad master of Marineland Carnival they found lounging in Grandpa’s lab was in pristine shape. But when it comes to oversaturation, nothing could rival the vibrant Technicolor hues found in their one-shot theatrical release, Munster, Go Home.

A skit from “’The Red Skelton Hour” featuring the two Freddys, Gwynne and The Freeloader, is the longest 23 minutes you’ll spend watching television all year. As a kid, Skelton’s desire to break character by constantly laughing at his own blubbering ad libs sickened me. His schtick has not aged well. When it came time for Herman Munster to plug his wares on another CBS show, Skelton, and Danny Kaye for that matter, didn’t appreciate the subtle brilliance of Gwynne’s characterization, choosing instead to treat him like a jolly green jejune goon off which to bounce lame monster jokes.

Next up, a surprisingly insightful May 30, 1968, appearance by Yvonne DeCarlo on “The Joey Bishop Show.” Her wig, a leaning tower Broadloom Bouffant by Monsanto, defied gravity and left one questioning how she ever managed to fit her head through a door frame. The actress hated the makeup — she wondered aloud how much more intense the lighting would have been had the show been shot in color — and was happy to call it quits after two seasons. The anecdotes fly fast and free. She happened upon a taping of “The Jack Benny Show” with special guest star Milton Berle. Uncle Miltie took one look at her green pallor and cobweb accoutrement and quipped, “Hello, Yvonne. Are you working today?” A Q&A with the mini-skirted DeCarlo fielding questions from the audience yields more discussion about the rigors of the makeup chair.

There’s an exclusive-to-DVD talking-head segment featuring Butch Patrick reminiscing about his role as Eddie Munster and what it was like growing up on the Universal backlot. We close with a cluster of original commercials capped by promotional tie-in for Cheerios. If I sound disappointed, you have my heartfelt apologies. Part of me is a bit crestfallen knowing that these might be the last bits of vintage Munsterabilia to be had. Truth be told, within a day of it arriving in the mail and I already watched the disc and its stellar supplementary features three times. If you’re a Munsters junkie, treat yourself to a hit of heroin.