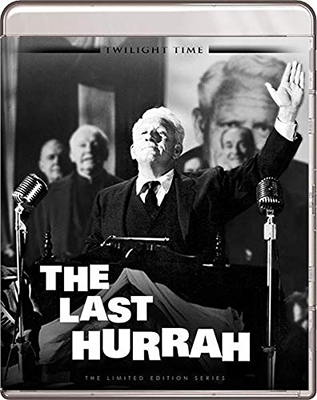 Both an unusual and natural project for John Ford to have taken on (and with enthusiasm at that), the director’s Fenway double-to-triple adapted in 1958 from Edwin O’Connor’s durably relevant bestseller is instantly recognizable as carrying the Ford stamp, notwithstanding the book’s own significant following. If it isn’t the subject matter — male members of Ford’s own family had been involved in New England politics — it’s the idiosyncratic humor he brought to nearly every set-up here, most evident in a wake scene that’s as much of an emblematic set piece as the Dodge City hijinks in Cheyenne Autumn or the twisted Nativity Scene in Donovan’s Reef. Then, there’s casting that pretty well cleaned out the roster of the industry’s Irish character actors, which is not to say that flinty WASPS (they lunch in the “Cotton Mather Room”) don’t get their licks in as well.

This is major Spencer Tracy, career-wise, though Ford had actually considered James Cagney (another automatic natural) and even John Wayne (who might have been surprisingly interesting in this Wings of Eagles stage of his career, though hardly a natural) in the role of Frank Skeffington, a four-time mayor of a city who’s running for one more term in an Eastern city coyly not identified as Boston. The character was famously modeled on Boston mayor James M. Curley, who like Skeffington, had also been governor of the state. Curley was less of a pure Robin Hood than his fictional counterpart, so it was something of a joke when he balked at the book’s publication and later sued producing Columbia Pictures for basically putting him on the side of the angels. Everyone should be lucky enough to rate the big-screen legacy that the tough if benevolent ward-heeler Curley ended up with here. Tracy’s Skeffington is a Catholic prince (and prince of a Catholic), even if his big-stick-right-up-there Brahmin adversaries are ravenous to throw their support behind a transparent dufus in the coming race.

O’Connor’s novel actually coined the term of “last hurrah” — which makes the casting here of so many actors like Pat O’Brien, Wallace Ford, John Carradine, Basil Rathbone, a spectacularly good Edward Brophy, Donald Crisp and four more mouthfuls of their like so aptly poignant. And all of them wearing suits, with the exception of Crisp, who plays the tough but objectively fair Cardinal Burke. This last gets back to why I noted earlier on that this was in some ways an unusual Ford project: You can exhaust a lot of hours looking over his filmography trying to find another contemporary-to-its-time project, much less one that takes place in a major metropolis. And someone enlighten me: is this the only Ford movie that acknowledges the existence of television? Possibly so, I think; I cannot recall what Gideon of Scotland Yard does at home beyond presumably drinking tea.

Not that we get much sense that we’re in a vibrant city, which is one of the movie’s drawbacks; for a film of its ambitions, it’s a little too cramped and possibly on the cheap (though the budget wasn’t puny, and there were all those actors to pay). Julie Kirgo and Lem Dobbs enjoy some spirited back-and-forth on the Twilight Time bonus commentary here: the hall-full glass vs. the half-empty (with colleague Nick Redman wisely electing to relax and mostly just listen to the passing parade). In his biography of Ford, Scott Eyman likens the movie to a fat pitch down the middle that’s manages to get popped up — too harsh, maybe, though this is a movie that’s a little bit less than the sum of its parts (but oh, what parts). I wish it were more expansive; even some of the music, as appropriate and occasionally affecting as it can be, is lifted from the Columbia vaults and the soundtrack to Ford’s The Long Gray Line (talk about a great Twilight Time possibility).

The commentators also give a fairly rough time to Jeffrey Hunter, who, let it be said, was more than respectable in Sergeant Rutledge after having kicked off his three-film relationship with Ford by delivering what I think is one of the era’s really undervalued performances in The Searchers (justly itself, the inflection he puts on Skip to My Lou by is …). I read and loved O’Connor’s novel twice as an early adolescent (but not since) and seem to recall that even as conceived, the nephew Hunter plays is mostly a foil for Skeffington’s quickie graduate course in rough-and-tumble electioneering, which results in a somewhat didactic narrative. Hunter (and Dianne Foster as his wife) aren’t given much to do in the movie, but you have to think that Ford could have given them at least a little more to play with (Hunter does get to carry around a pipe).

But Tracy and his predominantly old-folk supporting players really do shine (all 212 of them or however many there are). I crack up every time the camera captures John Carradine as the cantankerous Yankee newspaper editor Skeffington one-ups in humiliating fashion over the collaborative refusal of the city’s moneyed WASPs to bankroll public works; as I think someone once said of a character played by fellow player Basil Rathbone (also great here), a grapefruit wouldn’t dare squirt in his eye. And the director really must have had some fun decking out Wallace Ford (who had merely played the victim in The Informer) in something close to Buddy Holly glasses, rendering him near-unrecognizable as a fairly friendly political adversary.

This is not, however, totally an exercise in nostalgia. With the Richard Nixon Checkers episode still in recent memory, the movie was savvy enough to envision how media-manufactured personalities eventually would put the end to all the benevolent godfathers who worked the neighborhoods. Elia Kazan’s A Face in the Crowd, which had come out just a year before, still holds the patent on this particular type of screen satire — but with Ronald Reagan and Donald Trump still to come, there was plenty of material to go around in anticipation. The movie is not — or does not choose to be — as savvy with much realization that once the formerly oppressed Irish entered the middle class (and also had official social programs to lend a hand), it was all over for the old school. For his part — and Tracy has dialogue to this effect — Skeffington knows it.

Like most political movies, and especially those of that day, The Last Hurrah lost money; in my hometown, it got booked into the most prestigious of the downtown movie palaces as a solo attraction and just couldn’t fill those seats. And in one of those hopeless lapses in judgment known only to Joan Vohs or whatever folks were placing that year’s ballots for in Academy voting, Tracy did get an Oscar nomination — but for The Old Man and the Sea. Which, by the way, also took home the year’s top honor for scoring in a year when Bernard Herrmann’s mammoth contribution to Vertigo wasn’t even nominated (I could have easily lived with Jerome Moross and The Big Country as a compromise.)

Well, you could spend the entire 121 minutes here just watching Tracy alone and listening to him when he takes his voice down really low with at times a near-mumble. His silver hair and anti-makeup look also cut a striking figure in late-career black-and-white (color, of course, would have destroyed the movie, and I’m talking to YOU, Millennials). As stated before, I wish Charles Lawton Jr.’s camerawork were a little more imaginative, but a lot of the images here are pretty searing on a large home screen, something noticed in particular during the memorable and extended vote-counting scene.