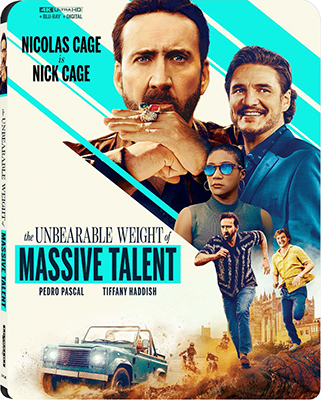 Throughout a four-decade career, the iconic movie star has accumulated an enduring list of memorable roles by stamping each character with his unique blend of quirky charm and searing intensity, be it in comedy, drama or action.

In The Unbearable Weight of Massive Talent, Cage takes on the role he was born to play — himself.

The hugely entertaining film provides a meta commentary on Cage’s career, telling the story of an aging star, haunted by his past successes, who finds himself creatively refueled by the unlikeliest of circumstances.

As Cage proclaims several times in the film, “I’m back. Not that I went anywhere.”

The premise flows primarily from Cage’s public perception the past few years, taking on countless direct-to-video projects to pay off some financial hardships, while his more-eccentric performances became the stuff of meme legend.

Cage himself was unsurprisingly wary of the project, as he notes in the film’s behind-the-scenes materials, until he realized how much fun it could be to portray the younger embodiment of his self-image.

The film finds Cage playing a fictionalized version of himself, vowing to quit Hollywood after losing out on another role he really wanted, and failing to gain the respect of his teenage daughter (one of the main deviations from reality, as real-life Cage has two sons). Cage frequently has visions of his younger self, Nicky (also played by Cage with some de-aging CGI based on his Wild at Heart days), who taunts him for his failures.

Desperate for cash, he accepts a personal appearance gig for $1 million to hang out at a villa in Majorca for a billionaire’s birthday party.

Cage discovers his new patron, Javi (Pedro Pascal) is a huge fan, and the pair grow closer through a shared love of cinema. But it turns out the CIA suspects Javi of being the mastermind of a huge international criminal enterprise, and they recruit Cage with the hopes of using the actor to learn the whereabouts of the kidnapped daughter of a Catalan presidential candidate.

To learn the details, Cage proposes working with Javi on a new screenplay, and at this point Unbearable Weight’s fourth walls all but fold in on themselves as the film channels some of Cage’s quintessential movies and morphs through a variety of genres.

The Blu-ray includes two deleted scenes that total about five minutes. The first is a bit of fluff about Javi’s Wifi password. But the second is practically a short film of its own — a four-minute battle between Cage and Nicky through several Cage films re-created in the style of the 1920 German expressionist film The Cabinet of Dr. Caligari, which is mentioned throughout the movie by Cage as one of his favorite films.

The deleted scenes are available with optional commentary by writer-director Tom Gormican and co-writer Kevin Etten. The pair also provides an informative commentary track for the movie as a whole, usually alternating between stories of Cage’s contributions to the story and how COVID protocols affected the production schedule.

The Blu-ray also offers about a half-hour of behind-the-scenes featurettes. The seven-minute “The Mind” delves into the creative process behind the film; the four-and-a-half-minute “Everybody Needs a Javi” spotlights the creation of Pascal’s character; the seven-minute “Second-Act Action” looks at the film’s action sequences in its latter half; the four-and-a-half-minute “Nick, Nicky and Sergio” deals with Cage portraying three versions of himself, while the five-minute “Glimmers of a Bygone Cage” shows some of the visual effects and film techniques used to create Nicky.

On the humorous side, “Cages 5 and Up” is a two-minute reel of a bunch of kids “auditioning” to play Nic Cage.

Finally, the Blu-ray offers a 16-minute clip from a Q&A of the cast and filmmakers at the SXSW Film Festival, though the discussion mostly veers into feting Cage.