Amazon announced a settlement with Kelly Fitzpatrick and Sabrina Kelly-Krejci, who used TikTok, Instagram, and Facebook to promote and facilitate the sale of counterfeit luxury fashion goods on Amazon, as well as on other online marketplaces.

In the lawsuit, filed in November 2020 in the United States District Court for the Western District of Washington, Amazon showed that the individuals conspired to promote counterfeit luxury brand products on social media video sites and directed customers to product listings on Amazon that evaded counterfeit measures by appearing to be generic, non-infringing products, while the products actually shipped to customers would be the counterfeit items promoted on social media.

As part of the settlement, Fitzpatrick and Kelly-Krejci will make undisclosed settlement payments to Amazon, which will be donated to charities, including the International Trademark Association’s Unreal Campaign, a consumer awareness initiative to educate minor and young adults about the importance of intellectual property rights.

“We are pleased that this settlement has resulted in the individuals recognizing the harm they caused, assistance for our investigation moving forward, and that charities will benefit from the recovered funds,” Kebharu Smith, director of Amazon’s Counterfeit Crimes Unit, said in a statement. “This settlement sends a strong message to would-be bad actors that Amazon will find you and hold you fully accountable.”

In June 2020, Amazon launched its Counterfeit Crimes Unit, and has filed a series of lawsuits against counterfeiters, including joint lawsuits with GoPro, apparel manufacturer HanesBrands, and outdoor products manufacturer YETI.

E-commerce scams remain on the ride. In 2020, only 6% of attempted new seller account registrations passed Amazon’s verification processes and listed products for sale, according to the company. In addition, fewer than 0.01% of all products sold on Amazon received a counterfeit complaint from customers.

New data from Parks Associates found that online video service use jumped to 60% of U.S. broadband homes in September 2020, compared with 50% in July. The trend reverberated across other online activities, including video conferencing, ecommerce, remote working, schooling, and fitness.

The Dallas-based research firm found that 51% of domestic broadband households bought at least one consumer electronics product between February and September 2020, including computing, networking, entertainment, and mobile devices. 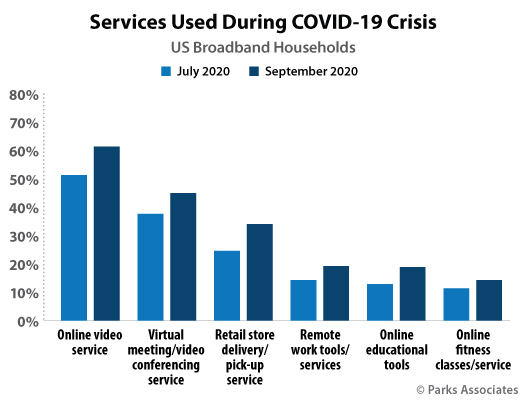 The report found that as of September 2020, 41% of U.S. broadband households, representing 45 million households, were engaged in remote work or remote schooling; 62% of remote workers are using their home broadband more than usual, nearly double the rate of non-remote workers.

This research series leverages Parks’ ongoing consumer surveys of 10,000 broadband households per quarter, as well as targeted surveys of 5,000, to identify trends and deliver ongoing insights into how consumers are responding COVID-19, including the impact to market fundamentals and product purchases, service subscriptions and usage, and home services.

“With record-high unemployment, household spending is primarily on essential goods, as uncertainty about the future remains high,” Elizabeth Parks, president, Parks Associates, said in a statement. “Some technology products are viewed as essential tools. Companies have changed how they interact with their customers — leveraging e-commerce channels, offering new curbside pick-up and delivery options, and providing remote rather than in-home technical support services.”

Key findings include that overall churn rate for OTT services dropped to 38%, down from 46% a year ago. COVID-19 prompted roughly 33% of security system owners and intenders to avoid professional installers; 24% of households with fixed broadband service reported being likely to upgrade in the next six months.

About 60% of pay-TV subscribers are interested in content from an online video service as part of their pay-TV subscription. Use of telehealth services jumped from 15% in 2Q 2019 to 41% in 2Q 2020.