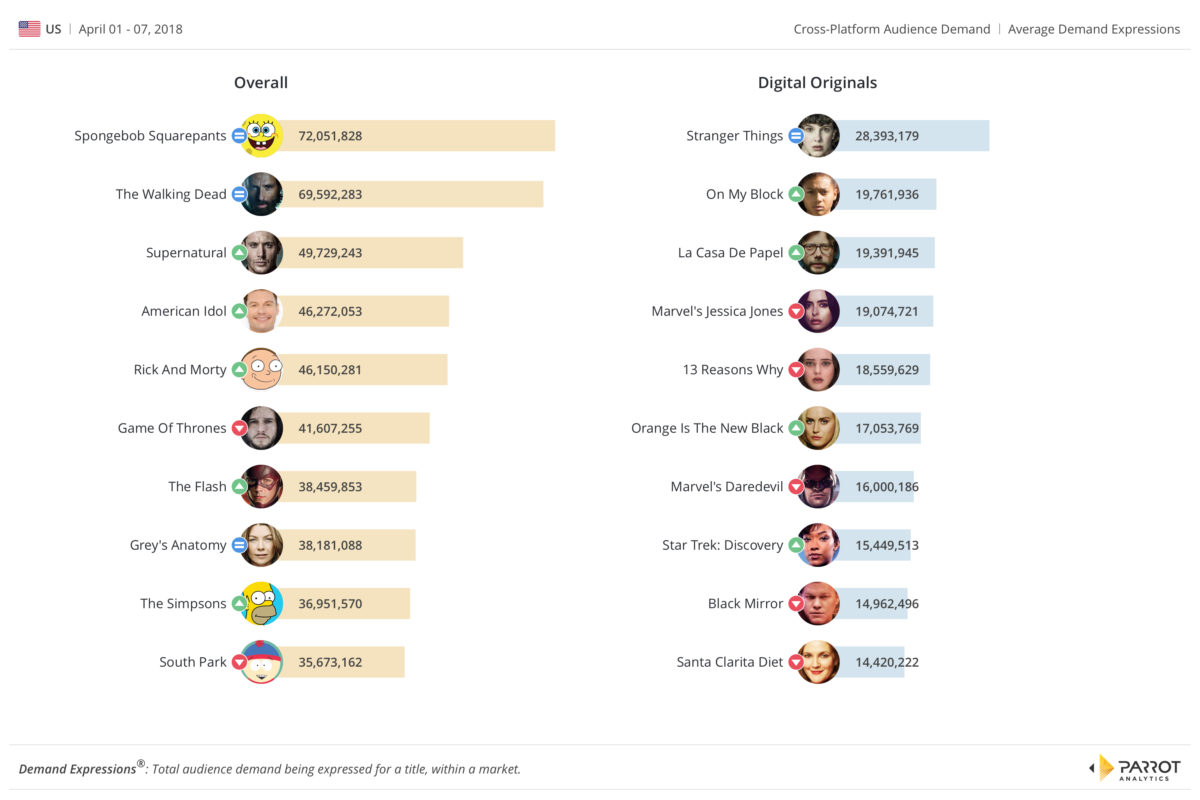 Netflix’s “Stranger Things” solidified its hold on the No. 1 spot on the top 10 digital originals chart for the week ended April 7, with a nearly 7.3% spike in demand, according to Parrot Analytics’ Demand Expressions data.

The coming-of-age series was created by Lauren Lungerich,  Eddie Gonzalez, and Jeremy Haft. The first season, with 10 episodes, debuted on Netflix on March 16.

The series has been hailed by critics and fans alike for its storylines, acting and cast, featuring young black and Latino actors such as Sierra Capri, Jason Genao, Brett Gray, Diego Tinoco, Ronni Hawk, and Jessica Marie Garcia.

Starting with “13 Reasons Why” a year ago, Netflix has made a conscious attempt to reach teens and young adults with a string of new series.  Last fall, the streaming service released the second season of “Stranger Things” and continued this year with high-profile additions like “The End of the F…ing World,”  “Everything Sucks” and “On My Block.”

“On My Block” and “Alexa & Katie” (No. 40 on the digital originals chart the week ended April 7), in particular, represent Netflix’s ambition to dominate the sanitized teenage television category with realistic and heartfelt dramas.

New to the top 10 digital originals chart is the Spanish limited series “Money Heist” (“La Casa De Papel”), which bowed at No. 3.  Netflix bought global distribution rights to the heist drama earlier this year and re-edited the original run of nine episodes into 15 different untitled episodes, released as two seasons. Netflix released the second season on April 6 with a runtime of 40 to 50 minutes instead of the original 70 minutes per episode.

The top of the overall TV series chart remains mostly unchanged from the prior week, with “Spongebob Squarepants” and “The Walking Dead” still perched at No. 1 and No. 2, respectively (although “Spongebob” experienced a 9% drop in demand).