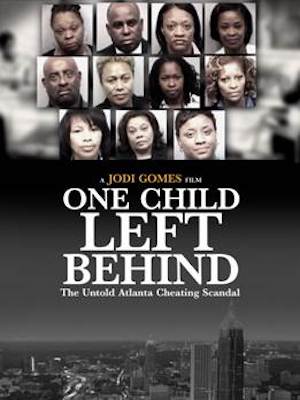 This documentary uncovers the race, class and political forces behind an educational scandal in Atlanta that many of us may remember, but probably did not fully understand.

In 2009, 1,176 Atlanta teachers were investigated for test cheating; 35 were indicted, 12 went to trial and 11 were found guilty on RICO charges, which are typically reserved for the mafia and drug lords. The guilty, serving 30-year sentences, break their silence in this film that uncovers the more complicated story of what happened. It takes a closer look at the legislation called No Child Left Behind, the politics behind it, and a race and power struggle that forced schools to face sometimes insurmountable challenges. Pressure on schools to solve complicated problems of social inequality came to a head in the No Child policy, which punished teachers, administrators and school districts for meeting performance metrics that weren’t entirely within their control.

That’s not to say the film whitewashes misbehavior; it just puts it in context.

Director Jodi Gomes brings the accused, the whistleblowers, the cheaters and the innocent together to shed light on the forces at work in education. Viewers will leave the film wondering if guilt had been properly assigned.