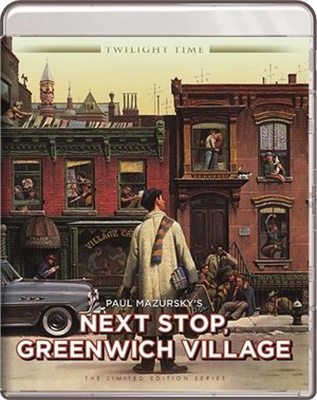 Available via ScreenArchives.com
Twilight Time, Drama, $29.95 Blu-ray, ‘R.’
Stars Lenny Baker, Ellen Greene, Christopher Walken, Lois Smith.
1976. Blume in Love has always been my favorite achievement from writer-director Paul Mazursky’s treasured output spanning (mostly but not exclusively) 1969 to 1978. But after seeing Next Stop, Greenwich Village for the first time in decades via this new Twilight Time release, it may have some competition.
Extras: Star Ellen Greene and director Paul Mazursky both praise Shelley Winters to the sky here in a voiceover commentary from a previous release. Mazursky died in 2014, which points up the timeless value of home-release commentaries in general for all your streamer/pretenders out there.
Read the Full Review