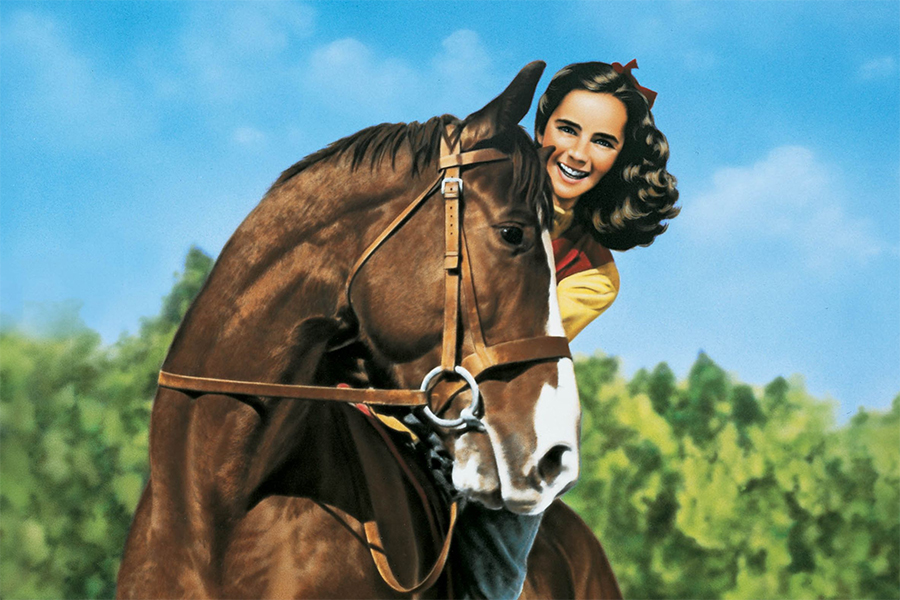 National Velvet arrives on Blu-ray Nov. 16 with a new 4K scan from the original Technicolor negatives. The 1944 film stars a 12-year-old Elizabeth Taylor in her first major role as Velvet Brown, a wide-eyed adolescent who, assisted by her jockey pal (Mickey Rooney), trains Pie, a horse she won in a raffle, for the Grand National Steeplechase. She then poses as a boy to ride in the race. MGM was so impressed with their young new star’s work on the film that the studio gave the horse to Taylor after filming completed. Directed by Clarence Brown, National Velvet won two Oscars — Best Film Editing, and Best Supporting Actress for Anne Revere as Velvet’s mother. The cast also includes Donald Crisp and a young Angela Lansbury and veteran. The Blu-ray includes mono audio and the film’s theatrical trailer.

Arriving Nov. 23 on Blu-ray Disc is 1944’s The Thin Man Goes Home, the fifth of six films starring William Powell and Myrna Loy as amateur sleuths Nick and Nora Charles. The latest sequel in the series of mystery comedies that began with 1934’s The Thin Man finds the couple visiting Nick’s parents (Harry Davenport and Lucile Watson) when confronted with the case of a murdered artist. The cast also includes Gloria De Haven and Anne Revere. The Blu-ray includes a new 4K scan, mono audio, the short “Why, Daddy?” from Robert Benchley, the Tex Avery cartoon “Screwball Squirrel,” and the original theatrical trailer.

Warner Archive Nov. 9 releases 1936’s Fury on Blu-ray with a new 4K scan. The film stars Spencer Tracy as Joe Wilson, a wrongly jailed man thought to have died in a blaze started by a bloodthirsty lynch mob. Having survived the fire, Joe aims to ensure his would-be executioners meet the fate he miraculously escaped. Sylvia Sidney plays his bride-to-be. In his first American film, German director Fritz Lang (Metropolis) combines a passion for justice and a sharp visual style into a landmark of social-conscience filmmaking with its searing indictment of mob justice and lynching. The Blu-ray includes mono audio, commentary by Peter Bogdanovich with archival interview comments from Lang, and a theatrical trailer.

Also due Nov. 9 on Blu-ray is 1973’s The Last of Sheila, starring James Coburn, Raquel Welch, Richard Benjamin, Joan Hackett, James Mason, Dyan Cannon and Ian McShane. Composer Stephen Sondheim and actor Anthony Perkins wrote this witty, complex thriller directed by Herbert Ross. A movie kingpin (Coburn), whose wife, Sheila, was killed by a hit-and-run driver a year before, hosts a cruise aboard his sleek yacht. His guests are all friends (and some lovers) who may know more about Sheila’s death than they’re letting on. An elaborate murder game with Mediterranean ports of call is the itinerary. The Blu-ray includes a new 4K scan from the original negative, a widescreen presentation, mono audio, the theatrical trailer, and commentary by Benjamin, Cannon and Welch.

Another Nov. 9 Blu-ray release is 1933’s Ladies They Talk About, featuring a new 1080p master from a 4K scan of the original nitrate camera negative. A prime example of the raw and racy films made before the enforcement of Hollywood’s repressive “production code,” this Warner Bros. title previously released in the “Forbidden Hollywood” series stars Barbara Stanwyck as Nan Taylor, a bank robber serving a prison sentence whose partners are killed in a jailbreak attempt. David Slade (Preston S. Foster) is the reformer who has fallen in love with her. Nan thinks David is the one responsible for tipping off the authorities, but she soon learns to trust in his love for her, eventually reciprocating and leaving her unsavory past behind. Co-directed by William Keighley and Howard Bretherton, and based on the play by Dorothy Mackaye and Carlton Miles, Ladies They Talk About also stars Lyle Talbot, Lillian Roth and Allen Jenkins. The Blu-ray includes mono audio, a theatrical trailer, the vintage 1933 WB cartoon I Like Mountain Music and the vintage 1933 WB short Pure Feud.

Arriving Nov. 16 on Blu-ray is 1958’s Some Came Running, featuring a new 4K scan of the original camera negative. After a round of partying he can’t remember, World War II veteran Dave Hirsh (Frank Sinatra) finds himself on a bus to his hometown of Parkman, Indiana, which he hasn’t visited in more than a decade. His arrival brings small-town hypocrisy to the unforgiving light of day in this character-driven tale directed by Vincente Minnelli and based on a novel by James Jones (whose From Here to Eternity led to Sinatra’s 1953 Oscar). In his first screen pairing with Sinatra, Dean Martin plays a sharp-witted card sharp. And Shirley MacLaine earned one of the movie’s five Academy Award nominations as the good-hearted floozy with a potentially fatal attraction to Hirsh. The Blu-ray includes a 2.35:1 letterbox presentation with mono audio, the film’s original theatrical trailer in HD, and the featurette “The Story of Some Came Running.”

Nov. 23 will see the release of the 1951 musical Lullaby of Broadway on Blu-ray with a new HD master in a 1.37:1 presentation with mono audio. Doris Day stars as a singer newly arrived in New York and destined for Great White Way fame in the capable company of costars Gene Nelson, S.Z. Sakall, Billy De Wolfe, Gladys George and Florence Bates. The film gave Day a chance to not just vocalize with her usual excellence, but to also show off her impressive dancing talents — a daunting prospect for the star, who was told that injuries suffered during a car accident in her youth would prevent her from becoming a dancer. Songs include the Oscar-winning title tune, Cole Porter’s “Just One of Those Things” and “Somebody Loves Me.” The Blu-ray also includes the film’s theatrical trailer.

Available on Blu-ray Nov. 30 will be 1958’s Party Girl. When maverick director Nicholas Ray (Johnny Guitar, Rebel Without a Cause) turns his talents to a gangster movie, a familiar genre becomes startling and new. Under the auspices of long-time MGM musical producer Joe Pasternak, and with the added gloss of the CinemaScope widescreen and Metrocolor, the auteur created a cult classic. Set in 1930s Chicago, Party Girl follows a bum-legged mouthpiece for the mob (Robert Taylor) and a gorgeous, wised-up vamp (Cyd Charisse) who fall in love, try to go straight, and head straight for trouble. The cast also includes Lee J. Cobb and John Ireland. The Blu-ray includes a 2.35:1 letterbox presentation with mono audio, plus the film’s theatrical trailer.

Warner Archive titles are available at its Amazon Store and other online retailers of Blu-ray Discs and DVDs.