The trade group in an April 15 news release cited data from an Ernst & Young study it commissioned that examines the effect of the length of the theatrical window on revenues in the home, in theaters, and overall.

The study found that a 1% longer window between a film’s theatrical opening and its availability for home viewing could boost home video sales by $56,000.

The study comes as studios have been accelerating the home release of films to counter movie theater closures due to the coronavirus pandemic. The most pronounced example was Trolls World Tour, which was released digitally at a premium “rental” price of $19.99 the same day it was supposed to open in theaters.

NATO warned that such early release patterns should be temporary, until the pandemic subsides and theaters reopen, lest studios leave money on the table.

“With movie theaters shut down due to the COVID-19 pandemic, studios have accelerated home release for some titles that were already in theatrical release when the industry shut down,” NATO said in the press release. “Without theaters available, the release window was temporarily irrelevant for those movies. These unique circumstances, however, do not signal a change to the theatrical release model.” 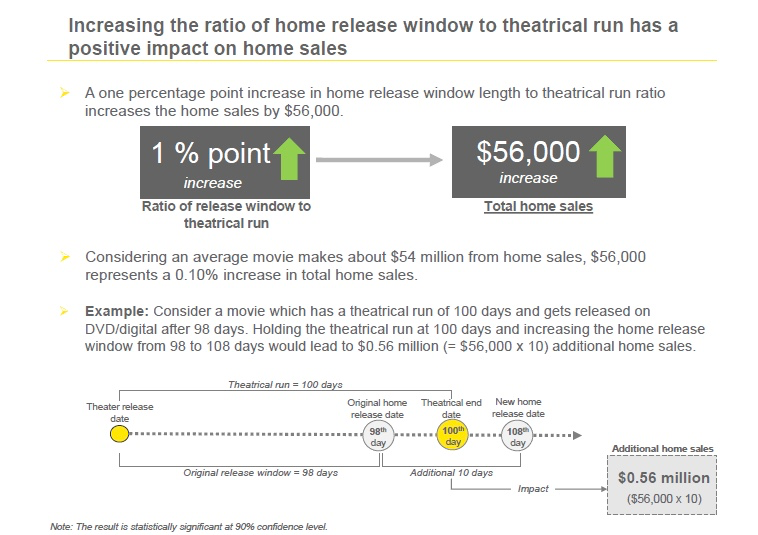 NATO noted that three films unreleased at the time of the shutdown were released digitally, directly to home audiences. “Yet the vast majority of theatrical releases scheduled from March through June have been rescheduled for theatrical release — 37 of them, with six more delayed with no set release date — rather than rushed to the home,” NATO said. “Studios clearly believe it is in their financial interest to have exclusive theatrical releases.”

NATO said the findings of the new Ernst & Young study “are significant, as shrinking revenues in the home have put pressure on distributors to find a way to boost the fortunes of a home segment in secular decline. Shrinking the length of the theatrical release window has been the mechanism most often cited as a means to that end. This study finds that shorter release windows not only damage theatrical revenues — as expected — they damage home revenues as well.”

NATO said the study also finds that “without controlling for the influence of other variables, the length of theatrical run is more highly correlated to home sales than to box office sales.”

Total home video transactional revenue slipped 30% between 2012 and 2017, the period of the study, NATO said, citing DEG: The Digital Entertainment Group numbers. “The study finds the average percentage of transactional home revenue to total combined home and theatrical revenue per movie has declined even more — 32% — from 40% to 27% over the same period,” NATO said.

Theater owners on March 17 took a swipe at plans by some studios to bypass the traditional theatrical release window and make new films immediately available for home viewing as a means of contending with the closure of theaters amid the coronavirus pandemic.

The National Association of Theatre Owners (NATO) issued a statement blasting the practice, although the group was careful not to blame the studios but, rather, “speculation in the media that the temporary closure of theaters will lead to accelerated or exclusive releases of theatrical titles to home streaming.”

“Such speculation ignores the underlying financial logic of studio investment in theatrical titles,” the NATO statement said. “To avoid catastrophic losses to the studios, these titles must have the fullest possible theatrical release around the world.

“While one or two releases may forgo theatrical release, it is our understanding from discussions with distributors that the vast majority of deferred releases will be rescheduled for theatrical release as life returns to normal. When those titles are rescheduled, they will make for an even fuller slate of offerings than normal as they are slotted into an already robust release schedule later in the year.”

Universal Pictures on March 16 announced the immediate release of its current theatrical slate into home entertainment distribution channels, at a premium price of just under $20. Movies include The Invisible Man, The Hunt and Emma, among others.

The DreamWorks Animation Trolls sequel Trolls World Tour, distributed by Universal Pictures, will now hit theatrical and home entertainment channels on April 10. Titles will be available on assorted digital channels for a 48-hour rental period at $19.99 each.

A day later, on March 17, Variety reported that Warner Bros. is prepping the early (March 24) transactional video-on-demand release of Harley Quinn: Birds of Prey, featuring Margot Robbie as the DC Comics antihero. The film was released theatrically less than two months ago.

The NATO statement noted that “as the virus takes hold in different regions at different times and in varying degrees of severity, people and public health officials are grappling with decisions about when to close public-facing businesses and when to restrict personal activity. As with other businesses that serve large groups of people, movie theaters have faced voluntary and mandated restrictions and closures. The majority of movie theaters have now closed.

“This industry will continue to meet its responsibilities to the public and will abide by public health mandates and adapt to local conditions. Our partners in movie distribution have postponed major new releases in response to the Coronavirus situation in markets around the world. Other titles beyond the immediate horizon have not changed their release dates.”