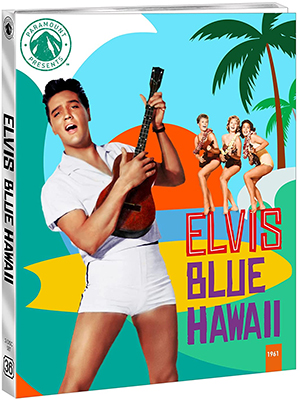 Why did they call it Blue Hawaii? It blew in Hawaii, it blew in Akron, it blew in Pacoima, it blew in Delaware, everywhere it opened it blew. Chicago radio legend Steve Dahl deserves credit for the line, but the joke is decidedly on us. It should come as no great shock that the Presley pictures to best withstand the test of time — Michael Curtiz’s King Creole, Don Siegel’s Flaming Star, and Phil Karlson’s Kid Galahad — reflect three rare occasions in the King’s career where he teamed with directors capable of producing something more than a camera nailed to the floor drearily canning his lip-synched pursuits. (I’m a fan of Gordon Douglas and George Marshall, but Follow That Dream and Viva Las Vegas are a safe distance from both directors’ pantheons.) Blue Hawaii, Elvis’ eighth vehicle, was such a box office smash that it became standard boilerplate stuff for Col. Tom Parker, a formula for box office gold he applied to every campy money-grab that followed.

Parker’s model for success was just slightly more sophisticated than the rudimentary stories he personally selected for his star. A glamorous and/or one-of-a-kind location (Acapulco, the World’s Fair, Las Vegas) was a must. His client needed as many interchangeable, scantily clad starlets as possible to act as eyeball massaging props. The soundtrack was to be padded with enough numbers to guarantee LP sales. With 15 tunes, Blue Hawaii more than tripled the number of songs found in his previous pictures. The album topped the charts for 20 consecutive weeks, but one would still be loath to call it a musical. At 102 minutes it plays like a series of songs occasionally interrupted by patches of dialog.

What little story there is involves Chad Gates (Presley), a soldier in peacetime back from serving a 2-year stint with Uncle Sam. His ditzy Dixie Belle mother Sara Lee (Angela Lansbury) half wishes her boy was doing something constructive like bayonetting the enemy in combat rather than twiddling his thumbs on a military base. It’s her calling to see to it that Chad rubs elbows with the finer elements on the island. In his parents’ eyes, Chad’s future is a lifetime sentence in the family’s lucrative fruit company. The fiercely independent-minded Chad wants nothing to do with nepotism, refusing to be known as the boss’s son. And if mom has any say in it, the future Mrs. Chad Gates will be a wealthy socialite, not Maile (Joan Blackman), Chad’s pre-service gal pal he spent 5 days shacking up with before having the nerve to face his mother’s suffocating, borderline-incestuous embrace. She’s the kind of mom capable of putting a son off his appetite, particularly with her constant demands for “sugar” kisses from her boy.

You’ve heard of the Lubitsch Touch? How about a Taurog Slog? Norman Taurog signed nine Elvis vehicles. As a director, he made a great yes man, quick to move on the Colonel’s every wish. With almost 200 shorts and features to his credit, Taurog’s childish way with child actors (Boys Town, Young Tom Edison, Room for One More) must have triggered something in Parker that made him the perfect man for the job of Elvis wrangler. Taurog was Jackie Cooper’s uncle and together they teamed on Skippy, a maudlin tale of a boy trying to save his pet pooch from the dog catcher that earned the director an Oscar. (Allow me a moment to point out that Hitchcock and Welles never took home a competitive Academy doorprize, but Elvis’ director of choice did.)

Presley had style, a killer grin, charm to spare and enough rock-a-hula, baby in his hips to set an audience’s feet tapping. But on his best day, movie star Elvis couldn’t get arrested as an actor due in large part to the Colonel’s refusal to allow the King to stretch. Poor little rich kid Chad sets his bar low with a future in tourism, guiding deep-pocketed vacationers through the Islands. Elvis’ brightest moment entails a job interview with his future boss Mr. Chapman, played with customary discombobulated aplomb by Howard McNear. (You probably know him better as Floyd Lawson, Mayberry’s No. 1 barber.) Elvis’ reactions to McNear’s addlebrained state and back-tracking stammer are genuine enough to give the scene a playful bounce. McNear returns for one more spirited exchange of malapropos before it’s over and in each instance leaves the audience longing for more.

There’s double entendre to spare when Abigail Prentice (Nancy Walters), Chad’s first client, asks if he can satisfy a high school teacher and four underage students. (These gals may be underage and oversexed, but by his own admission, Chad’s no cradle robber.) There’s bookish Beverly (Christian Kay), the adorably immature Sandy (Pamela Austin), a nondescript Patsy (Darlene Thomkins), and Ellie (Jenny Maxwell), the cigarette smoking, hot-to-trot minor spurned by Chad. She’s also the one voted most likely to pull a Norman Maine at the end of A Star is Born. (The only member of the group not to show up in Chad’s bedroom before the final fade is Beverly. And not one of the girls seems bothered over finding their teacher in Chad’s room.) Don’t worry about Ellie’s suicidal bringdown hampering the fun. Her cry for help becomes a punchline with Chad bending the girl over his knee for a “This’ll hurt me more than it will you” spanking. In no time, she’s back on a Paramount soundstage seated before a rear screen projector pretending she’s on location listening to Chad croon.

While on the subject of process shots, Elvis was so famous that filming on location became a practical impossibility. Paramount’s process photography wizard Farciot Eduoart deserves to share a co-director’s credit with Taurog. See: Elvis picnic before a rear screen. Watch: Elvis take a romantic drive without ever leaving the studio! Enthrall: As Elvis leads the girls on a musical tour of the process photography lab! When it came time to sing, Elvis didn’t like to leave the studio. This became laughingly apparent as time went on, with Elvis relying heavily on green screen and an occasional body double filmed in long shot.

Finally, what would an Elvis picture be without a violent exchange? This one’s a politically incorrect doozy. Chad and the girls relax at a late-night watering hole where his buddy’s band performs. In walk a blowsy Enid Garvey (Iris Adrian) with Tucker (Steve Brodie), her inebriated hubby in tow, eager to pounce on the young meat. Enid thinks nothing of Tucker openly slobbering over a juvenile. Patsy sticks a fork in Tucker’s hand, but this turkey’s not done by a longshot. Apparently neither are the censors who thought nothing of including a knock-down, drag-out fistfight in a film otherwise geared for families. It isn’t enough for Presley’s ego to enrapture every female in the cast, he does so in part by proving that fisticuffs make the man.

This appears to be the first Elvis picture to be given a 4K sprucing up. Why Blue Hawaii and not Jailhouse Rock or Viva Las Vegas? Refusing to knock success, Paramount chose this, Elvis’ biggest earner, to kick things off. Normally, I’m the first to observe that the movie in question hasn’t looked this good since its initial release. I’ll watch anything in dye-transfer Technicolor and that includes Elvis. When a friend back home invited me to check out his 35mm print, he didn’t have to ask twice. I have yet to see a digital transfer that comes close to capturing the lush radiance of imbibition Technicolor, but this comes close. Photographed by Paramount veteran of 20 years, Charles Lang, it’s about as pretty an Elvis feature as any filmed. The tropical vistas and nightwork are spectacular, and in spite of Taurog’s lackluster performance in the director’s chair, his cinematographer’s dedication to a near close-up-free Panavision frame is awe-inspiring. Special features include the trailer, a photo gallery and insight into Presley’s place in movie history courtesy of Jim Niebaur’s audio commentary.