On the heels of Netflix raising the monthly price for its standard plan to $15.50, new data from researcher Morning Consult finds that the average U.S. streamer is comfortable paying only around $12 monthly for service. That’s about $3 less than the monthly fee for HBO Max, but above the fees charged by Disney+, among others.

Citing a Jan. 28-31 survey of 2,210 U.S. adults, the report found that respondents also considered the optimal price for ad-supported VOD services such as Hulu, Paramount+, Discovery+ and Peacock to be around $10. 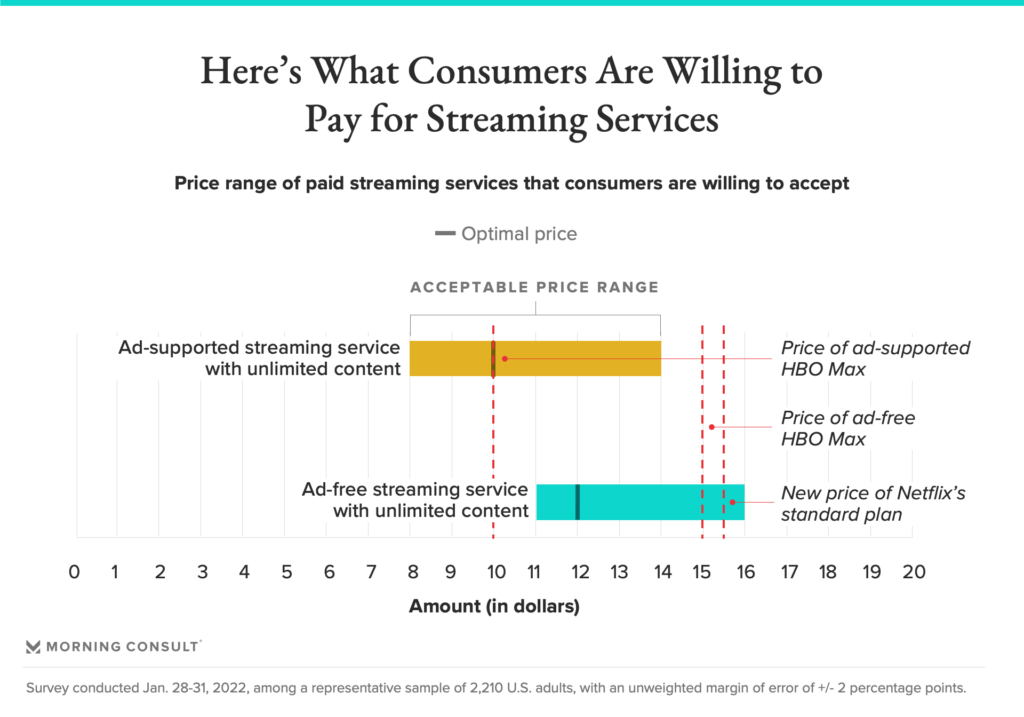 Respondents’ acceptable price range for streaming services showed slight movement from a similar 2019 survey. The report found that the bottom of the price range for ad-free services increased by a dollar to $11-$16, while consumers’ preferred range for ad-supported services grew to $8-$14. Netflix’s new $15.50 standard plan is only 50 cents below what Americans said is the highest acceptable price for an ad-free streaming service.

“Netflix and HBO Max are quickly approaching the top of consumers’ preferred price range, while others such as Disney+ and Apple TV+ still have room to go higher,” report author Sarah Shevenock wrote in a note. “Given that consumers haven’t fundamentally changed their minds in the last three years about how much a service should cost, additional increases could spur consumers to reconsider the number of subscriptions they can afford. It is a delicate game of which companies such as Netflix are well aware, but for now, they think the added revenue is worth the risk of losing some subscribers.” 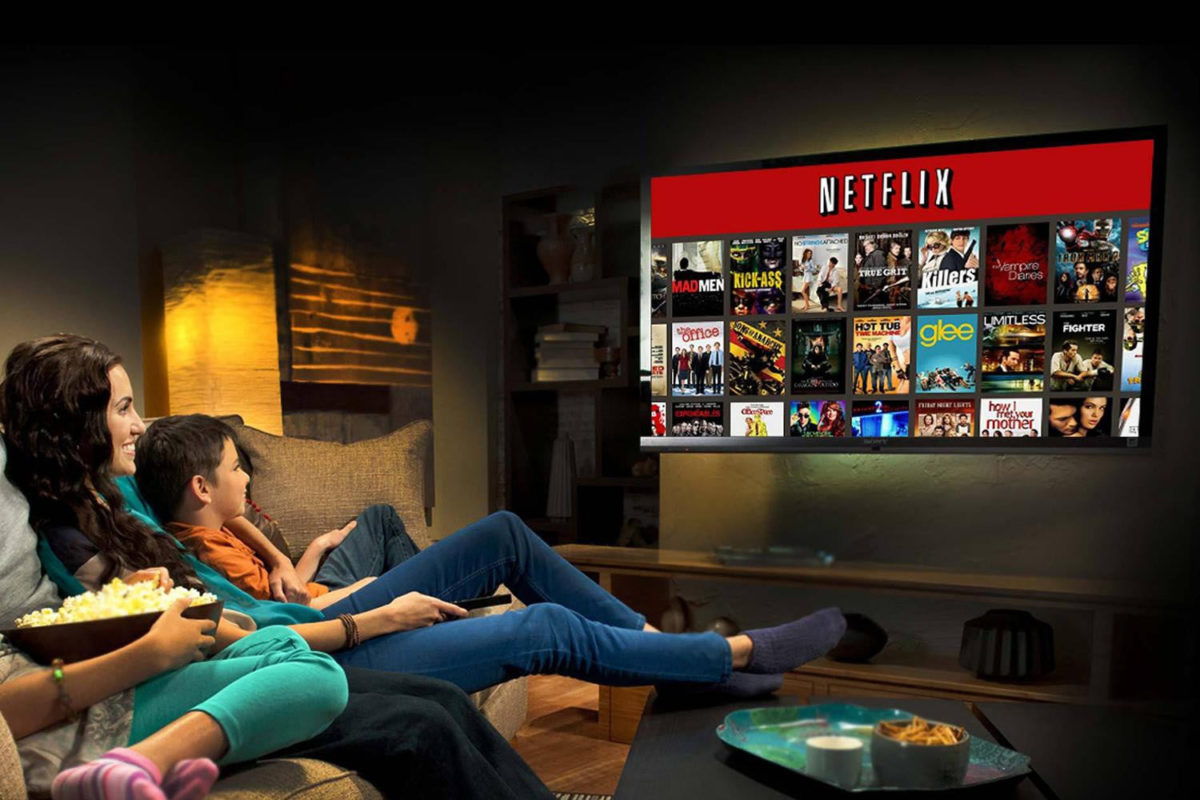 With more than 130 million subscribers globally, including about 57 million in the United States, Netflix’s appeal would appear to supersede conventional marketing.

Indeed, a new report from tech data firm Morning Consult found Netflix bested other brands when it came to who survey respondents were most-likely to recommend to others. Overall, 74% of adults said they would be very likely to recommend the streaming service.

Separately, Amazon, for the second year, rated the most-loved brand with a 78.7% favorable rating nationwide. Walmart finished as the brand most respondents (69%) said they were likely to purchase from.

The results are based on 1.5 million domestic survey interviews conducted from the first quarter through early Q4, featuring from 5,000 to 10,000 consumers 18+ queried daily. 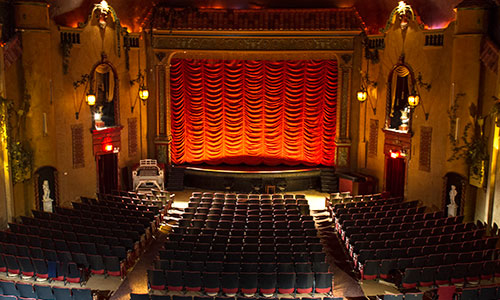 The survey conducted Oct. 11-14 among 2,201 adults from Morning Consult and commissioned by The Hollywood Reporter, found respondents would pay upwards of $22 monthly to watch three theatrical screenings monthly. 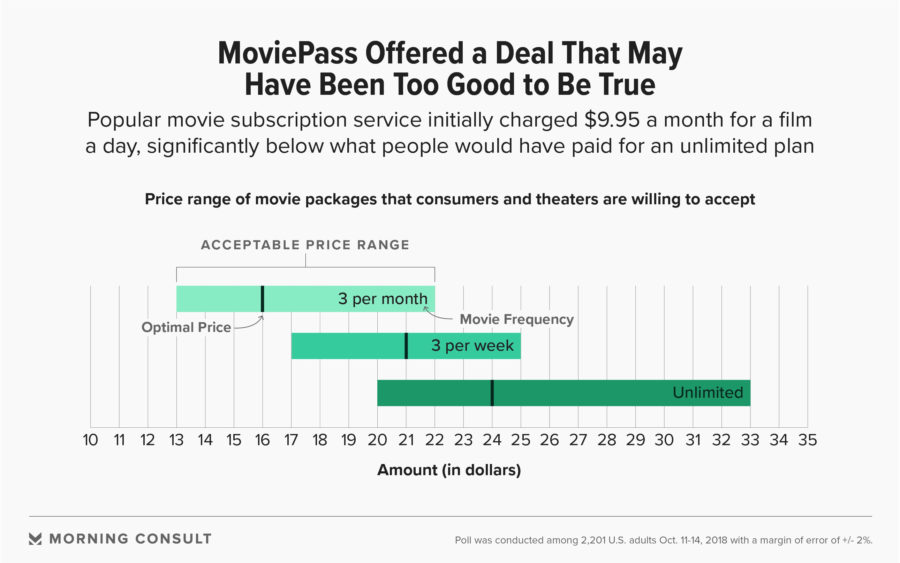 Respondents said they would also pay $25 to see three movies per week, and $33 for unlimited screenings.

MoviePass set the exhibition industry on its ear last year when it launched service offering subscribers daily access to a theatrical screening for less than $10 per month. With the service paying exhibitors such as AMC Theatres and Regal Cinema face value for each ticket consumed by subscribers, fiscal losses began to spiral out of control.

Millennials are the most likely to purchase a ticket subscription.

According to the survey, perks that would incentivize consumers to use a subscription service include: unused tickets rolling over to the next month (22%); ability to choose from a variety of plans/theaters (19%); the number of movies included (15%); and the ability to use subscription tickets to bring friends (25%).