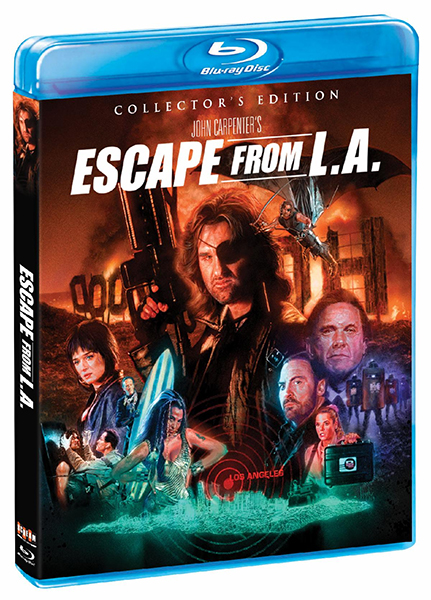 Nowadays, a character such as Kurt Russell’s Snake Plissken would be tagged for franchise potential and, if his first outing shows a modicum of success, thrust into a series of sequels (e.g. John Wick). But fans of 1981’s Escape From New York had to wait 15 years before director John Carpenter would bring the character back to the big screen.

Such a gap between sequels might not seem like such a big deal anymore, with studios frequently greenlighting follow-ups to popular movies from 20 to 30 years ago, or longer (case in point, the upcoming Top Gun: Maverick getting made 34 years after the original).

Carpenter and Russell certainly didn’t end their creative partnership following Escape From New York, collaborating on other cult classics such as 1982’s The Thing and 1986’s Big Trouble in Little China (both receiving their own Scream Factory special-edition Blu-rays).

The delay in getting a Plissken sequel off the ground wasn’t for lack of trying. Russell reportedly wanted to play the character again, and a script had been in development since the mid 1980s. The project suffered additional setbacks after the original film’s distributor went bankrupt and rights to the sequel bounced around, eventually ending up with Paramount. (Distribution rights for the original film ended up with MGM, making a DVD bundle of the two films problematic —though perhaps Shout! Factory can remedy that now that it has been able to release both films on separate Blu-rays).

The film finally hit theaters in 1996, just a year before the “futuristic” setting of the original film, in which Snake had to rescue the U.S. president from the island of Manhattan, which had been turned into a lawless maximum security prison.

The sequel takes the obvious approach to a follow-up to a movie called Escape From New York, and transfers the setting to Los Angeles. Aside from that, the film is essentially a beat-for-beat remake of the first film, with a few details mixed around for good measure. Most of the new characters Plissken meets correspond to characters from the first movie, from the head of the police force that recruits him for an impossible mission, to the leader of the gangs on the prison island where he’s sent.

In the years since Snake’s first escape, a massive earthquake strikes California in the year 2000, causing the greater Los Angeles area to break off from the mainland. A presidential candidate (Cliff Robertson) who happened to predict the disaster is subsequently swept into office, and he oversees a series of Constitutional amendments, including one giving him a lifetime term. He outlaws all religions but Christianity, and anyone who violates the new U.S. moral code is deported to the island of Los Angeles, which is monitored by a national police force.

In 2013, however, the president’s daughter (A.J. Langer) falls in love with a revolutionary, steals a top-secret weapons control system, and exiles herself to the island. When the rescue team fails to find her, the president recruits Plissken, who has experience with this sort of thing (even eliciting a comment from Snake about how familiar it all is).

Plissken has a day to infiltrate the island and recover the weapons system, which is apparently America’s only defense against an imminent invasion from the rest of the world the president has managed to tick off. The invasion will be led by Che Guevara wannabe Cuervo Jones (Georges Corraface), who now possesses the weapon thanks to the First Daughter, and plans to use it against the U.S.

So, as with New York, Snake must navigate a series of unsavory characters and dangerous situations to recover the items of national importance and return to the authorities for the cure to the deadly ailment they secretly gave him to motivate him to go on the mission.

Where Escape From New York mostly treats its setting as a generic burned-out urban sprawl, Escape From L.A. puts more emphasis on re-creating the dystopian version of specific recognizable Los Angeles landmarks, and revels in extrapolating a lawless world from a number of L.A. tropes, from a gang of mutant plastic surgeon victims led by a doctor (Bruce Campbell) trying to keep them fresh, to the aging surfer (Peter Fonda) who helps Snake get around town by riding the waves.

And in one of the film’s best gags, a character implies that Disney has somehow gone bankrupt by 2013. In the real timeline, that would have been a year after they bought Lucasfilm.

Escape from L.A. plays a bit like what Carpenter would have done with the first movie if he had an actual budget to work with. Where the first film felt gritty and was quite effective in making the most out of its limited resources, the sequel seems a bit too polished. The film makes extensive use of computer animation for its visual effects, but they haven’t aged well, looking more like video game graphics than anything that exists in the real world.

Still, its fun to get a sense of the future version of L.A. that Carpenter was going for. The Blu-ray features a new 4K scan of the original negative that makes it easy to enjoy the film’s production design, even if it doesn’t do many favors for the visual effects.

Where the previous Paramount Blu-ray of the film offered no bonus materials, the new single-disc Scream Factory edition presents more than an hour’s worth of newly recorded interviews with some of the cast and filmmakers. They are presented as six separate videos, one for each subject.

Among the actors showcased here are Stacy Keach, who plays the police commander, and Peter Jason, who plays another police official, in addition to Campbell and Corraface. The behind-the-scenes guys include special effects artist Jim McPherson and visual effects artist David Jones. The discussions don’t always stick to Escape From L.A. as the topic and hand and at times veer into the subjects’ careers in general.

Rounding out the package are the trailer, TV spots and a still gallery. While a better offering than the original Blu-ray, it’s a far cry from the two-disc Escape From New York collection that included several audio commentaries and deleted scenes in addition to behind-the-scenes interviews.

Carpenter and Russell reportedly had additional sequels planned, but the underwhelming critical and box office response to Escape From L.A. put an end to that. One potential sequel supposedly ended up being turned into Carpenter’s Ghosts of Mars.