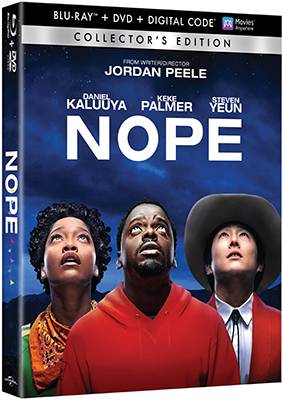 Comedian-turned-auteur Jordan Peele’s latest foray into metaphorical horror blends sci-fi and Western elements into an engrossing tale of a UFO plaguing a ranch on the fringes of Hollywood.

Daniel Kaluuya and Keke Palmer star as OJ and Em Haywood, whose family business provides horses for use in Hollywood productions. After the death of their father months earlier due to mysterious debris falling from the sky, the Haywood ranch has been facing financial difficulties, forcing OJ to sell horses to a local Western-themed amusement park owned by former child star Jupe (Steven Yeun), whose biggest claim to fame was appearing on 1990s sitcom that was canceled after its chimpanzee star went on a rampage, destroyed the set and injured several members of the cast.

As the Haywoods struggle to reverse their fortunes, they discover what seems to be a flying saucer that neutralizes electricity when it flies by, often flying low to the ground and consuming everything in sight, horses and people included. Realizing that proof of UFOs could provide the windfall they need, they plot to photograph it by setting up a series of cameras in such a way that not all of them would be fritzed off by the UFO at the same time.

Joined by a local electronics store clerk (Brandon Perea) motivated by curiosity to assist their efforts, they soon start to understand the nature of the mysterious visitor and its role in their father’s death and family’s plight.

A discussion in the Blu-ray bonus materials labels the film as a combination of Close Encounters and Jaws, which is an apt description given the prevalence of Spielbergian overtones throughout the film. Writer-director Peele himself calls the film a tribute to the oft-overlooked artisans of Hollywood, while also serving as an examination of exploitation and humanity’s addiction to spectacle. The prominent motif in this regard is reflected in the film’s depiction of attempts to placate wild animals for entertainment purposes. Even the horses, long considered a tame companion in mankind’s spread of civilization, can abandon their training and prove dangerous when startled.

Peele’s skill at layering tension draws the audience into the mystery of the flying object alongside the Haywoods, while brilliant sound design and fantastic cinematography enhance the unsettling mood.

The making of the film is covered in great detail in the hour-long “Shadows: The Making of Nope” documentary included with the Blu-ray. Supplemental featurettes include “Call Him Jean Jacket,” a nearly 15-minute piece about the design and symbolism of the UFO; and the five-and-a-half-minute “Mystery Man of Muybridge,” an examination of the historical reel of a jockey riding a horse that is one of the earliest examples of the potential of film and is one of the central influences of Nope.

Also included is a five-and-a-half-minute gag reel, and five deleted scenes that run a total of nine-and-a-half minutes, though some are more akin to extended sequences with unfinished visual effects.