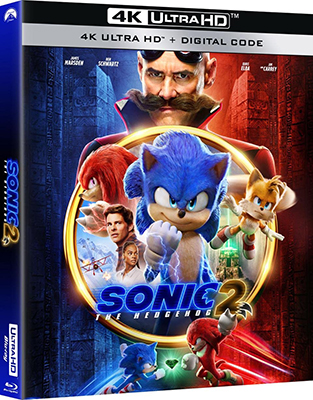 The first Sonic the Hedgehog movie in 2020 was a relatively low-key affair in terms of adapting the Sega video game. Elements from the games were kept to a minimum, as the film focused mainly on establishing the speedy Sonic (voiced by Ben Schwartz) on Earth by pairing him with a sheriff named Tom (James Marsden), who helped Sonic evade Dr. Robotnik (Jim Carrey).

After the success of that first film, for the sequel the filmmakers have opened up the world a bit, introducing more elements from the game, new characters and a lot of high-speed action. It’s a fun ride, especially for fans of the games and the first film, but it runs a bit long as the filmmakers can’t help but indulge in bringing their favorite moments from the game to life.

Robotnik, last seen at the end of the first film trapped on a mushroom planet, is found by the echidna warrior Knuckles (voiced by Idris Elba), who brings him back to Earth in order to track down Sonic. Knuckles believes Sonic is the key to locating a powerful artifact called the Master Emerald, while Robitnik just wants revenge, so they form an alliance. Meanwhile, Tails the flying fox arrives on Earth hoping to help Sonic against Knuckles.

Now that the big three characters from the game are in play, plus Robotnik sporting a look closer to his game appearance with a crazy moustache, the plot doesn’t need to rely on the human side characters as much, and finds an excuse to keep Sonic separated from Tom for most of the movie.

Sonic discovers the map given to him in the first film when he was sent to Earth contains clues to the location of the Master Emerald, setting off an Indiana Jones-type adventure quest as Sonic and Tails hope to find the jewel before Knuckles and Robotnik.

Tom, meanwhile, ventures to Hawaii for his sister-in-law’s wedding, in a storyline that eventually comes back around to tie into the main plot for a spectacular final boss level battle, but it’s a bit of a chore to get through as it feels like a conventional slapstick comedy tacked onto a video game fantasy movie.

Topping things off are some nice messages about teamwork and family.

The film looks great in 4K and the game characters are rendered well, even if they look like cartoon characters dropped into a live-action world. Carrey’s over-the-top performance is probably the key to tying it all together as he’s basically a living cartoon character anyway.

Knuckles will likely be seen as the breakthrough character here, as Elba does some terrific voice work, and Paramount+ is developing a miniseries about the character for release in 2023. The film also lays some groundwork for a third film, which has been announced for 2024 since the second film did better than the first one at the box office.

The Blu-ray includes a five-minute short film called “Sonic Drone Home” that is something of a follow-up to the movie, but is fully CG-animated.

Another highlight is the commentary from Schwartz and director Jeff Fowler, which continues the fun conversation the pair were having in the commentary from the first movie, as they discuss how the movie was made and point out more references to the games.

More behind-the-scenes details are revealed in five featurettes that run a total of about 20 minutes.

Also included are 17 minutes of deleted and alternate scenes, three minutes of bloopers, a humorous Q&A with Schwartz, and a Kid Cudi music video for the song “Stars in the Sky.”

The Sonic the Hedgehog 2 Blu-rays are not offered as combo packs, and are configured as either a standalone 4K disc or a standalone regular Blu-ray. Each has all the bonus material plus a code for a digital copy.