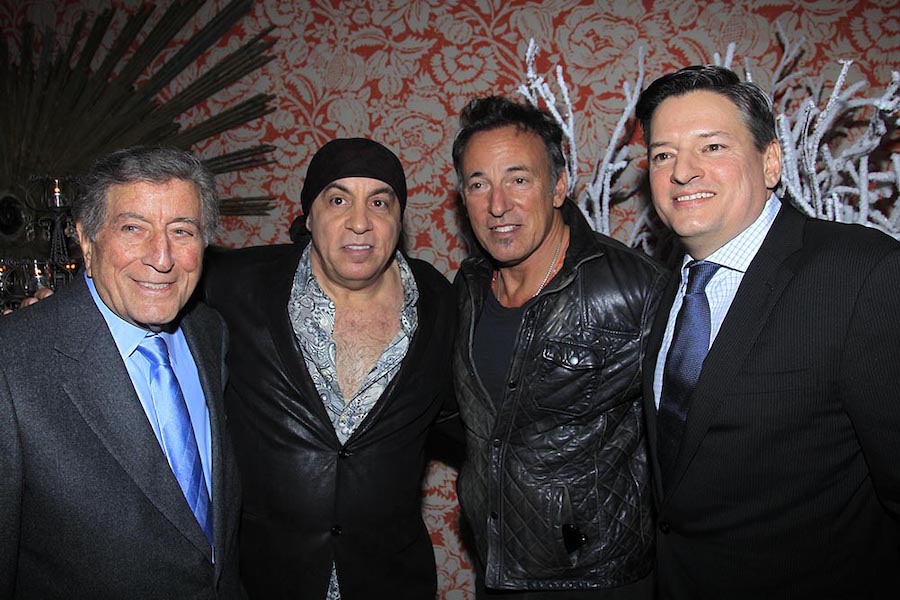 In two days, Netflix will mark the 10th anniversary of its debut in Sweden, followed by subscription streaming access across the rest of the Nordics (Norway, Denmark, Finland). While the streamer tops subscriber households in the region to remain No. 1 in market share, new data from research group Mediavision finds the SVOD behemoth under increased competitive pressure from local streaming services. 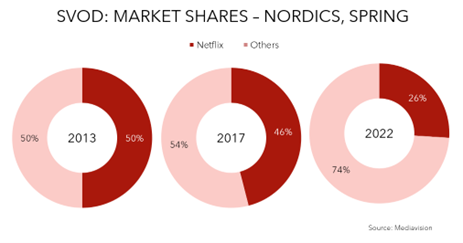 Indeed, the launch of rival global SVOD services, including Disney+, HBO Max and Paramount+, combined with a push by regional players, Netflix this year reported first-time subscriber losses worldwide. While other streaming services enjoyed a boost during the pandemic, Mediavision analysis pointed at diminishing growth for Netflix, below the overall market trajectory following record growth in 2020.

Focusing on the Nordics as a total, Mediavision contends that the past spring was tough for Netflix in the Nordics, including losing subscriber households for the first time.

“Despite the sharp increase in competition, Netflix has remained the Nordic market leader with more than 4 million subscribing households through the fall 2022,” Mediavision wrote in in a report.

A key to Netflix’s success has been focusing on localized content, according to Mediavision. While “Lilyhammer,” which was co-produced with NRK, the Norwegian public broadcaster, was the streamer’s first original content, Netflix was the first global SVOD player to commission Nordic originals. It started off with “The Rain,” a Danish series in the spring of 2018, followed by the Swedish original series “Quicksand,” released in early 2019. Other major titles included “Snabba Cash,” “Bordertown,” “Ragnarök” and “Borgen — Power & Glory”.

By the end of 2021, Netflix had nearly 70 Nordic originals in its library. And the titles have also attracted viewers outside the region. According to Netflix, almost two-thirds of their members globally have chosen to watch a Nordic original film or series. 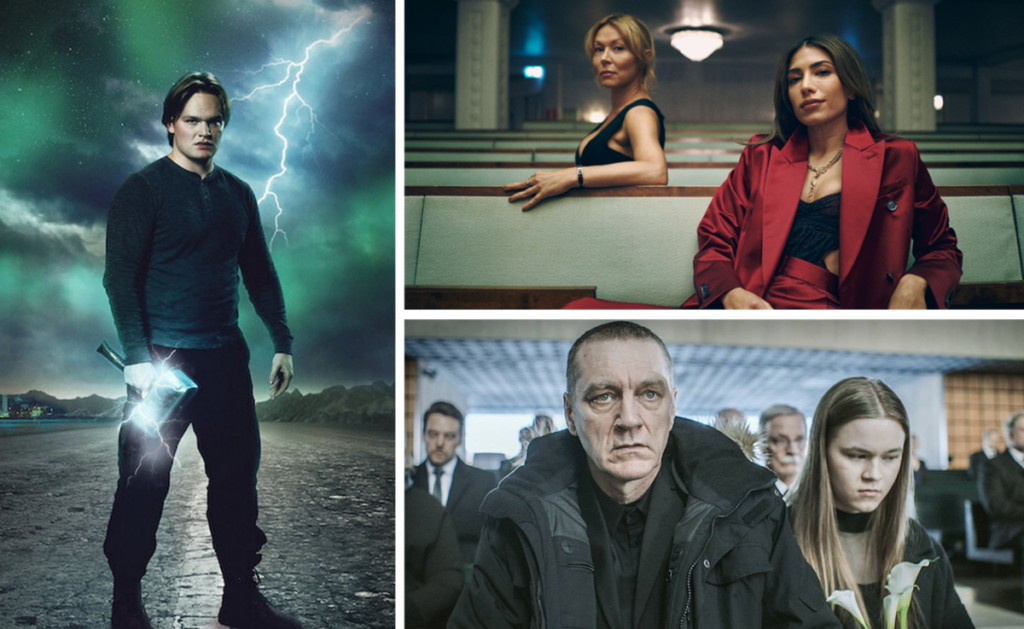 Last year, Netflix expanded its Nordic presence by opening an office in Stockholm. The company also has a management team based in Copenhagen, to further support the region.

Netflix also launched a gaming service, with some operations in the Nordics, as another means of increasing consumer loyalty. The plans are to expand from today’s 24 games, to 50 by the end of the year. So far, games have been downloaded a total of 23.3 million times and average daily users are 1.7 million — less than 1% of Netflix’s 221 million subscribers. 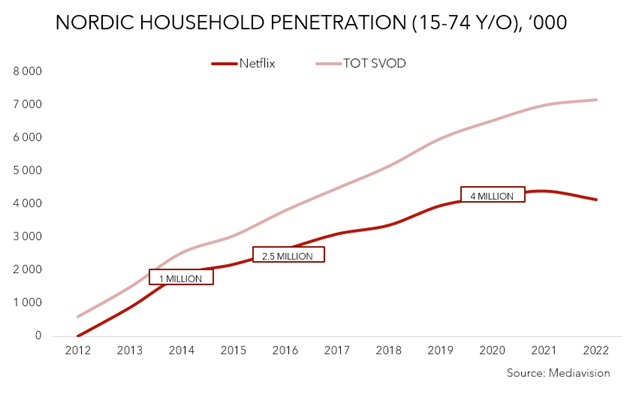 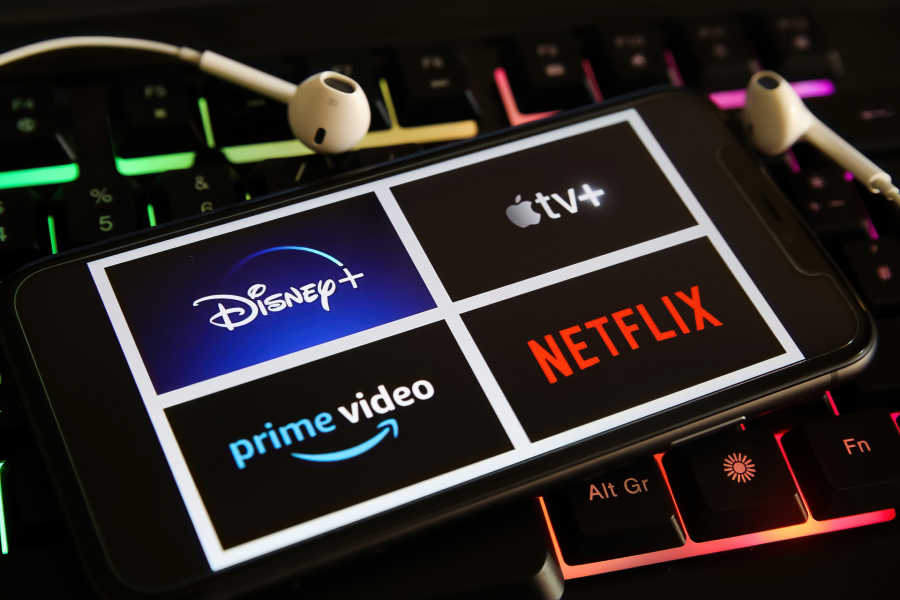 The Disney+ subscription streaming service has generated more than 1.7 million Nordic subscribers in the 24 months since launching operations on Sept. 15, 2020, in Norway, Sweden, Finland and Denmark. The service, which has gained a strong foothold among households with children, is now the fourth-largest SVOD platform in the region after Netflix (with about 4 million subs), according to new data from Mediavision. 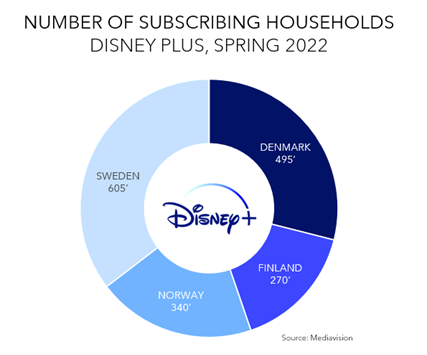 Disney’s rapid streaming success can be explained by its clear positioning within the kids and family segment and an attractive price point. As Mediavision’s analysis shows, about 20% of Disney’s streaming content library (in terms of total hours) is in the kids and family genre — and, according to the consumers’ evaluation, Disney outranks all competitors in this segment.

“It is not an overstatement to say that Disney+ launched with a bang on the Nordic market,” Mediavision analyst Natalia Borelius wrote in a note.

The research firm said the service reached a household penetration of 10% in the Nordics after only two weeks — boosting stacking and subsequently household spend.

“However, a lot has happened these past two years,” Borelius wrote. “The streaming market is saturating, causing [services] to search for new ways to boost subscriptions and increase revenue. Many actors are betting on adding hybrid subscription/advertising tiers — and Disney+ is one of them.”

HBO has gained more than 635,000 new SVOD subscribers in the Nordics since an October 2021 reboot from HBO Nordic to HBO Max, according to new figures from Mediavision.

The gain puts the WarnerMedia-owned streamer back into the top three, with an estimated 2.2 million households — and an average Nordic household penetration of just below 20%.

HBO has always had a strong streaming presence in Scandinavia. It was the first U.S. SVOD service to challenge Netflix, as well as local players such as Viaplay, and establish a strong market position in the region.

Three months ago, the HBO Nordic brand was changed to HBO Max as part of WarnerMedia’s brand reboot in the Nordic countries and worldwide.

In 2019, shortly after the last season of “Game of Thrones” premiered, HBO Nordic reached near 2 million households (15-74-years-olds). But between then and the Max reboot, the service lost about 400,000 subs.

“The launch of HBO Max has had a direct, positive, effect on the total number of Nordic SVOD subscriptions, however, the effect on household penetration is less substantial,” Marie Nilsson, CEO of Mediavision, said in a statement.

Nilsson contends that the majority of the new subs already subscribed to at least one other service. The analyst says Max has pushed “stacking” on the Nordic market. A trend, Nilsson says, is what transpired following the launch of Disney+ in the fall of 2020.

“Our conclusion is that despite a clearly maturing market in terms of SVOD household penetration, we can still expect a continuous growth of subscriptions,” Nilsson said. “The demand for strong content has still not reached its peak in the Nordics.” 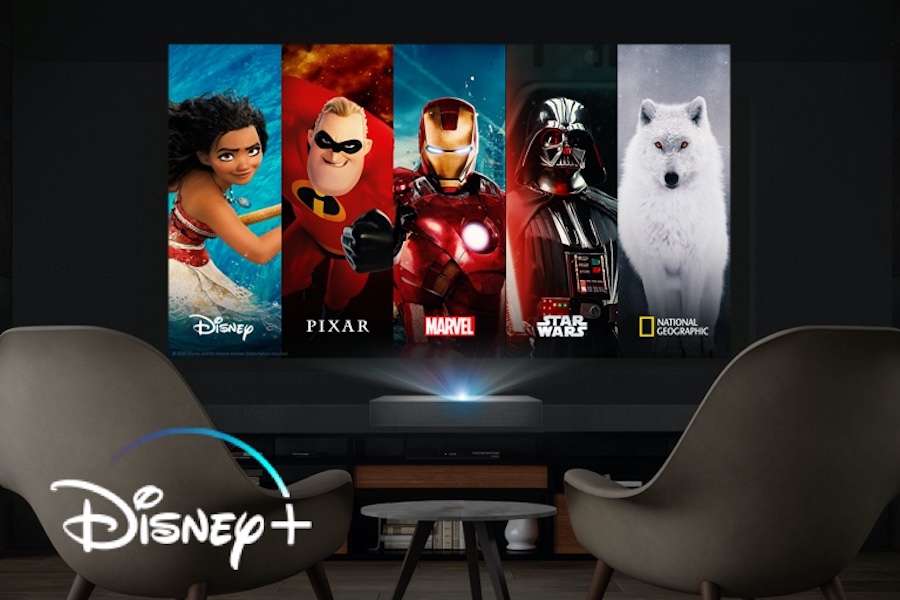 Netflix’s Q1 subscriber figures for the Nordic market show a year-on-year growth of 5%. According to Mediavision analysis, Netflix now has approximately 4.4 million households in the Nordics, tops for the region. Hence, the company’s growth is lower than the overall Nordic SVOD market growth, which is up about 8% year-on-year.

The Nordic countries are all highly digitalized, partly driven by streaming services such as Netflix. The SVOD market penetration in Q1 as a Nordic average is approximately 60%. With the arrival of Disney+, and pending launches of HBO Max and Paramount+, Mediavision analysis suggests that Netflix, albeit still the single largest SVOD service, is no longer the frontrunner in terms of growth. 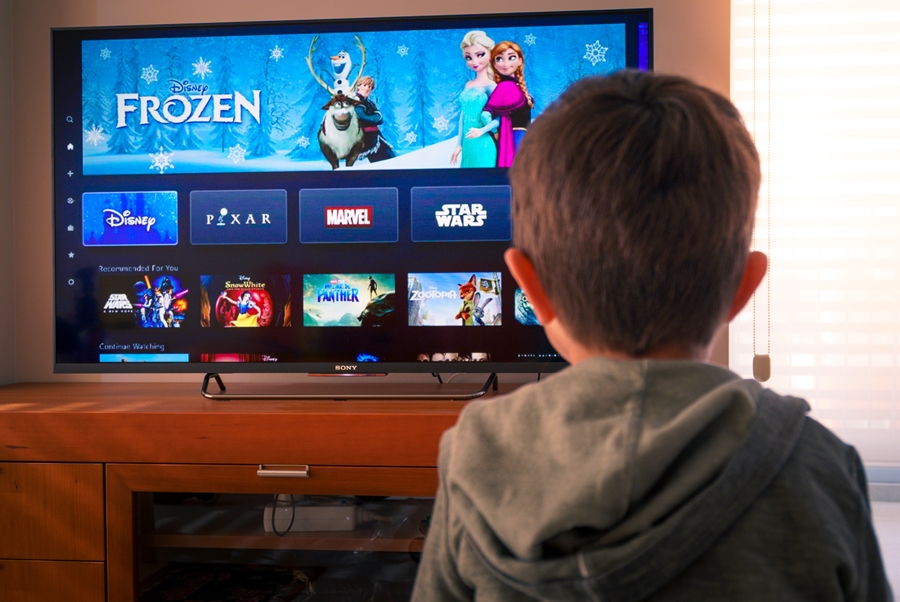 Disney+ only launched in Sweden in 2020, but already the branded SVOD platform has resonated in Sweden, especially among families with young children. New data from Mediavision contends Disney+ generated 450,000 subscribers in the Northern European country just two weeks after launching on Sept. 15. By comparison, Netflix took a year to reach the same subscriber tally after bowing in 2012.

The reason? Children’s programming. Disney is an international force with few equals when it comes to kids content.

In total, kids content accounts for 13% of the total runtime (hours of content) across the Swedish VOD streaming market in Q1 2021. The share of kids content is higher for Disney+ than other streaming services included in the analysis (excluding services solely providing kids content).

“Families with children are without a doubt a strong consumer segment for Disney+ — and Mediavision can conclude that Swedish consumers rate Disney highest of all streaming services in the kids genre,” read the report.

However, in absolute terms — Netflix has the market’s largest kids content library in number of titles and total runtime. 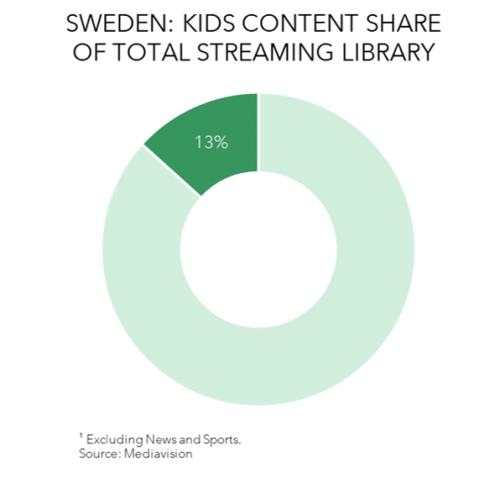 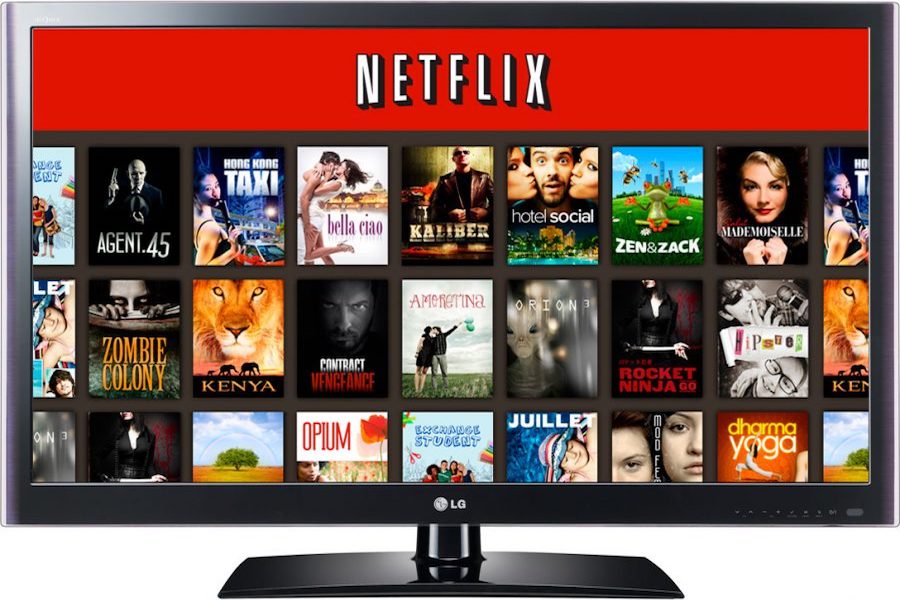 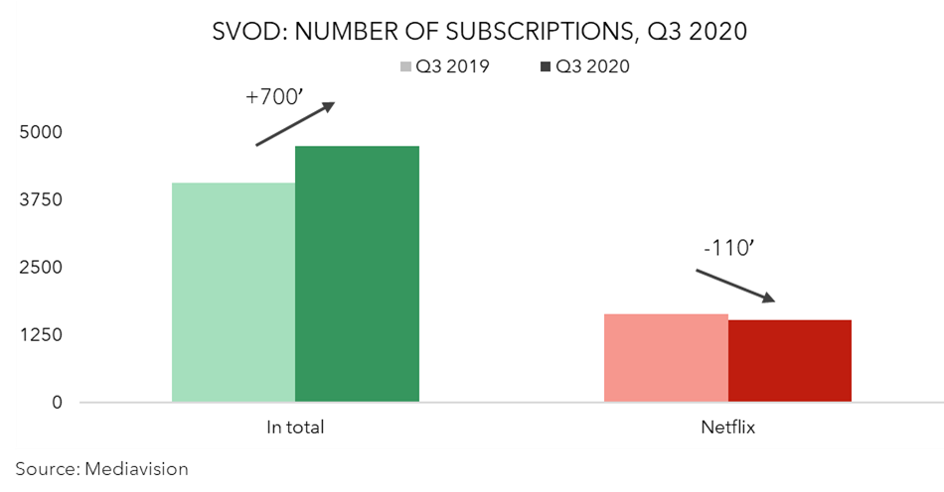