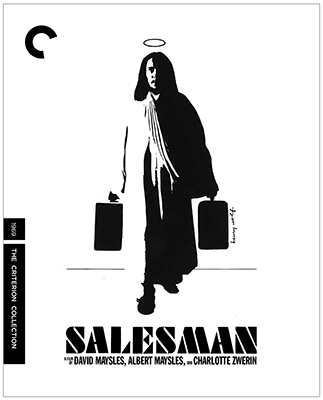 Salesman was the documentary feature debut that put the Maysles Brothers (David and Albert) on the map along with Charlotte Zwerin, whose subtle editing choices here are, with good reason, the kind often termed as “invisible,” though we subliminally sense that they’re there. The team’s real breakthrough, if you’re talking about audience magnets, came a couple years later with Gimme Shelter, aka the Rolling Stones/Altamont train-wreck-on-film — which every hip person of a certain age just had to see at the time (its shelf life has been robust, too). But Salesman, which the Brothers had to go out and sell all by themselves, did garner a lot of ink and outstanding reviews from its very opening.

The result is a highly specialized real-life portrayal that personally hit me between the eyes the first time I saw it — and still does. More on this later, but the salient point here is that we end up following four Irish-Catholic door-to-door salesmen of middle age and pet nicknames — charged with unloading deluxe doorstop Bibles full of elaborate illustrative paintings to customers who haven’t the money to make the monthly payments. There are tough ways to attempt a living, but making cold calls on straight commission as far as six U.S. states away from home is right up there. And then you drive somewhere else the following week.

The 1969 documentary was lucky in a sense because it found a star in the making with soul-of-a-poet main protagonist Paul Brennan, the colorfully blarney-spouting member of the sales quartet (when it suits his needs or fancy) who, by coincidence, became the focus here because he is losing his touch. The old bag-of-tricks formulas that riff on a largely canned presentation aren’t working lately, and he’s starting to press — which then has a way of feeding on itself to make things worse. The other salesmen, who’ve been doing fairly well lately against equally tough odds, are sympathetic — but can’t get too close to Paul (nicknamed “The Badger”) or his escalating woes because they might rub off and poison their own well. But segregation isn’t easy to pull off when they’re all looming in close quarters at this week’s anonymous motel.

At this point, I should probably mention that during that flailing period after grad school when I was awaiting my Big Break (which did eventually come), I went on the road myself under the tutelage of my local Encyclopedia Brittanica rep/manager selling Great Books of the Western World on college campuses from Buffalo to Denton, Texas. It was a much younger crew than the one we see in Salesman, working a classy product (Ptolemy, anyone?) to a sharper clientele. But the documentary’s portrayal of the day-to-day lifestyle (a generous term) is chillingly on the mark, unearthing memories I was happy to relegate to eternal slumber miles beneath the earth’s core.

First, it was the long drives to the selling destination, which meant you began your work day at night when you were already whipped. You shared a motel room with someone who was a decent guy as long as you kept the conversation to the two male basics — sports and women — but with whom you otherwise had nothing in common, starting with the fact that, ironically, they never read books during the job’s rare down time). If motel fluorescent lighting could kill you, I wouldn’t have lived to see The Godfather Part II. And then there were the motivational tapes (something we don’t see the Salesman crew have to endure) that we were strongly motivated to buy; I think my manager (someone I liked but one slick Willie), had a piece of that action. In any event, the recorded motivator talked of nothing but attaining material goods and how you could now arrange your schedule to play a lot of golf (really deep stuff here). Negative thoughts were frowned upon, and here I was in the final chapters of the great Warren G. Harding bio The Shadow of Burning Grove, at a time when the administration’s suicides were beginning (“That’s positive,” said my boss, sardonically). When I finally decided to quit mid-week on the road — and I’d had some boffo sales weeks, though they were strongly front-loaded — he had me on a long bus ride back home in a blink, and I never saw any of the crew again. I would have infected the operation, which I understood and accepted.

One thing these two situations had in common were these impromptu customers’ inability to pay once the vendor got in the door (in Salesman, the crew members say they’re “with the church,” which is at best true only on a whopper of a technicality). The Maysles did their filming — and they found that most customers liked, and soon got used to, being on camera — in 1966 or early ’67. One offshoot of this is that everyone here smokes (“Sure, come right into my home and light up”), and truth to tell, this is equally so of the housewives-in-curlers who have to listen to the pitch, occasionally bite and then get read the riot act when their husbands get home that night to see that the family budget has been ambushed. By this time, it’s impossible to cancel the order, though laws were later enacted by the time of my own employment to provide a short “remorse” window.

The Maysles divide their shooting time between miserably snowy Massachusetts not far from Boston and Miami, with the latter a seeming respite except for the fact that the neighborhood streets where Paul is assigned are such a byzantine tackle box that he can’t locate the household on which he has a lead, however shaky. Adding narrative rhythm to all this are the crew’s bull sessions back in their motel rooms (lots of low-stakes poker gets played for a quality-of-life bonus) and also the large national group meeting that’s intended to provide both motivation and a little ass-kicking. The sales manager isn’t exactly ogre-ish Alec Baldwin in Glengarry Glen Ross, but he makes it clear that they’d better produce — while the publisher rep, spiritual dimension quickly dispensed with, concedes they are basically pushing “product.” Paul and one other guy on his specific crew are thin and bony, but practically everyone else here is overweight, middle-aged and a figure of sympathy unless he happens to be on a sales roll.

The accompanying essay by critic Michael Chaiken and a 1969 Maysles TV interview by onetime Newsweek film critic Jack Kroll are up to Criterion standards and the original DVD’s commentary by Albert Mayles and Zwerin has been carried over. But the high point is unquestionably the full-length inclusion of a spoof from the “Documentary Now!” cable series, in which Bill Hader and Fred Armisen expertly have their way in Globesman, a precisely detailed replication about guys trudging through the same snow and the like to peddle globes. Hader also provides a separate appreciation for the original film. As he has proven before, Hader is no movie dilettante, but a funny man who also truly knows and loves film history. He is a treasure.