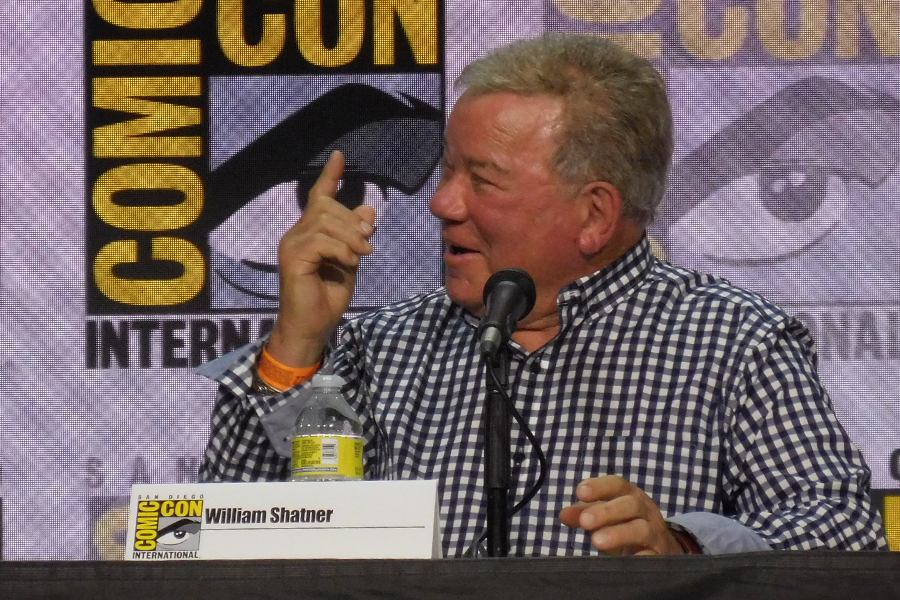 SAN DIEGO — William Shatner had himself a day at Comic-Con.

The 91-year-old actor best known for playing Capt. James T. Kirk on “Star Trek” spent the opening day of San Diego Comic-Con International, July 21, reflecting on his career at several events promoting an upcoming documentary about his life, and even officially joined the ranks of the “Masters of the Universe,” while being feted by fans and colleagues.

Filmmaker Kevin Smith summed up Shatner’s impact with his introduction to the “Shatner on Shatner” Hall H panel that closed out the first day of Comic-Con’s return as an in-person staple of summer fandom, with the 2020 and 2021 shows relegated to online events due to the pandemic.

“How does it feel to be home kids? Welcome back,” said Smith, a longtime staple of Comic-Con. “Three long years waiting for this moment and the summer’s finally been redefined, and tonight we’re going to do one of the most Comic-Con things you can do at Comic-Con, we’re going to sit down and talk to a living legend, ladies and gentlemen. If there is a pop culture Mount Rushmore, and you just have to pick four faces, his face is definitely one of those faces.”

That announcement was made during the “Masters of the Universe” 40th Anniversary panel also hosted by Smith, who repeated a story he told about working with Shatner in the voice booth. As showrunner, Smith doesn’t normally direct the voiceovers for the show, but couldn’t resist the opportunity “years from now to say I directed Captain Kirk!”

With Shatner preparing to read his lines, Smith recalled, “I said, ‘Hey Bill, do me a favor, on this line do it like super fast like you’re frustrated or something like that.’ And he goes, this is my favorite thing that ever happened — we were doing it on Zoom, so he’s in a booth at a recording studio, I’m on a laptop at my home; my wife is literally just off to the side reading a book, disinterested until what happened happened, and he goes, ‘Kevin, Kevin, Kevin. In a moment, you will have the honor of directing me. Let me work through this first.’”

Smith continued: “And so I stepped back and gave the man his space, and I looked over at my wife who had put her book down to stare at me wide-eyed. And I look at her and I pressed mute, and she said, ‘It took Captain Kirk to get Silent Bob to shut up!”

The main topic of discussion for the “Shatner on Shatner” panel was a new documentary being made about Shatner’s life in conjunction with Legion M, which is touted as the first fan-owned entertainment company, and Exhibit A pictures.

In discussing why now was the right time to do a documentary about him, Shatner reflected on how it’s becoming harder to remain active as he gets older.

“My breath is short, I’m 91 years old, and this wonderful gentleman came along in the knick of time,” Shatner said, then joked, “All these autographs I’m doing are going to be worth a lot more money when I die, and the documentary on my life, think of how quickly you’ll sell it if I should die on the panel. Imagine everyone’s good fortune if I should die right here.”

“None of us want that sir, but that would be amazing,” Smith retorted. “People would be like, he died like the legend he was.”

The documentary came about shortly after Shatner became an advisor to Legion M, according to VP of development David Baxter.

“We talked about this idea of a fan-owned company and he’s like, you should talk to my people, and we did, and once that dialogue started going back and forth about the power of the fans, the fact that they’re the ones who consume all this media, so why shouldn’t they have an upsell, he was intrigued,” Baxter said.

Legion M used equity crowdfunding to produce films, TV shows and VR projects, and is owned by 35,000 investors who can join the company for as little as $100. Legion M also helped Smith make 2019’s Jay and Silent Bob Reboot, and recruited him years ago to interview the late Stan Lee for an Icons documentary that is still being completed.

Baxter recalls mentioning Shatner’s involvement with Legion M to Exhibit A’s Alexandre O. Philippe, the director of another of the company’s productions, Memory: The Origins of Alien, a documentary about Ridley Scott’s 1979 sci-fi thriller.

“He said, ‘My god, I’ve always wanted to make a documentary about William Shatner,’” Baxter recalled. “I said, ‘Let’s see what we can do.”

Shatner said he agreed to do the project after discussing it with Philippe.

“I was betting on you guys and I knew Alexandre’s reputation. I was going on faith,” Shatner said. “The management of this company is terrific. This is a group of vital, young, intelligent, creative people.”

“I grew up watching Bill on a black-and-white television in Switzerland, and I’ve been a fan for a long time,” Philippe said. “I’m really a fan of Bill the human, and I’m really a fan of your observations on life, on the nature and the universe, on these connections, these things that connect us all in strange and mysterious ways. So I started really thinking about what is the best way at least from my perspective to make a film about Bill, and I was thinking about his wonderful autobiographical songs.

“Basically I decided to structure the doc around a number of songs, and delve into essentially a number of themes that I felt were really important, and so the film is really a celebration of Bill the human and his career of course. So it’s going to be a very lyrical film, a very poetic film.”

Added producer Kerry Deignan Roy: “It’s amazing the energy this man has, and it’s been a joy just to work with him, and to share this moment in time. We spent three days together in a studio grilling him, and he shared a lot.”

In the afternoon, Shatner took the time to stop by NBCUniversal’s display across the street from the San Diego Convention Center promoting its Covi TV FAST (free ad-supported streaming television) channel with the car from “3rd Rock From the Sun,” on which Shatner guest starred.

In the morning, as part of Legion M’s activities to promote the documentary, Shatner participated in a handprint ceremony at Theatre Box San Diego, where the lobby is adorned with signatures, handprints and footprints of Hollywood icons dating back decades. An afterparty was held at the venue following the Hall H panel.

Shatner, an accomplished equestrian, said he had been competing in a horse show in San Francisco the day before.

“My hands are swollen,” Shatner joked. “I’m really afraid that when I put my hands in the cement it will stick and I’ll be like in a kneeling position for the rest of my life.”

Among the special guests in attendance at the handprint ceremony were legendary film critic Leonard Maltin, and actor Paul Wesley, who is taking on the role of Capt. Kirk in the new Paramount+ TV series “Star Trek: Strange New Worlds.”

“We all know Mr. Shatner is a Broadway star, a Shakespearian performer, an equestrian, an author, a recording artist, an astronaut, among many many other credentials,” Maltin said, before discussing Shatner’s role in a 1997 radio production re-creating Orson Welles notorious War of the Worlds broadcast based on the HG Wells book.

“Who’d it star? William Shatner,” Maltin said. “I had a bit part as a radio announcer. I wasn’t very good. He was great. And there is an art, a technique to radio acting. It doesn’t just happen. Not every actor is automatically good acting without being able to use your face. Without being able to use body language, gestures. He acquired that art.

“It just says that William Shatner is the complete actor. He can do anything. Whatever he does, you know he’s going to do it well. That’s why we love him.”

Wesley said Shatner was supportive of him taking on the role of Kirk.

“How do you replace a legend? Well, you don’t. It’s simply not possible, and why would you try? Instead you promise to safeguard the legacy entrusted to you, and then you go out and do the work. You find some way to make the role your own while finding some way to honor the history that it carries,” Wesley said. “Precious few roles in television and film present such a daunting challenge. One of them is certainly ‘Star Trek’s’ James T. Kirk. This character’s place in entertainment history is indelible. It’s a fixed moment in our collective memory. No matter where you go, no matter where you are, an image of Capt. Kirk brings instant recognition. Why is that? Because for nearly 60 years that role has been personified by a man of equally renowned stature, Mr. William Shatner.

“Attempting to re-create an iconic screen role is a tall order. You’re following in the footsteps of gifted actors who blazed the trail you now walk. But if we tread where they’ve already been, it does no justice to the role or those who inhabited it before you. Actors who took the words written on the page and embodied them with everything they possessed as artists. You’re expected to do nothing less. And in fact you’re expected to bring something more. Something previously unseen and perhaps something unexpected. While at the same time paying homage from whom you’ve taken the mantle.

“Now that is a tough gig on any normal day, but for a day on ‘Star Trek’ where you’ve been asked to take on the role of Captain Kirk, it is both a challenge and the opportunity of a lifetime. And I can’t imagine taking on such a character, and everything it means for countless fans, without having the support of the man who first brought him to life. Thankfully, Bill, or Mr. Shatner, the original captain himself, went out of his way to make a newcomer like me feel welcome, and for that I will forever feel grateful.”

On the other hand, Shatner didn’t mince words at the Hall H panel when asked if there were any standout performances from the “Star Trek” shows that came after his.

“Nothing,” Shatner said. “I got to know [“Star Trek” creator] Gene Roddenberry in three years fairly well … but he’d be turning in his grave at some of the stuff.”