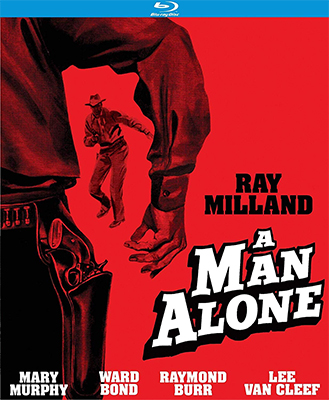 As the latest Kino Blu-ray of an under-appreciated sleeper shown at this year’s two MoMA Republic Pictures tributes under Martin Scorsese’s imprimatur, 1955’s A Man Alone is the movie that finally satisfied lead Ray Milland’s long-gestating desire to direct. It’s also a childhood and early adolescent favorite that I used to watch every time it aired on TV — though as recently as a year ago, I would have thought its chances of getting its own Blu-ray were as remote as a guy attempting to bump off his wife when she was played by Grace Kelly. Of course, the actor had done quite well with that impossible concept just a year before Alone’s original release when he had the lead in Hitchcock’s Dial M for Murder.

Milland was pretty polished in that one, but in Alone, his Western character eats so much sand that in one scene (the first, in fact), it really looks as if he’s spitting some out for real after his horse takes a fatal desert fall. Maybe this is what you’re willing to do when acting in your own picture, though I doubt if Republic’s famously parsimonious chief Herbert J. Yates (who managed to hack off Roy and Gene and John Wayne) gave him a piece of the gross. This said, bonus commentary historian Toby Roan quotes Milland as saying Yates’s word was ultimately solid once financial bandying was completed, and the actor returned to Republic just a year later to direct the also new-on-Blu-ray Lisbon — another movie I’ve always liked and one that felicitously traded in on Nelson Riddle’s possibly unexpected chart buster of Lisbon Antigua in early ’56 as counter-programming to the Elvis boom.

Though it would be a stretch to describe Alone as an attempt to fashion something of an art film out of a well-worn genre, the picture remains an intriguingly curious mix of backlot jawboning involving a lot of familiar-looking Western character actors and a shaky-‘A’ that largely pulls off an attempt to do something different starting with a long opening without any dialogue. Milland (speaking of “alone”) commands this section by himself, and it’s roughly 30 minutes in — or nearly a third of the running time — before there’s any conversation. Perhaps this was all laid out neatly in a script and story credited to John Tucker Battle and Mort Briskin, but it’s worth noting that just three years earlier, Milland had headlined Russell Rouse’s The Thief, an espionage drama that utilized sound effects and nothing more for its entire running time.

Working from a theme for which Henry King’s The Gunfighter is still the final word, the movie poses Milland as a weary ex-gunfighter who unknowingly rides into a dusty town (and I mean dusty town) to be immediately accused of past robberies and now the latest and most heinous: a stagecoach stickup in which a young girl known to all was slaughtered. Barely given enough time to utter “what the hell?” to himself, Milland takes cover in the first available basement — but not before finding himself just feet away from an opaque conversation that has a bad smell to it. As coincidence would have it — and there are a few of them here — it’s information that comes in handy down the road when he can attach names and faces to their community standing. Which is to say that a lot of the town heavyweights — and in Raymond Burr’s case, you can take this literally — have been up to no good.

Stuck in the basement with a cat, some peach preserves, and gritty pores, Milland is secretly situated well enough in to witness a young woman (Mary Murphy) coming down the stairs to interact … well, hopefully … with her hope chest. Maybe this is why Murphy remains surprisingly sanguine throughout at having a) a strange man and also b) accused killer, on the premises. This is one of those burgs where all the men are either over 50, younger hired-gun creeps or the world’s most ineffective sheriff’s deputy (“Gilligan’s Island” star Alan Hale Jr., and yes, you read that right). It’s also one of those familiar movie-Western towns where the women must be hiding out making peach preserves of their own: the only other female role of note goes to character actress and biddie specialist Minerva Urecal, who was just as aptly cast around this time in a TV version of Tugboat Annie that I used to watch as a kid. Well, it’s a way of controlling the population, though from all appearances, it could use a fresh influx.

Murphy not only doesn’t live alone, but her father is the town sheriff (Ward Bond) — though one helpfully out of commission because he’s quarantined upstairs in bed with a case of yellow fever, another coincidence. Even so, the narrative grips surprisingly tightly despite abundant dialogue, playing out a lot better than it should due to the conviction the leads bring to their roles; even the stock villain (Burr) gets brownie points because the role is so ideally cast. This was about two years before TV’s “Perry Mason” changed Burr’s image and forced him to drop significant weight (maybe Milland sent along a few cases of the fresh cactus juice his parched character is glad to have out in the desert during the film’s opening). Here, Burr looks as if he’s wearing about a 96-long playing the transparent phony his character is — transparent, that is, to everyone except the townsfolk who matter.

Commentator Roan, who seems less enthusiastic than I about the film, notes that reviewers at the time had a tough time accepting Murphy as a blonde, given that she was a natural brunette during her undeservedly short heyday on the screen (I love her as the negliged schemer in Phil Karlson’s VistaVision/Technicolor toughie Hell’s Island, last in the director’s fruitful noir trilogy with John Payne). It’s true that her makeup is distractingly heavy for one just hanging around the house caring for pop, and if the goldilocks look as if they’d had some “help” from the makeup department, they still look pretty good. Murphy also played the coffee-shop/bar counter-babe who reforms Brando’s hood in The Wild One and basically turns him into a “Whatever. You. Want. Comma. Honey” type, no matter what pigment she brandishes. Murphy’s Alone character is, by the way, no sweet-ums pushover but a attractive mix of tough analytical logic and vulnerability. Bond’s sheriff isn’t boilerplate, either; there’s something of a surprise in store.

Though it’s in some ways a psychological or “adult” Western — which, in Republic terms, means that there’s no shoehorned-in song break with Lee Van Cleef, who has a small part — the old-school fan base is rewarded with some gunplay when matters are on the line. There’s even a particularly brutal fistfight between Milland and Burr (stay down till the 9-count, Mr. Burr, you look a little winded breadbasket). During which, Milland (or his stunt double) flips Burr (or another stunt double) off his back. Hernia City.

As Variety used to say, technical credits are “pro” — though even with 4K scanning, cinematographer Lionel Lindon obviously doesn’t have as much to work with here as Jack Marta had shooting on-location Portugal locales in Lisbon (which was also shot in Republic’s in-house anamorphic process: Naturama). There’s also a very good score by workhouse Victor Young that illustrates the degree to which film artists must hop around and go where the work is. One year, it’s a Republic Western. The next it’s Lindon and Young laboring on the extravaganza that won them their Oscars: Around the World in 80 Days.