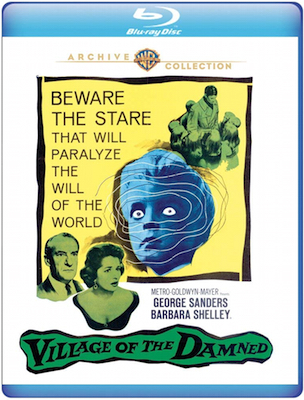 For a movie that proved popular enough to inspire 1964’s Children of the Damned as a sequel, MGM’s Village original unsettled the studio so much that it initially delayed even filming John Wyndham source novel — then kept the completed picture on the shelf in America until a successful Brit release paved the way for a December 1960 launch over here. Gotta say that made for a fairly eclectic Metro year-end schedule, what with Anthony Mann’s Cimarron remake (or, put another way, Glenn Ford “essaying” Richard Dix) and the Ft. Lauderdale-frolic-with-an-edge Where the Boys Are coming out at the same time as well.

Of course, fooling around on a Florida spring break can merely result in a standard childbirth, whereas Village has a much creepier hook. Its inhabitants in an English community are temporarily knocked unconscious by who-knows-what, and before long every female of the appropriate age finds herself “with child,” as Pearl Buck used to write. The women remember nothing but neither do the men, which puts some of the former in a steamed state over perceived infidelities. It turns out, however, that aliens are the culprit — and it was this immaculate conception angle, when the Catholic-driven Production Code could still breathe in its oxygen tent, that scared MGM. Just think of the controversy eight years later over Rosemary’s Baby, and you get the idea. Hell, England hadn’t even had the Profumo Scandal yet.

The resulting offspring are the quite the parcel. They have slightly enlarged heads, eerie eyes, platinum blonde hair, grown-up intelligence, telepathic skills, a chilly way of speaking and (I’m guessing on this one) a future disinclination to get loaded at a soccer game rowdily rooting for their team of choice. Young Martin Stephens, who’d be so unforgettable just a year later in Jack Clayton’s standout movie of Henry James’s The Turn of the Screw (called The Innocents) is the story’s main go-to little creep — now a family member in the household of a professor (George Sanders) and a wife (Barbara Shelley) who delivered this bad seed. Author Wyndham apparently had a thing for this kind of story. He also wrote the novel that inspired 1963’s Day of the Triffids (or, as ads might have trumpeted, “Howard Keel as You’ve Never Seen Him”) — a fun movie that’s been very poorly served on every home version I’ve ever seen, though the ancient laserdisc was probably the best.

On an effectively low-key but occasionally droll bonus commentary, horror specialist Steve Haberman asserts (undeniably) that for a short while, Stephens was Britain’s top child actor until the international love fest with Hayley Mills, which was already imminent. Mills had the advantage of being lovable and being cast in lovable roles; one of my best friends wanted to act upon “Let’s Get Together” with her for years. It was tough to imagine the Stephens seen here in The Parent Trap, though I can someone having fun with the premise that propelled “The Patty Duke Show” and having this creature play cousins with contrasting personalities: one an alien offspring and one a regular kid who listened to Cliff Richards and The Dave Clark Five.

Sanders is excellent here in what Haberman notes is an uncommonly “sincere” performance given the all cads, philanderers and (re his All About Eve Oscar) acidic drama critics he played; I believe it was Sanders to whom one long-ago writer was referring when he said that “a grapefruit wouldn’t dare squirt in his eye.” I remember when Sanders committed suicide in 1972, but the commentary offers some sad detail I didn’t know about events that led up to it. Haberman also notes cult actress Steele’s disappointment that the script didn’t go a few extra miles and examine the effect of these little demons (treated more sympathetically in the lackluster sequel, if memory serves) on the mothers who carried them. Given that this was a major component of the certified smash Rosemary’s Baby, it’s an astute point.

Even so, the picture was a sleeper hit at a time when fading MGM needed them. And speaking just personally, the movie’s tone (singular weirdness in an otherwise normal universe) and central idea (sinister seeds or pods with ideas of their own) do appeal to me — even though Don Siegel and Philip Kaufman brought significantly more punch to their respective takes on Invasion of the Body Snatchers. This said, no one can discount the presentation here: the actors’ sweat beads are alive and well on large home screens whenever the action calls for them.