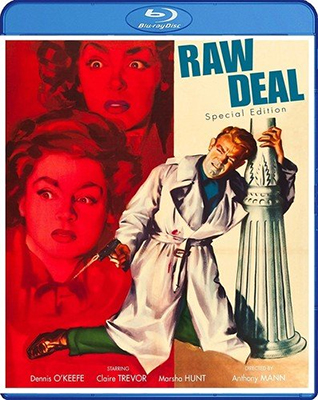 Despite enough prowess shooting in color to have won an Oscar for photographing the ballet sequence in An American in Paris, the still revered John Alton ranks way up there with, say, RKO, real-life rap-sheet artiste Lawrence Tierney and the young Anthony Mann as an automatic word-association touchstone when it comes to even rudimentary discussions of film noir. Much of Alton’s photographic work was for Mann himself before the latter went all big-time to direct James Stewart, Charlton Heston and let us not forget Mario Lanza (in Serenade, to save you an IMDb.com stop-off) in major studio endeavors with real budgets. Raw Deal is one of the pictures on which Mann and Alton collaborated for the tiny, relatively short-lived but always-resourceful distributor Eagle-Lion. Running a tight 84 minutes before Raymond Burr takes a memorable big bounce in the climax, it had been preceded by the team’s T-Men, which became one of the standout movie sleepers of 1947 (maybe the sleeper) after that undercover treasury agent melodrama rated a spread in Life magazine, not your everyday occurrence.

Both films shared the same male lead, Dennis O’Keefe, who had recently come into his own with, among other projects, a couple well-received comedies after a long apprenticeship grind. He now suddenly found himself an ideal actor of noir, thanks to looks on the high-side of “Average Joe” and a demeanor that suggested he could take care of himself. I became kind of a fan early on as a child courtesy of Chicago Syndicate (featuring Xavier Cugat as “Benny Chico”) and Inside Detroit — both of them metropolis-underbelly exposés that I caught at my nearby Lane Theater in 1955 and ’56 in a possible attempt to gauge whether five-a-year director Fred Sears (who also had five films in the can when he died of a heart attack at 44) was an auteur. OK, I’m kidding with the auteur crack, but not so about O’Keefe, who’s something of a comfortable presence throughout Raw Deal despite its occasional pronounced brutality, including a pair of wall-mounted antlers that put featured henchman John Ireland’s face in need of Michael DeBakey’s best suture kit. One unexpected extra in this release’s bonus section is an interview with O’Keefe’s son. Nice.

This said, Deal has been equally positioned by some as a “woman’s picture” — notwithstanding the still eye-opening bit where heavy-in-both-senses Burr heaves a flambé at a nagging live-in who’s getting on his nerves (something apparently easy to do). Truth to tell, the picture is a love triangle as much as it is anything, with sympathetic narrator/moll Claire Trevor frustrated that breaking O’Keefe out of jail hasn’t been enough and that Marsha Hunt (employed by O’Keefe’s lawyer) is falling for him against her better judgment and with some small degree of reciprocity. Hunt, an interestingly complicated character, even finds herself a tad excited over entering a world of crime — not nearly to the degree of say, Peggy Cummins in Gun Crazy but enough to make us wonder what’s going on in her complicated head. Helping the audience not to be complicit in these shenanigans as well is the fact that O’Keefe has actually taken the rap for Burr and has been stiffed on money owed to him, which explains the latter’s nervy state.

Like most Eagle-Lions, Deal has been fairy seeable for years but in prints of varying quality — none of them capable of showing what Alton could do and does here. I remember a longtime friend of mine coming out of a mint 35mm print of John Ford’s black-and-white My Darling Clementine years ago and raving about how Joe MacDonald’s photography showcased 50 shades of gray (back when there was a different vowel in “gray” and the phrase a purer connotation). Something like that happens here in the nocturnal woodsy scenes in which the permutations of foliage spread out in minute detail — this, of course, in addition to the expected shadowy photography of actors. Which, in this case, is also full of surprisingly complex and situation-revealing blocking that Mann was also great at, even amid a short shooting schedule.

Deal is the newest release from ClassicFlix, a distributor that really knows how to ask for money. But it has also done a stellar job making films that have for decades being seeable in compromised form and making them look the best they have since their original releases, which usually date back to somewhere around the time when I was spitting up on my crib bumpers. There’s some really first-rate talent on the bonus extras: Jeremy Arnold for the voiceover commentary, who, in news to me, is a protégé of Mann expert, movie expert and all-around great person Jeanine Basinger; Twilight Time’s Julie Kirgo; director/historian Courtney Joyner; and arguably dominant Alan K. Rode, who’s had a great recent run benchmarked by his mammoth Michael Curtiz: A Life in Film — a 700-pager I was rolling along in, lickety-split, when Michael Woolf’s stop-the-presses Fire and Fury put me on a Rode pause button (absolutely temporary) just as I was getting to The Adventures of Robin Hood. There’s a before/after digital restoration comparison — your eyes will tell the story — and an essay by Max Alvarez, who wrote The Crime Films of Anthony Mann, which constituted most of the director’s early career. And by the way, an on-camera Rode gets off a really good one here about the size of Burr’s shoulders.

Mann would soon branch out in his subject matter, even as his skill with black-and-white briefly sustained itself before he mostly began working in color. Criterion did a wonderful job with the DVD for The Furies — a Mann Western I’ve always liked a lot and one that would almost certainly make a great Blu-ray. And it also would be something to see at least a foreign-region attempt to transfer the outdoor grit of Winchester ’73 into the high-def format. William Daniels shot it for Mann, 36 years years after laboring on (and that must have been the verb) Stroheim’s Greed, which definitely showed he knew a thing or two about photographing Western dust.