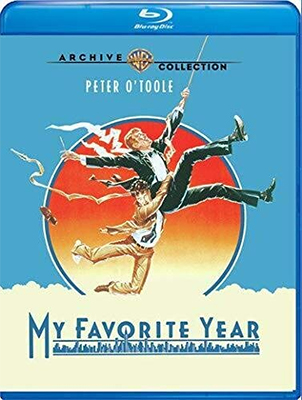 Richard Benjamin struck gold as a director in a way he never would again in 1982’s My Favorite Year, a modest but transcendently sweeter-than-ever comedy inspired by the same “Sid Caesar Experience” that long ago entered the realm of folklore from the likes of surviving raconteurs Carl Reiner and Mel Brooks. Think about what Caesar demanded of his colleagues: a weekly 90-minute comedy revue (eventually shortened to an hour under various marquee titles) that aired on NBC for 39 Saturday nights a year. And these were packed with lengthy skits that never played down to their audience, though it helped that Caesar fans were among the sharpest of all TV viewers.

This is the background, but there’s also a foreground, and despite the picture’s bulls-eye casting all the way down the line, it’s dominated by Peter O’Toole, who got his seventh of eight Oscar nominations here (a run that got him no wins, though he did eventually get a special career award). If I had to pick one movie to explain why O’Toole was so beloved by so many for so many screen decades, Year would have to be on the short list of contenders and quite possibly in the top spot. He had the natural tools to pull off playing an old-style movie swashbuckler hero, and there weren’t many actors after the collapse of the studio system who could do that. But O’Toole also gave us a flawed fading superstar now in a perpetually pickled state, a condition that never obscured a protagonist that the character had surprising residues of depth despite masking his insecurities with bravado.

The year we’re talking is 1954, and when the movie’s opening gives us two minor musical anachronisms and a mild movie one within a couple minutes, its artistic future is far from assured. Yet all three of these not-quites are in the emotional spirit of the times as delineated by a keen Norman Steinberg-Dennis Palumbo script. So when there’s suddenly a shot of Radio City Music Hall advertising its current showing of Seven Brides for Seven Brothers, all is forgiven. This last is as “1954” as “Sh-Boom” and Willie Mays’s catch off Vic Wertz in the coming fall’s World Series (though we’ll leave Joe McCarthy and Roy Cohn out of the discussion because Year is conceived as a happy movie where even its heavy is on the far side of lovable.

In a stroke of good fortune, Benjamin found Mark Linn-Baker (the first young actor he interviewed) to play “Benjy” Stone, a staff assistant who’s assigned to keep an eye on O’Toole’s Alan Swann character during the lead-up to the show. Swann is conceived as a takeoff on Errol Flynn, who actually did guest on one of the Caesar shows without incident but was otherwise famous for offscreen drinking and scandals with women, some of them on the young (and even too-young) side. Benji’s instructions are to keep Swann in his presence at all times, as if this onetime screen legend is a bag carrying nuclear codes, which in a way he is.

Another casting jewel is Joseph Bologna as the bigger-than-life character inspired by Caesar (here called “King Kaiser”); if there were an Oscar category for best shoulder pads, Bologna would have won it here in a runaway. These accouterments are part of the show’s continuing routine that’s been spoofing (and infuriating) a Hoffa-like combination of well-dressed labor leader and hood (Cameron Mitchell) — stuffing that makes the already large Kaiser look even bigger than he is. This is in keeping with reality: Though you wouldn’t know it from the way he permanently slimmed down from the late ’60s on, stories of Caesar’s onetime physical strength (lifting tables, lifting cars, etc.) are legion. My favorite, told by either Reiner or Brooks (who were, respectively, Caesar’s TV foil and writing staffer) involved a driver who stole a parking place that Caesar wanted and then just sat there in the driver’s seat with the window cranked down enough to leave a little open space at the top. Whereupon an enraged Caesar confronted the guy and asked him if he were anxious to relive the circumstances of his birth.

There are other subplots or at least plot tributaries, all of them good to one degree or another. The standout of these involves Benji taking Swann to dinner at his parents’ apartment in exotic Brooklyn — a set piece that some no doubt criticized for hitting every Jewish stereotype in the book, except that Benjamin (delivering a supremely enjoyable commentary from the old DVD) is adamant that everything here is vastly toned down from reality. Which they no doubt are. (Not to equate the two, but I was always struck by how the original source books that were adapted by Martin Scorsese into Casino and Wolf of Wall Street had episodes or at least references that were more anti-social or even sociopathic than anything in the movie versions.)

The character-rich script has so much old-school comedy going for it, but modest in scale or not, this is definitely a picture that’s directed; gags are set up (sometimes multiple scenes in advance), and Benjamin proved to be an actor’s director with his feature debut, though it always helps when you’re in sync with a simpatico cast of like comic minds. Adolph Green, Bill Macy, Selma Diamond, and Lou Jacobi are just some who have privileged moments, while Jessica Harper is comely-plus as an assistant with looks — as Benjamin points out in his commentary — that’s very true to the period. I’ll never be able to figure out why so many of Benjamin’s subsequent projects were bombs because there’s no indication here that his contribution was any fluke.

Caesar’s stable of writers had such a deep bench that it also included Neil Simon and (later in the run) Larry Gelbart and Woody Allen — with Lucille Kallen living what had to have been a really interesting existence as the only woman, though Selma Diamond joined after the original “Your Show of Shows” morphed into “Caesar’s Hour.” All this may be tough to follow, so the best solution might be to watch this movie and then one of the many Caesar collections that have been issued on DVD over the years in good-quality kinescopes.

His pairings with Imogene Coca and later Nanette Fabray remain indelible, but forced to choose, my favorites (both as a child and still) are Caesar, Reiner, Howard Morris and wigs not to be believed in their rock-spoof routines featuring “The Haircuts” — sometimes known as “The Three Haircuts.” I even have their 1955 RCA-Victor rendition of “You Are So Rare to Me” on my iPhone, a recording that came out around the same time as “Rock Around the Clock” but failed to knock it off the charts. Sometimes, timing is everything.