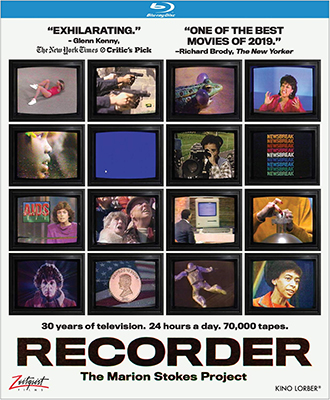 There’s almost certainly a link between a certain kind of genius and a certain kind of madness, which is one of the themes of Recorder: The Marion Stokes Project — director Matt Wolf’s graphically sophisticated documentary about a most unusual woman who was on a mission. Though at times, even Stokes herself might have wondered what it was, exactly, despite lucking out posthumously in ways that now invite cautious reverence, at least from researchers and chroniclers of relatively recent lost history. The last involves the period between the mid/late 1970s and the Sandy Hook massacre, which occurred on the day she died.

African-American Stokes came from enough Philadelphia money to stoke her undertaking — and then her ground-floor purchase of Apple stock (Steve Jobs was one of her eclectic but intense passions) set her up for about 50 lives’ worth of funds. This abetted her recording of everything off the air with the first of countless VCRs —  though initially, she  began more modestly, with sitcoms like “All in the Family” and especially the original TV incarnation of “Star Trek,” whose melting-pot crew and its relative communal status appealed to her extreme Left-ish political beliefs. Actually, she was a full-fledged member of the Communist Party, so despite her arguable genius, she had her limitations — serving both as a key player in the post-Revolution “Fair Play for Cuba” Committee (now there’s a blast from the past) and an unsuccessful attempt to move with her first husband to Cuba.

The turning point was the Iran Crisis and the launching of ABC-TV’s “Nightline” with Ted Koppel, whose surprising success against Johnny Carson and other fun-oriented late-nights anticipated 24-hour news stations — as well as the blurring between straight reportage and the ratings benefits accrued from turning political events into a kind of sophisticated daily mini-series. Stokes was extremely savvy on this kind of thing, which included the “coloring” of the news. She not incorrectly sensed, from what she was recording and watching, that the seized hostages in the Iran affair almost certainly had to include CIA personnel. What bothers me some about this is that all governments have agendas and always have — the way that most humans do unless they’re a little on the simple side. This is definitely dog-bites-man material.

Earlier, Stokes herself had hosted a Philadelphia political talk show that looks like public access but may have had a network-affiliate public service connection. A couple of those episodes are included as a Blu-ray bonus via what, like the Stokes archival project itself, is a miracle of preservation taken from long outdated technology. In it, she shows herself to be a good listener to guests invited on for their diverse points of view — a trait she didn’t display toward anyone in her family. An exception to this may or may not have been John Stokes, the professional partner and co-host of her show who became husband No. 2. A white patrician who later benefitted as well from that early Apple stock purchase, he left his wife (for good) and daughters (mostly for good) to devote his now-reclusive entire life to Marion. He’s the kind of guy of whom my Marine D.I. father like to describe as “for someone his age, he’s not wired together right.” But, hey: We live in a pluralistic society.

Good listening wasn’t a trait that extended to Stokes’s family life, and she made things miserable for her ultimately devoted chauffeur and personal assistant (both interviewed here) whose main job was to record — all the time. She made life impossible for her son from marriage No. 1 (Michael Metelis), even though he was a really good kid and smart as hell in ways that were too conventional for her (she owned somewhere between 40,000 and 50,000  books and read them). She had husband Stokes so cowed that when one of his daughters stalked him into having a brief conversation in the park, he implored her not to tell Marion.

Ultimately, she amassed 140,000 VHS tapes and was wealthy enough that she could store them in her apartments, leaving more room to pack-rat other possessions. Someone here makes the interesting and credible observation that hoarders keep what no one else wants, while collectors stockpile rare treasures that somebody somewhere would likely covet. In terms of her recordings, at least, she was in the latter category, and her collection of national and local coverage of racially motivated police brutality can almost stand alone. But in terms of “mission,’’ she was working with outdated technology on its way to becoming all but permanently unavailable, which meant time wasn’t on her side.

After her death, her son very eventually found the Internet Archive, which was probably the only place capable of copying this trove. Director Wolf comes up with some exceptionally impressive visuals that capture the true scope of Marion’s combined holdings when boxed up, to say nothing of lifting a full clip history of Stokes’s chronicled era, which even includes sporting events and the kind of oddballs who used to appear daily on Phil Donahue’s show. My favorite one splits the screen into four sections to show us simultaneous real-time footage of how quickly NBC, ABC, CBS and Fox were to interrupt the usual morning-show business to cut to the first plane hitting the first WTC tower on 9/11.

Director Wolf caught a major break when son Michael turned out to be so smart, articulate, philosophical and finally loving of his mother after a very difficult upbringing that many people wouldn’t have survived. That he can relate the personal-story part of the documentary with such objective clarity frees up Wolf’s very fine commentary to concentrate not exclusively but primarily on the technical and labor-intensive efforts by Stokes, himself and the Internet Archive to make the material a reality — and into a viable format.

On a work-obsession level, Project reminds me a little of Finding Vivian Maier, the doc about the American street photographer whose holdings proved to be amazing after she died. As a portrait of an exceptional talent incurring misery on her family while fighting her own demons, it reminds me a little of Liz Garbus’s What Happened, Miss Simone?, the Oscar-nominated and exceptionally great portrait of its “Miss” (Nina Simone). But due to the specialized achievement of its subject, Project kind if stands alone, even though Stokes had one of those personalities that no one will be fully able to read.