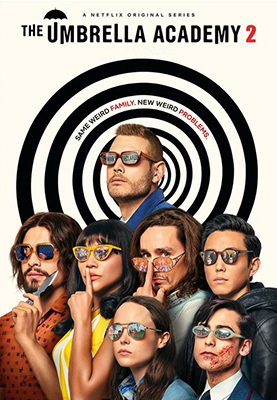 Season two of the Netflix series “The Umbrella Academy,” which debuted July 31, is a binge-worthy, action-packed, emotional roller coaster, although it suffers from a few contrived plot points.

As the season begins, the time jump that left us on the edge of our seats at the end of season one goes awry and scatters the superhero siblings in time in and around Dallas over a three-year period starting in 1960. Some, having been stuck in the past for years, have built lives and moved on, certain they’re the only ones who have survived.

The villains this time around are a trio named “The Swedes” who are there to prevent Five from again changing the timeline as it seems the siblings brought the apocalypse back with them. “The Swedes” fulfill the same role as the iconic Hazel and Cha-Cha from season one, but they lack the same charm and comedy that made the original duo such a great part of the show. This new trio seems to have a greater history that unfortunately doesn’t get explored, leaving us with little attachment to their story.

While we may not get much in terms of backstory on “The Swedes,” season two isn’t lacking in expanded history for the members of the Umbrella Academy. We get to see more background behind the interpersonal connections of the different siblings, as well as how it affects their interactions now. The characters we already grew to love in the first season only become more fleshed out.

However, the plot sometimes bogs down in order to present the emotional aspect of the show. Some episodes seem stretched to fill the season, as certain conflicts feel unnecessarily manufactured.

Still, despite a few weaknesses, season two is a satisfying continuation to season one of the comic book-based series, and it leaves us waiting in anticipation for the future of the Hargreeves siblings and the Umbrella Academy.