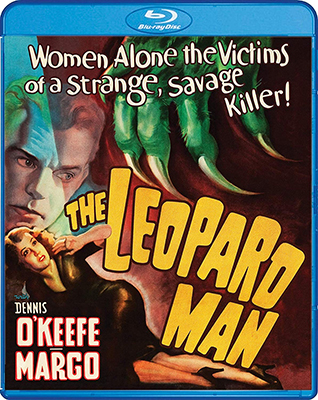 Directed by Jacques Tourneur shortly after he and producer Val Lewton turned The Cat People into one of the most profitable sleepers of the entire World War II movie era, 1943’s The Leopard Man was the third of nine creepy features Lewton made for RKO during his famously remarkable run from 1942 to 1946. It is also, for some, the most problematic due to its unusual story construction, and it didn’t help matters that when Warner Home Entertainment released an overall terrific Lewton box in 2005, The Leopard Man print was the one entry whose print didn’t look very good.

This second problem has been solved by this new Scream Factory release of a new 4K remastering off the original negative; seeing it at its best, one marvels (at least in its interiors and street scenes) how Lewton was able to create an acceptable New Mexico town on 59 cents and a lot of sets/costumes scavenged from past RKO films. Beyond this, was there ever a movie from that studio that didn’t benefit from its Roy Webb score? I only have to hear a few strains from any of them to be transported back to a TV set in the late ’50s and early ’60s, when the RKO catalog got played to death by local stations everywhere. Welcomely.

The structural oddity of this 66-minute feature (which was actually cut some for its re-issue before the footage was eventually restored) has to do with the lobbing of its most chilling salvo so early in the picture. A borrowed leopard from a traveling circus has escaped town and nocturnally kills a screaming young girl (after a late trip to the store and then a desperate chase to her front door). Mom’s inside, and she’s temporarily miffed at her daughter’s tardiness; as a result, she takes her time answering it until the screams and pounding get a little too insistent, by which time, it’s too late. One can easily see why The Exorcist director William Friedkin calls this one of the great horrific suspense scenes of all time, which it is.

Even though this set piece is powerful enough to carry a bottom-line interesting curio over its short running time, the movie does peak early — though it is interesting to see how the borrowed leopard escapes in the first place. An overeager press agent (Dennis O’Keefe) borrows the creature to upstage in real time the nightclub act of a rival to one of his clients; spooked, the animal escapes and runs out the entrance into the night. It’s really tough to see how the leopard could possibly be rattled; it’s only hit by nightclub lights, well-dressed patrons reveling at their tables and the fact that the rival performer (Margo) is insistently playing her castanets.

Margo, who should have had a better career, is really good as the woman who for a while is the central character — worried about what a local fortune teller’s “cards” might hold. Previously memorable in Lost Horizon and (if memory serves) her screen debut in the Ben Hecht-Charles MacArthur Crime Without Passion, she was apparently politically blacklisted in later years — though you’d think that just the fact that she was married to Eddie Albert (who reputedly rescued 70 Marines at Tarawa) would have gotten her over that hump. As far as I know, I hosted Margo’s last public appearance of note a little more than a year before her death — an impromptu affair when we pulled her out of the audience at the AFI Theater when I was interviewing Albert in stage during a weekend tribute that included a sell-out Green Acres afternoon. (Footnote: He was so happy to learn that he and Acres were in Gene Sculatti’s must-read Catalog of Cool — along with 3D View Masters and Louis Prima — that I gave him my copy.) But I digress.

O’Keefe was around in bit parts forever before kind of making it in the mid-’40s and early ’50s as a dependable ‘B’-movie regular. He wasn’t an actor of much depth, but he had a likable presence both in light comedies and crime melodramas (I was surprised by how easy he was to take playing an insurance investigator during my recent viewing of the 1949 ‘B’-pic Cover Up, which you wouldn’t really expect to be on Blu-ray but is). With a few exceptions, ‘B’-pictures are what he made, as with the first movie I ever saw him in (a theatrical first-run of 1955’s Chicago Syndicate, a passably time-killing glob of Sam Katzman/Fred Sears cheese whose ad copy could and should have screamed, “And with Xavier Cugat as Benny Chico”). The Leopard Man is one off the few O’Keefe movies whose title might spark recognition by the non-hard core that nonetheless knows a little something about the movies.

Instead of his character being arrested on some kind of charge after the first killing (yes, there are more) or having Nancy Grace put him on her hit list, we’ll note that this was a nowhere Southwestern town away from big-city forces, though you’d think that some of its young men would have been draft-eligible. (WWII is rarely, if ever, a force in Lewton horror, even those few taking place in time settings or milieus where it would apply.) Instead, O’Keefe and the performer he manages (Jean Brooks, a versatile actress who succumbed to alcohol) are allowed to sleuth the case — which becomes a case with each new homicide. The victims are always young women, which gets increasingly suspicious, leading some to wonder if the cat really is responsible. As in the first killing, Tourneur gets a lot out of his “is the creature nearby?” scenes, including a beaut where you can’t tell if a tiny speck of light at night is the cat’s eyes or a reflection of something.

There are two bonus commentaries — one by Friedkin, the other a highly informative nuts-and-bolts one by film historian Constantine Nasr that gives a compelling back-dropper about the kind of miserable-sounding life that source author Cornell Woolrich seems to have led. These voiceovers are complementary, with Friedkin mounting a vigorous defense of the picture while acknowledging certain shortcomings. Even though The Leopard Man tends to take up one story, drop it and go on to another with perhaps a haphazard sense of direction, Friedkin likes this structure and offers a brief that this was one of the first modern Hollywood movies of its type due to its unconventional, non-linear storytelling. As with Alfred Hitchcock pulling the rug out from Janet Leigh a third of the way into Psycho.

I can’t say I totally agree, though I do see his point, which had not occurred to me before. And besides, Lewton follow-up The Seventh Victim doesn’t cohere particularly well, and yet it’s probably my favorite of the series (out of four or five contenders) because I can think of few Hollywood films from the 1940s that so get under your skin. This is a great service that Shout/Scream Factory is performing, getting this milestone collection out in even better prints than I was able to get for the AFI Theater when I was programming. I would really salivate to see Victim and I Walked With a Zombie, in particular, get their Blu-ray day.